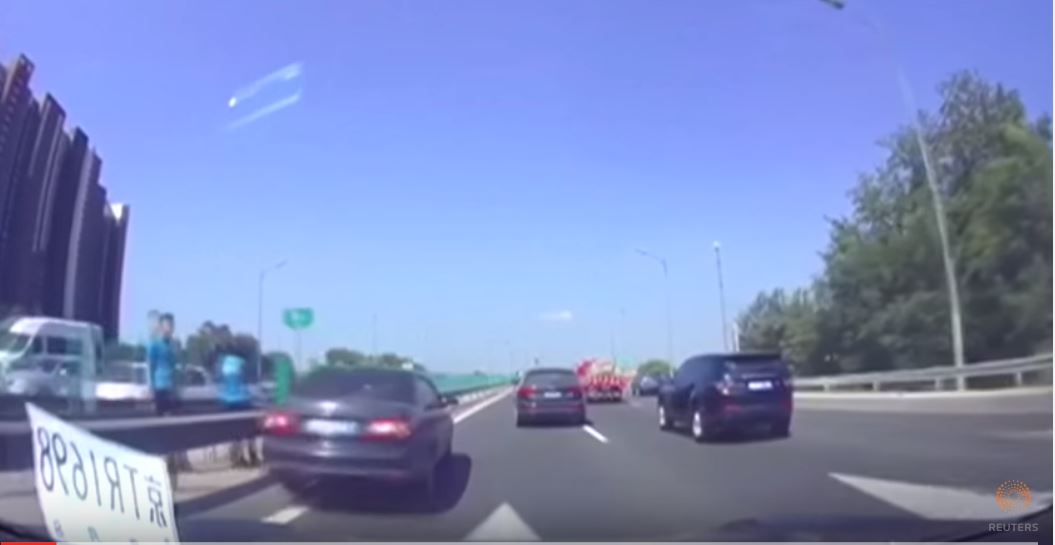 The first crash in China involving a Tesla operating in Autopilot mode occurred last week. Luo Zhen, a 33-year old programmer, says he was driving to work on the highway using Autopilot when his car struck a disabled vehicle stopped half in the left lane and half in the breakdown lane. The collision sheared off the driver’s side mirror and caused exterior damage to both cars. There were no injuries reported.

The accident is eerily similar to one that happened earlier this year to a motorist in Europe whose Tesla struck the rear of a disabled van on the highway. Tesla confirms the car was in Autopilot mode at the time, but says Luo did not have a hand on the wheel at the time.

“The driver of the Tesla, whose hands were not detected on the steering wheel, did not steer to avoid the parked car and instead scraped against its side,” a Tesla spokeswoman said in an email to Reuters. “As clearly communicated to the driver in the vehicle, autosteer is an assist feature that requires the driver to keep his hands on the steering wheel at all times, to always maintain control and responsibility for the vehicle, and to be prepared to take over at any time.”

Luo, sees things differently. He says the warnings and restrictions referred to by the Tesla representative were not clearly communicated to him at all. He claims the sales staff at the store where he bought his car told him the car was “self driving.” He told Reuters, “The impression they give everyone is that this is self-driving, this isn’t assisted driving.”

Reuters interviewed four other Tesla owners in Beijing, Guangzhou, and Shanghai. All of them reported that Tesla’s sales staff described the Autopilot system to them as “self driving,” not as an advanced driver assistance system. They all claim that Tesla salespeople all removed their hands from the wheel during test drives. Chinese law currently requires all drivers to keep two hands n the wheel at all times.

Language issues may be to blame for the confusion. “We have never described autopilot as an autonomous technology or a ‘self-driving car,’ and any third-party descriptions to this effect are not accurate,” a Tesla spokeswoman said. But on Tesla’s Chinese website, it uses the phrase “zidong jiashi” several times. That phrase literally means “self driving.” It is also the term used to describe auto pilot systems used by airplane pilots.

Unhappy with Tesla’s response to his accident. Luo posted the video from his dash cam on Chinese social media platform Weibo. He says he had been using his car and its Autopilot feature for about a month. He admits he was checking his phone or watching his car’s navigation screen at the time of the accident and only looked up every few seconds.

Luo blames Tesla’s hard sell about what Autpilot can do for his behavior. “They use this immature technology as a sales and promotion tactic, but they don’t take responsibility for the safety of the function,” he says.

Despite Tesla’s protestations that it is not responsible, it appears its sales staff is saying one thing while the company is saying another. Even the local Tesla website may be misleading people. It will need to solve is communication issues quickly if it wants to avoid negative publicity in the hugely important Chinese market.