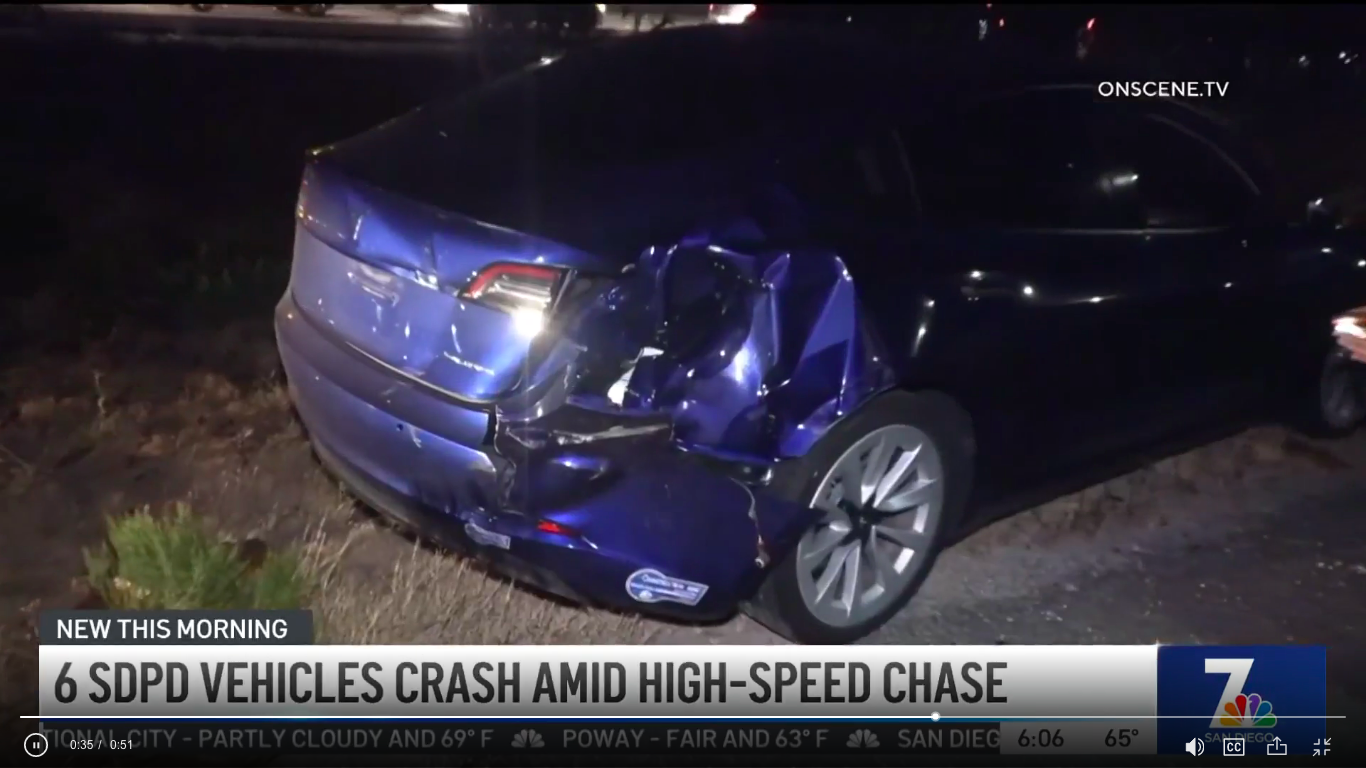 In a scene straight out of a movie, the owner of a Tesla was a bystander whose vehicle was unexpectedly impacted by a wild high-speed chase.

The chase led to the Tesla, 6 San Deigo Police Department vehicles, and the stolen truck being crashed.

The chase lasted around 15 minutes.

The police were after a suspected stolen truck.  A caller reported that they’d seen someone driving their stolen truck.

Officer Darius Jamsetjee told NBC San Diego that the driver of the truck took off when police tried to pull it over.

This led to an intense 15-minute high-speed chase involving officers on the ground and a helicopter.

The thief then switched several highways and exited at Highland Avenue where she rammed three police cars intentionally.

“Ultimately, at the 54 and Highland Avenue, the vehicle did intentionally ram three of our police vehicles,” Jamsetjee told NBC San Diego. “There were no injuries associated with that collision.”

After ramming the three police vehicles, the truck driver hopped back onto the highway where she crashed into the back of a blue Tesla.

After slamming the Tesla, the woman driving the stolen truck was ejected from the vehicle onto the roadway.

As the truck flipped off the highway and into a ditch, three other officers ended up crashing. The first slammed the brake to avoid hitting the woman on the road. The other two crashed into the back of the first.

There was also a passenger in the stolen truck. Both the driver and that passenger were taken to the hospital. One of the officers was also injured. They complained of pain due to the collision.

Teslas Are Some Of The Safest Cars

Although the report didn’t mention whether or not the owner of the blue Tesla was injured, Teslas are known to be some of the safest cars that the National Highway Administration Transportation Authority has ever tested.

In a short video clip by NBC San Deigo, you can see the blue Tesla for a quick second. It looks like it could be a Model 3 or Y but I am not certain.

Both the Tesla 2022 Models 3 and Y won the Top Safety Pick+ from the Insurance Institute for Highway Safety (IIHS). You can read more about that here.