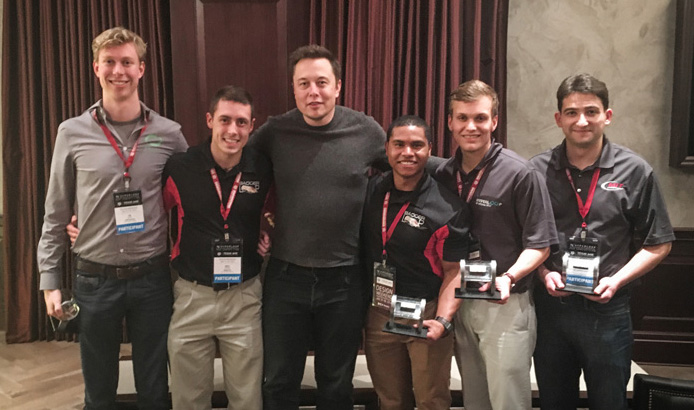 If you did a timeline of all the major Elon Musk announcements in the last five years, it would have a lot circles on the X axis. One circle would include the Hyperloop white paper.

Musk “dropped” off the concept to the world back in 2013 and moved on. However, last year Musk and SpaceX introduced a Hyperloop pod competition for college students to take place at SpaceX’s test track in August 2016.

Most Elon Musk devotees probably know a bit about the Hyperloop white paper released in 2013 and how this “fifth mode” of transport offers a low-cost solution versus high-speed rail proposals floating around the U.S.

The Hyperloop concept from Musk involves a low-pressurized air tube structure — say from San Francisco to LA — and propels passengers in a “pod” compartment at speeds of more than 700+ mph. The pod shoots through this low-pressure tube with induction motors intermittently placed in the track that moves the compartment. These motors “would provide a reboost roughly every 70 miles,” according to the paper.

After seeing SpaceX land a rocket on a tiny barge in the ocean, this doesn’t seem so far-fetched. Companies like Hyperloop Technologies and Hyperloop Transportation Technologies are currently working on proof-of-concepts and test tracks.

In January 2016, SpaceX held the Hyperloop Pod design competition at Texas A&M and evaluated more than 124 concepts, which included best overall concept and innovation. Thirty plus university teams were picked to move on to competition weekend at SpaceX’s Hawthorne facility, where a mile long test track — six foot in diameter steel tube — is being built.

The MIT Hyperloop team won the best Overall Design Award while the Pod Innovation Award went to the Delft Univ. of Technology in the Netherlands. The event also awarded BadgerLoop, from the Univ. of Wisconsin, with the 3rd place and the Pod Technical Excellence award.

BadgerLoop’s pod will reach speeds of up to 200+ mph in a matter of 15 seconds with a run lasting approximately 43 seconds.

Being based in Chicago, I reached out to the BadgerLoop team in March and interviewed multiple members of the team, including a Co-President, the Electrical and Controls Manager and, of course with Hyperloop, the team’s Levitation Lead.

Teslarati: So how many students are on the BadgerLoop team?

David Van Veen, Operations Director: We have a 150 dedicated members helping in all aspects related to the competition and have about 75 student engineers working on the pod project.

Brett Sjostrom, Co-President: We have something special with this team, we’ve been engineering students for three or four years and BadgerLoop is going up against teams with much more experience. The MIT Hyperloop team is made up of graduate students and some of those folks interned at NASA, SpaceX and Boeing.

The aluminum sub track in Hawthorne will be flat and this allows the BadgerLoop team to move past the air bearings concept from Musk’s white paper. BadgerLoop is implementing a Halbach Arrays concept.

Sjostrom: Halbach arrays are a certain configuration of magnets that amplify the magnetic field on one side, and negate it on the other side of the array. Passing this array over the aluminum sub track creates eddy currents which give our pod its levitation.

Teslarati: How does your Hypeloop pod differ from other teams?

Van Veen: Other teams are using passive Halbach arrays which provide just vertical levitation but there’s no forward propulsion to it.

Bill Carpenter, Levitation Lead: Our design creates drag from the levitation but by spinning the wheels — using drag — in the opposite direction, we can create thrust to move the pod forward. Our pod has a total of ten Halbach Array wheels, four in the front and back, and two in the middle.

So, it’s negating our drag and providing a truly frictionless ride. It’s also providing that contactless stability in all directions. Plus, it’s an active system so we can control it, speed it up or slow it down. Here’s an example of BadgerLoop’s Halbach arrays on a wheel. The configuration of magnets amplifies the magnetic field on one side, and negate it on the other side of the array. Passing this array over the aluminum sub track creates eddy currents, which produces the pod’s levitation.

Obviously, stability is important with a $150 million test track located next to the company’s headquarters. Most of SpaceX competition specifications for a test run involve many safety hurdles to actually get on the track in August.

According to Badgerloop, these pods will reach speeds of up to 200+ mph in a matter of 15 seconds with a run lasting approximately 43 seconds. That’s why BadgerLoop’s pod will have more than 140 sensors on board for real-time safety data and avoid overheating motors and other components.

Teslarati: Can you provide an overview of your pod controls and sensors?

Eric Amikam, Electrical Team Lead: Our pod will have 114 sensors. These include proximity sensors for between the pod and the rail, acceleration and gyroscopic data. We’re also taking in almost 50 different temperature points that create a full, live thermal heat map of our pod.

Teslarati: Why so much thermal sensing?

Eric Amikam: We’re in a vacuum and don’t have the benefit of convective heating like you normally do, so we have to make sure that everything is very thermally regulated. We have a variety of thermistors placed all throughout the pod and it goes to one central location. We can look at our dashboards in the middle of a run.

If one of our motors is getting dangerously hot and we don’t want to break that motor, we can just shut it off remotely.

Eric Amikam: In a couple months here, we will have a full simulation from dynamic model via CANalyzer from Vector — Tesla Motors uses the using the same software. The simulation allows us to infer “over the course of these 42 seconds, here’s what all of the sensors should see.” Then, we’ll fake all that data in our CAN bus, at the hardware level, and see how the system reacts. From there, and we can fine tune it, debug, test out our fault codes and start up sequences.

Sort of a Big Deal (Not Ron Burgundy)

Of course, meeting the International Man of Action, Elon Musk, was a bonus for Co-President Sjostrom and Tieler Callazo during the Design competition at Texas A&M.

“The lead SpaceX Hyperloop engineer appears on stage and says there’s been a recent hashtag on Twitter about where’s Elon. And we’d like to answer that question,” says Sjostrom. An early look at BadgerLoop’s pod at the Univ. of Wisconsin.

Then, Elon Musk walks out.

The top four teams’ presidents were able to meet with Elon Musk one-on-one and discuss their pod designs. “We were waiting for Musk to finish his conversation and all the other team presidents were just repeating, ‘We get to meet Elon Musk, this is awesome.’”

Sjostrom adds “Musk thought it was pretty impressive that the top four teams were doing magnetic levitation and the first Hyperloop would probably be a wheeled vehicle, just like a proof of concept.

BadgerLoop is building the aluminum pod as the semester winds down and hopes to start integrating the different sub-systems and apply the carbon fiber skin in May. The team is utilizing workplace Slack software to help organize and oversee 40 members on the electrical team, for example. BadgerLoop will have to rely on remote collaboration as some team members graduate in May.

“Regular students go to bed and we keep working,” says Van Veen. “The only issue is when do we sleep. That’s probably our biggest challenge to be honest.”

Looks like Musk is preparing the students for careers at Tesla Motors, SpaceX or Hyperloop.

* All the Hyperloop college teams are looking for funding as this is a capital intensive project. You can donate to BadgerLoop by visiting this page.