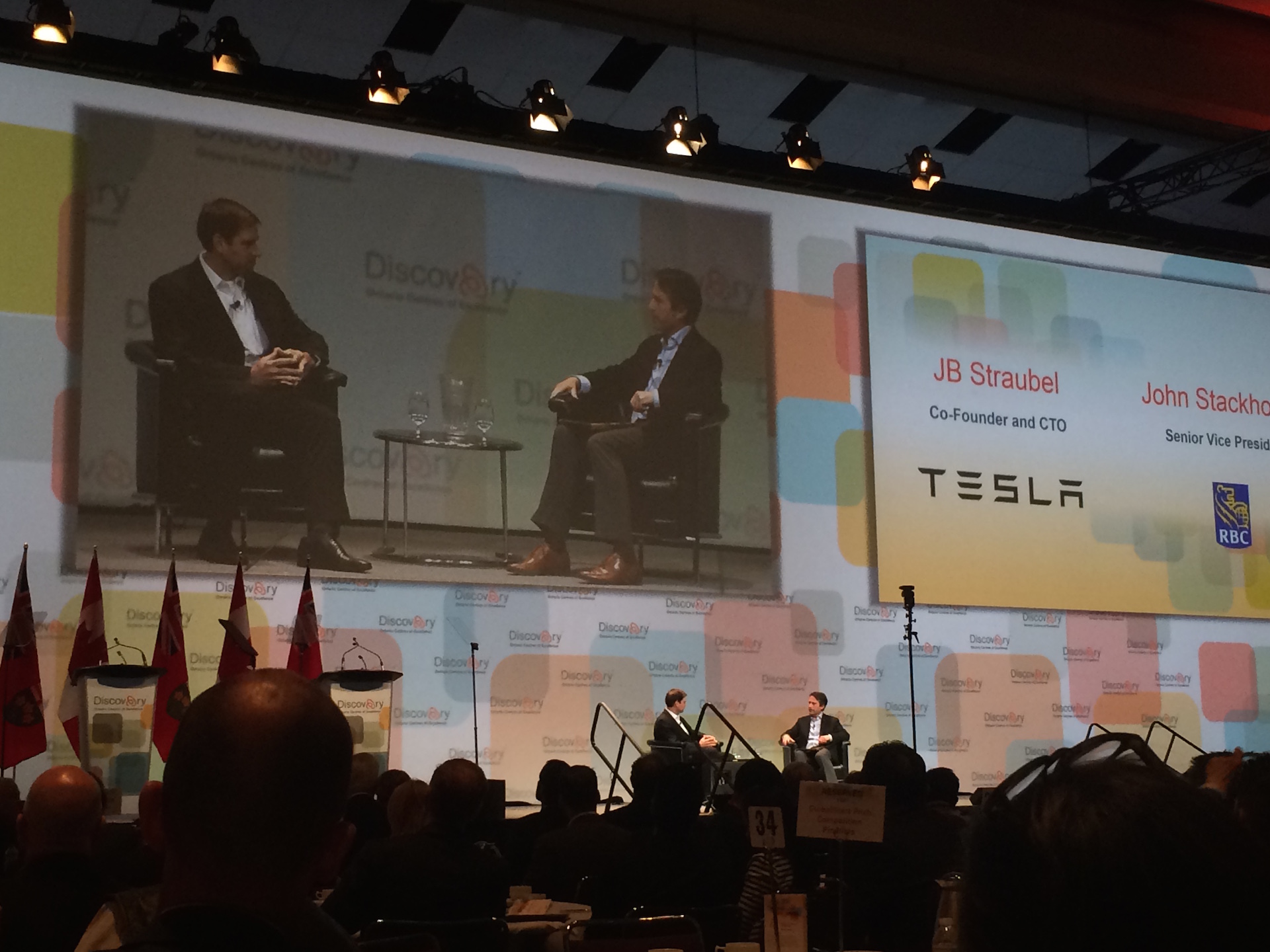 Tesla CTO JB Straubel talked about building batteries at the Gigafactory during his keynote address at the Discovery 16 conference in Toronto on Monday. Sponsored by the Ontario Centers For Excellence on Monday, the conference is one of the largest and most important technology meetings in Canada each year.

Tesla wants to reinvent the automobile manufacturing process at its Fremont factory so it can build hundreds of thousands of Model 3 cars. At the same time, it is also reinventing the battery manufacturing process so it can build enough batteries to accompany the growing demand for the Model 3. In effect, its promise to build 500,000 cars a year by 2018 doubled the global demand for lithium ion batteries overnight.

The central idea behind the Gigafactory is to bring the entire battery making process under one roof. From manufacturing individual cells to assembling completed battery packs, everything takes place under one roof. Other companies make the battery cells in one location, then send them someplace else — often in a different country — to be made into completed battery packs. Inverters and battery management systems are also made elsewhere and shipped in separately.

Straubel told his audience that Tesla is designing new manufacturing techniques and using new machinery invented and honed under his guidance to make its batteries. The objective is to reduce the unit cost of the lithium ion batteries that power Tesla automobiles as low as possible.

During last week’s conference call with analysts, Elon was asked what that final cost would be. He had this response: “We’re trying not to comment on individual component costs. That’s fairly proprietary. It’s kind of like giving away our playbook. But I think it’s pretty obvious that we will exceed anyone else in the world in scale economies with the Gigafactory, and we’re very confident in Panasonic’s ability to execute on that front. So I just don’t know anyone who in terms of intrinsic cost is going to be close to what the Gigafactory can produce on a cost per kilowatt hour basis.”

Straubel also told the audience that he originally tried to talk Elon into building an electric airplane prior to embarking on the mission to build electric cars. “The biggest challenge for electric aviation is that it needs much higher energy density to achieve longer ranges and longer endurance”, says Straubel.

An electric airplane would fit well with Musk’s stated goal of reducing global carbon emissions. Airplanes contribute an enormous amount of greenhouse gasses and inject them high within the atmosphere where they cannot be readily absorbed. Might Straubel’s idea still be lurking somewhere in the back of Elon’s mind?