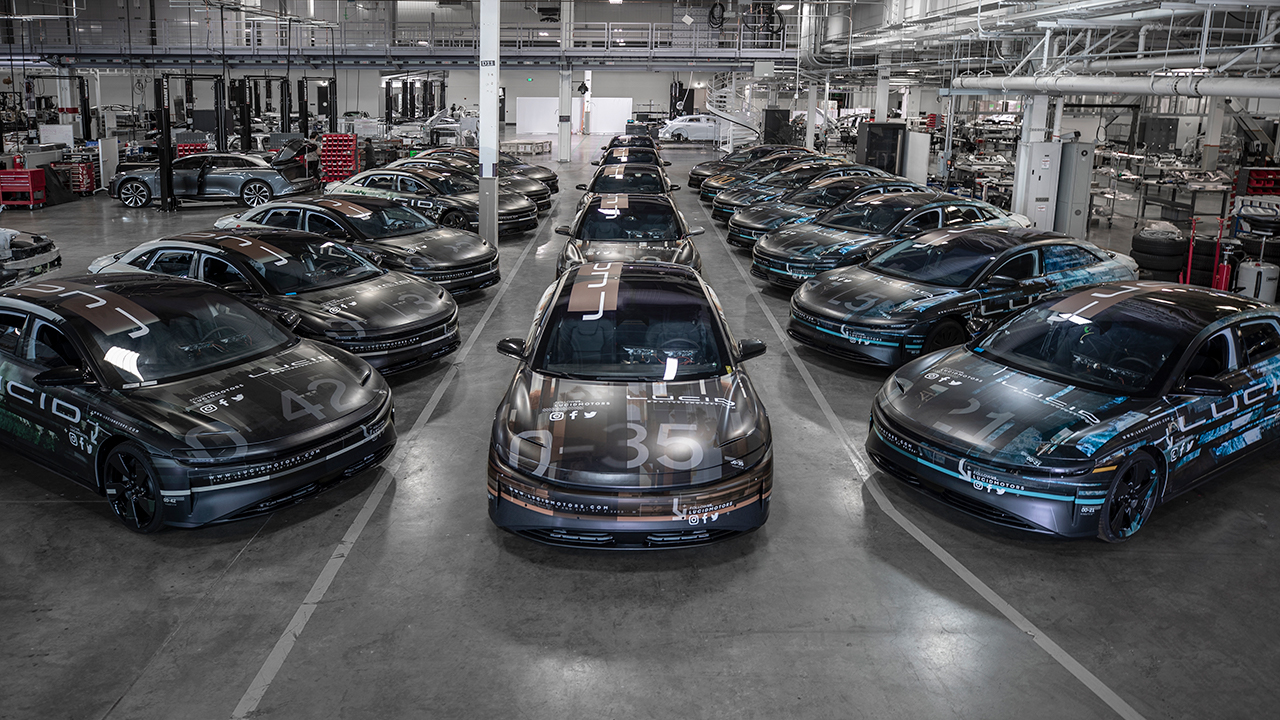 Lucid showcases large fleet of Air prototypes, has plans to ramp even more

Lucid Motors, an electric vehicle startup based out of Silicon Valley, California, recently released a rare view of over 40 prototypes of its first electric vehicle, the Air sedan.

Lucid recently announced that it had expanded its market into the Middle East, making its soon-to-be-produced vehicles available in North America, Europe, and Saudi Arabia and the United Arab Emirates.

The electric vehicle startup has been developing the Air since December 2016, when the company unveiled the sedan. Since that time, the automaker has worked toward improving its performance and range, aiming to compete with electric vehicle powerhouse Tesla, which is based just a few minutes away from Lucid in Fremont, California.

Lucid’s prototype fleet is comprised of over 40 vehicles, and the company plans to add dozens more, according to a press release.

The prototypes have been collecting information and data for Lucid engineers to gather and analyze as the company continues to refine the finer points of its first vehicle. Each of the cars has a specific purpose. Some have spent time in Minnesota’s frozen tundra for weather dependency testing. Others are subjected to extensive range assessments by driving from San Francisco to Los Angeles on a single charge.

Currently, testing for these vehicles is on hold because of social distancing measures. As all of its Beta prototypes sit inside of its Silicon Valley headquarters, Lucid shared images of its debut vehicle sporting four distinctly different camouflage wraps, each of which will be detailed in an upcoming story from the automaker.

The Air is a dual-motor electric sedan that will have 1,000 total horsepower and an estimated top speed of 217 mph. However, its performance may not be the most impressive statistic the car holds. After its 400-mile journey from its corporate headquarters in the Bay Area to Santa Monica Pier in Los Angeles on a single charge, Lucid proved its vehicle would compete with some of the longest-range EVs on the market today.

The company was established in 2007 and is backed by numerous investors. The largest is the Public Investment Fund of Saudi Arabia, which provided Lucid with a $1 billion investment in September 2018. The investment from the Saudi Arabian fund helped Lucid fund the construction of its $700 million production facility in Casa Grande, Arizona. The facility began construction in late 2019, and Lucid intends to start producing the first variants of the Air by the end of 2020.

The Air is expected to cost $60,000 for United States buyers. Lucid intends to begin fulfilling orders for its Middle East-located customers during the latter half of 2021, with details on pricing, product specifications, and available configurations to be determined when production officially begins.

Watch Lucid Motor’s video of its Air prototypes below.

Lucid showcases large fleet of Air prototypes, has plans to ramp even more