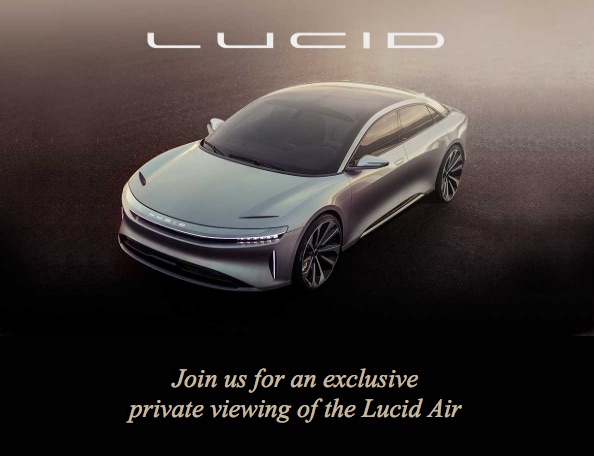 Lucid Motors, the Silicon Valley electric car startup looking to take on Tesla in its own backyard, will be holding a private viewing party for its 1,000 horsepower ‘Air’ in Los Angeles this weekend. Email invitations were sent to media along with friends and family of the company informing them of the two-day event. The first event will take place Saturday evening at a notable museum in Los Angeles where test rides of the Air will be given. Attendees of the event will also have a chance to talk one-on-one with the Lucid marketing and design team. The second of two events will take place at a private estate in Newport Beach, California on Sunday.

Until now, the electric car hopeful has remained relatively quiet about developments taking place behind closed doors from its Menlo Park facility. It’s a far departure from other would-be Tesla competitors, namely Faraday Future, that has taken a more aggressive, and arguably more controversial, marketing stance.

Lucid’s ultra-luxury four door electric sedan was recently spotted testing on the streets of San Francisco. And in an official teaser video (embedded below) released by the company today, we get a glimpse of how the Air’s dual motor, all-wheel drive electric car, with the assistance of torque vectoring, can tackle even the snowiest of winter conditions.

It’s unknown at this time the extent of the test rides that Lucid will be providing at the viewing party, but we’ll be there to capture it all. Follow us @Teslarati or Like us on Facebook to go behind the scenes at Lucid Motors’ upcoming private viewing party.