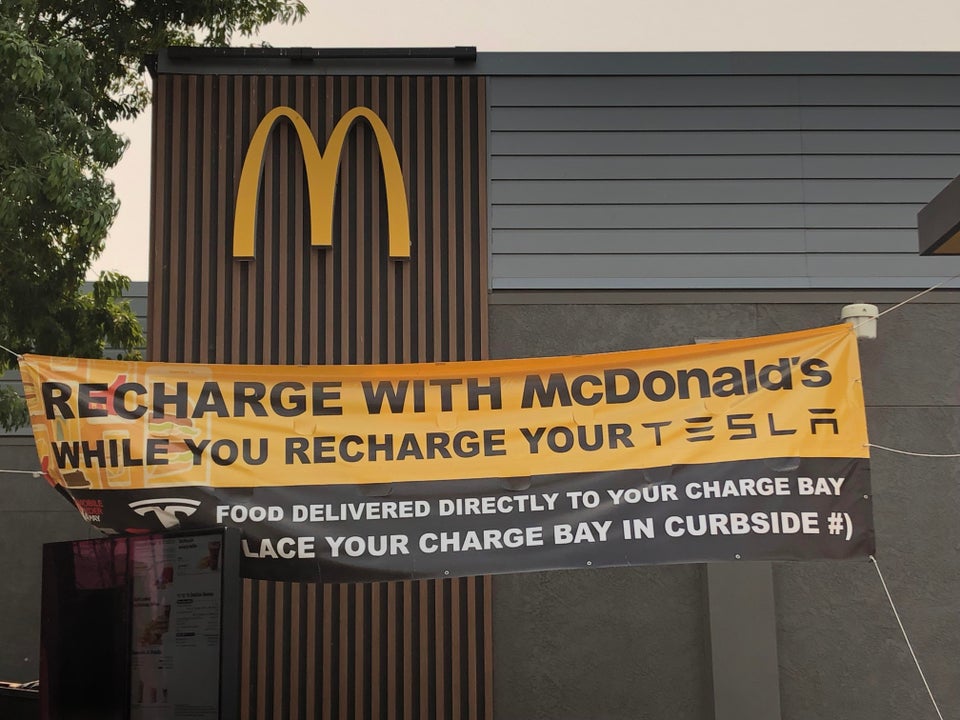 A McDonald’s franchise in Firebaugh, California, is piggybacking off of the Firebaugh Tesla Supercharger station, which is the largest in the United States. Attracting customers to the Golden Arches isn’t too difficult, to begin with, especially when the fries are hot and the Sprite is cold. However, Tesla owners may now have an extra incentive to visit the Firebaugh charger, especially since McDonald’s is reminding drivers that one of their franchise locations may be the perfect place to charge your body (kind of) while you charge your car.

We all know McDonald’s is not the most healthy option on the long and winding roads of California, but we do know that it is fast, affordable, and delicious a lot of the time. McDonald’s locations may be the perfect place to grab a bite and sit down outside of your car after a few hours of driving while your Tesla is charging nearby. The Firebaugh location is taking advantage of this mentality.

Reddit u/kesslertava posted a photograph of the Firebaugh McDonald’s with a banner outside of its parking spaces reading:

This is quite the strategy that McDonald’s, which stopped counting at 99 billion customers served in 1993, has employed, especially as its location already makes it a favorable stop for hungry drivers. However, piggybacking off the Supercharging process, which has decreased in length several times over the years thanks to faster charging speeds, is almost comical. Driving business from the Superchargers into the McDonald’s almost seems like the old dog is learning new tricks. McDonald’s has been around for decades, but Tesla only for less than two decades.

However, this McDonald’s location surely knows that catering to the Tesla owners who choose to charge up at the Firebaugh location are prone to spend their money at a location that acknowledges their presence.

We aren’t sure if this has driven business at this McDonald’s up through the roof. Still, there’s a possibility that the location’s busiest hours may directly correlate to the busiest hours at the Firebaugh charger. Nevertheless, McDonald’s also offers Tesla something: many locations and a lot of business. This could lead to an eventual partnership between the two companies for Superchargers, much like WaWa and Target have already done with Tesla charging points.

McDonald’s has 13,443 locations in the United States, and not all of them will get Tesla Superchargers; maybe none of them will. But if they do, it would offer Tesla an unbelievable range of potential Supercharger locations, adding to the already 20,000+ locations the automaker has established currently.