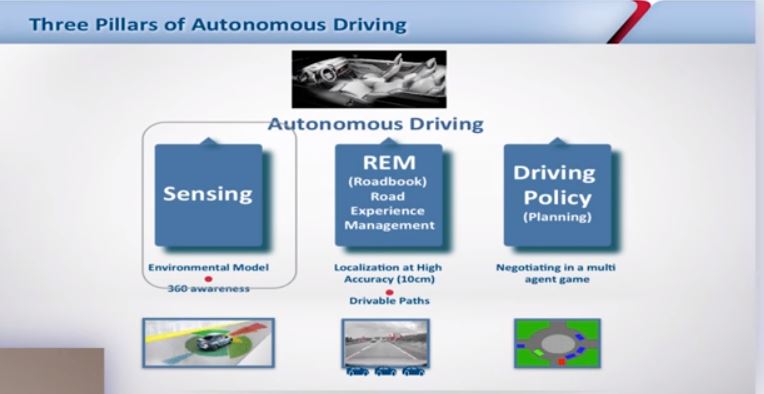 Professor Amnon Shashua, co-founder and CTO of Mobileye, gave a talk recently explaining how his company builds its autonomous driving systems. One point he emphasizes is that identifying other vehicles and people in the vicinity of the car is the easy part. What’s difficult to achieve is controlling the car so that it stays within the limits of the roadway, especially when road markings, curbs, and other indications of where the physical edges of the permissible driving space are lacking.

Shashua breaks the process into three main components — sensing, road experience management, and driving policy, which he calls “planning.” The first collates all the data coming into the system from cameras, radar, and, in some cases, Lidar. The second phase creates an environmental model that orients the car and determines its place on the road. The third phase uses all the prior information to determine all the available pathways forward and which is preferred.

Next, he goes on to speak in detail about what he calls “deep learning.” Shashua says despite its current popularity, there is a great deal of hype surrounding it. He explains why some aspects of deep learning fail to give the zero failure results required to make accurate autonomous driving possible. In particular, he shows why what he calls the “end to end approach” does not live up to its promise. He prefers what he calls “semantic abstraction,” a process that breaks down the tasks the system must perform into discrete subsystems, each with its own function to perform. He feels the latter is more accurate and gives the fewest false positives or false negatives. The end to end system does not require image annotations, but Shashua says Mobileye has 600 people on staff annotating images and expects to have 1,000 or more shortly.

What is important, Shushua maintains, is dealing with what he calls “corner cases.” These are the anomalies that happen in regular driving that are rare, unexpected, or unusual — like a construction vehicle moving slowly near a highway. It is those corner cases that require the most sophisticated technological solutions and the types of situations that end to end systems do not handle well.

Watch the entire 30 minute video for yourself to learn more about some of the elements that go into Tesla’s Autopilot technology.