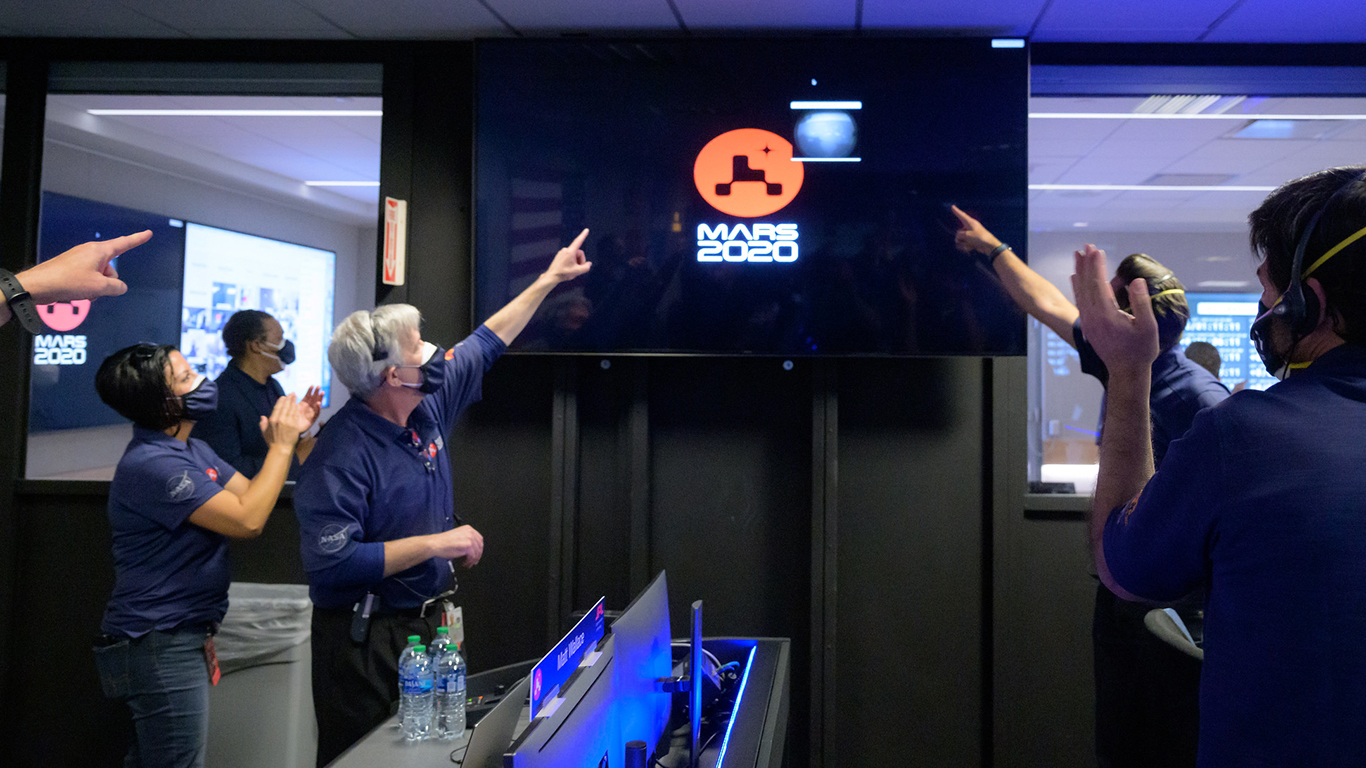 After a nearly 300 million mile (480 million kilometer), seven-month-long journey, the world watched as NASA’s Mars 2020 Perseverance mission successfully completed the most challenging and precise landing the agency has ever attempted on Thursday (Feb. 18). Perseverance is NASA’s fifth rover and overall ninth mission to successfully land on the Red Planet.

On Thursday afternoon, the alien invader punched through the relatively thin Martian atmosphere streaking across the sky at a blazing 12,100 mph (19,500 kph). Then it shed a few layers, deployed the largest-ever supersonic parachute, and slowed down just enough to use a rocket-propelled crane to drop an autonomous, nuclear-powered, robotic astrobiologist called Perseverance on the surface of Mars.

Flawlessly completing the entry, descent, and landing sequence of its mission to land in Mars’ hostile Jezero Crater, NASA’s Mars 2020 Perseverance mission officially marked the completion of its interplanetary travel phase and began its mission to collect evidence of ancient, microbial Martian life.

On July 30, 2020, NASA’s Mars 2020 Perseverance mission launched aboard a United Launch Alliance Atlas V 541 rocket from Space Launch Complex 41 at Cape Canaveral Space Force Base. Aboard that rocket was NASA’s most ambitious Mars mission to date. The launch phase of the mission suffered a few minor delays ultimately shifting the launch date from July 18, 2020 to July 30, 2020. However, ULA’s Atlas V first stage rocket and Centaur upper stage delivered NASA’s Mars 2020 Perseverance mission into such an accurate trajectory that the 2,260 lb (1,025 kg) rover landed on its specified February 18 landing date despite the delays in the launch timeline.

In total, three missions to Mars – China’s Tianwen-1, the United Arab Emirates Hope Probe, and NASA’s Perseverance – left Earth in the summer of 2020. All three missions targeted to leave Earth prior to August to best take advantage of the minimal distance between the planets during what is called opposition. The opposition between Earth and Mars only occurs once every 22 months. If the Perseverance mission had missed its launch date it would’ve had to wait until 2022 for a chance to travel to the Red Planet.

As Perseverance descended into the Martian atmosphere the Cruise Phase – hardware that propelled the spacecraft through space for seven months – was jettisoned. The Perseverance rover safely tucked inside the aeroshell and protected by a robust heat shield soared through the thin Martian atmosphere enduring an extreme amount of friction that produced heat energy that reached up to 2,370 degrees Fahrenheit (about 1,300 degrees Celsius).

Once through the period of peak heating the heat shield was jettisoned exposing Perseverance to the Martian environment for the first time. Then about 7 miles (11 kilometers) from the surface the largest supersonic parachute NASA has ever sent to another planet – 70.5 feet (21.5 meters) in diameter – was deployed drastically slowing the spacecraft.

While still descending, the controlled descent module – called the sky crane – separated from the backshell about 1.3 miles (2.1 kilometers) above the surface to free-fly in the Martian atmosphere. The descent module used a new landing technology called Terrain-Relative Navigation used a constant stream of visual input and guidance collected from the Vision Compute Element and Rover Compute Element to determine the safest reachable landing site.

The throttleable rockets on the powered descent module steered the rover to its landing spot in Mars’ Jezero Crater and slowed to approximately 1.7 mph (2.7 kph) about 66 feet (20 meters) above the Martian surface. Perseverance was then lowered using a system of Nylon cords which were autonomously severed upon touchdown. The final stage of the controlled disassembly was for the sky crane to throttle its rockets back up and fly away for a crash landing a safe distance from the rover.

Ultimately, the Perseverance rover landed about a kilometer south of the intended delta of the Jezero Crater.

Perseverance made it to Mars, now what?

Getting to Mars was only the first of many milestones that Perseverance is expected to achieve during its projected one Mars year-long mission – about 687 Earth days. Now that the rover has touched down the science will begin.

First and foremost once Perseverance stretched its legs, so to speak, the first event took place just minutes after landing. Perseverance captured photos of the Martian surface with a pair of engineering cameras called Hazard Cameras mounted to the front and back of the rover.

The upgraded Navigation and Hazard cameras feature the capability to capture imagery of the Martian surface in 20 megapixel high-definition resolution for the first time. In the coming days, more images will be relayed back to Earth taken with the rover’s Navigation cameras and Mastcam-Z.

Once on Mars, the control of the Perseverance rover was transitioned from NASA JPL’s EDL team to the Perseverance Surface team. The Surface Phase of the Mars 2020 mission – or the phase of the mission that consists of the four main science objectives – began about twenty minutes after the touchdown.

Perseverance was sent to Mars to determine whether life ever existed on Mars, characterize the climate, characterize the geology, and prepare for the eventual human exploration of Mars. To achieve these massive science goals, the robotic astrobiologist was sent with an impressive suite of scientific research tools. Over the next 30 Martian days – called sols – the rover will begin to unfurl and begin testing the various pieces of hardware in preparation for exploring the delta of Jezero Crater.

Perseverance not only took a roving science lab to Mars, but it also took the first rotorcraft helicopter to be deployed to another planet dubbed Ingenuity. Ingenuity is a small double-bladed rotorcraft weighing only about 4 pounds (1.8 kilograms).

After the initial 30 Ssls of stretching its legs, Perseverance will travel a short distance to find a flat area of the Martian surface to deploy the Ingenuity helicopter. Once deployed, the Ingenuity team will have a technology demonstration window of approximately 30 sols to complete the first flight test of Ingenuity – the first time powered, controlled flight will be attempted on another planet.

Landing is just the beginning

As exciting as landing on Mars was, it is only the beginning for the Mars 2020 Perseverance rover. The nuclear-powered astrobiology robot will spend the next Martian year excavating the surface of a very rich delta in the Jezero crater searching for the first evidence of ancient, microbial life.

Even more exciting is that Perseverance is only the first phase of a larger mission called the Mars Sample Return mission that will someday bring the excavated samples that Perseverance collects back to Earth in a joint effort between NASA and the European Space Agency.

Although the Perseverance mission is only intended to last one Martian year, Perseverance has the capacity to extend its mission to nearly 15 years thanks to its power source, a Multi-Mission Radioisotope Thermoelectric Generator (MMRTG) which produces a steady stream of electricity provided by the radioactive decay of plutonium-238. Perseverance could potentially outlast all of NASA’s other Mars missions.

Follow along as our team gives you their take on the biggest stories of the week.
NASA aces most challenging Mars rover landing to date