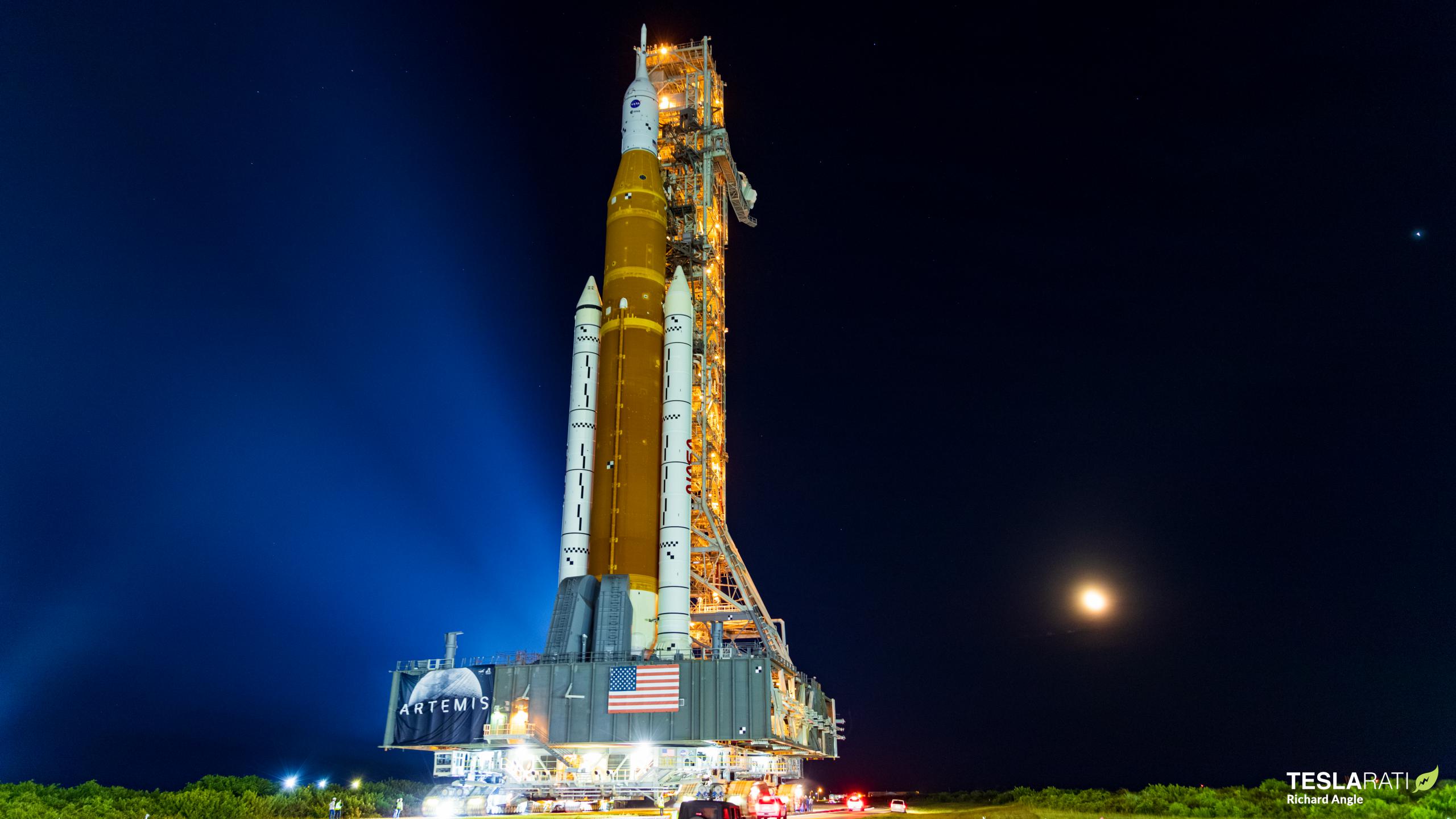 After rolling the vehicle to its Kenndy Space Center, Florida launch pad two days early for what is hoped to be the third and final time, NASA says that the first Space Launch System (SLS) Moon rocket is ready to take flight.

The Artemis I mission’s SLS reached Launch Complex 39B on August 17th after a 10-hour, 4-mile trip from KSC’s iconic Vehicle Assembly Building (VAB). NASA and its contractors spent the five subsequent days connecting the rocket to the pad and preparing both for flight – a process that will continue up until the moment the pad is cleared around a day or two prior to launch. On August 22nd, SLS and Orion program leaders completed a surprisingly clean Flight Readiness Review (FRR) for Artemis I, confirming that all related hardware, software, systems, and teams are (or will soon be) ready to launch.

Barring surprises, SLS remains on track to attempt its first launch and send an Orion spacecraft to the Moon no earlier than (NET) 8:33 am EDT (12:33 UTC) on Monday, August 29th.

Jim Free, Associate Administrator of NASA’s Exploration Systems Development division, reported that the SLS Artemis I FRR was completed with no exceptions, no additional actions required, and no dissenting opinions about the rocket’s readiness. Given just how rocky all aspects of SLS development have been, an almost perfectly clean review was not exactly expected, but it bodes well for a launch attempt during the first available window. Some work still needs to be completed, however, including at least one test that could not be completed during past test campaigns.

The rocket and pad’s behavior during two recent wet dress rehearsal (WDR) test campaigns in April and June also suggest that it could take NASA a few tries before SLS actually lifts off. There’s also a nonzero chance that minor to moderate problems could arise before liftoff, potentially requiring NASA to roll the rocket back to the VAB for a third time for repairs or longer-term troubleshooting. Thankfully, NASA officials were unusually candid in a post-FRR press conference and acknowledged many of those realities, noting that the first SLS launch could require multiple attempts.

Free even issued a statement on Twitter that almost directly acknowledged the possibility that Artemis I could end badly. While he avoided actually stating as much, the assistant administrator noted that “things may not go to plan” over the course of the mission. SLS will be the first rocket in history to attempt to send a payload to the Moon on its launch debut. Prior to attempting to enter orbit around the Moon and safely return to Earth, the Orion capsule will have only completed one suborbital test flight, and its propellant and propulsion section (service module) will have never flown.

With any luck, the rocket will make it through preflight operations without a major hitch and launch on the first try on August 29th. If not, NASA has backup opportunities on September 2nd and 5th. If all goes to plan, Artemis I will last approximately 42 days from liftoff to Orion capsule splashdown. The SLS rocket’s job will be complete around three hours after liftoff, leaving Orion to enter orbit around the Moon and eventually return to Earth.

Strangely, NASA is sending Orion to a lunar orbit different than the one the spacecraft will regularly visit with astronauts on operational missions, which are scheduled to begin with Artemis III as early as 2025. The Artemis I spacecraft also lacks a docking port and life support systems, and SLS will launch with an inert launch abort system (LAS), further weakening the test flight’s overall relevance for crewed missions.

No matter the outcome, NASA is poised to gather a massive amount of data about the performance of SLS and Orion over the course of Artemis I. In a best-case scenario, only minor tweaks will be required and Artemis II – a less complex crewed test flight including a free-return trip around the Moon – will remain on track to launch sometime in 2024.