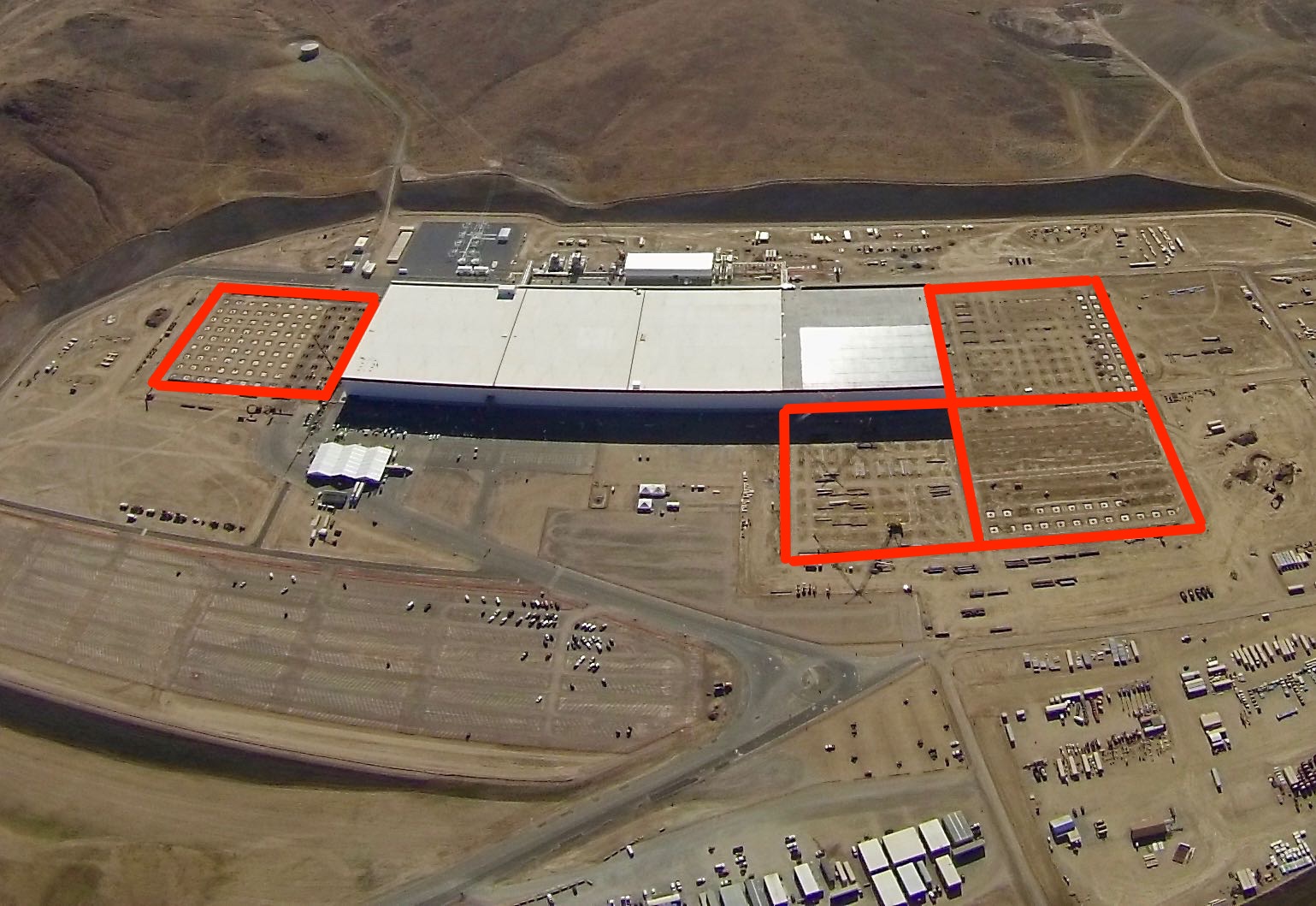 When local flight instructor Josh Mcdonald flew over Tesla Gigafactory 1 yesterday he sighted what appeared to be preparations for its upcoming grand opening party. An enormous party tent was spotted being perched outside of the battery plant. But beyond that, he also noted new footings and foundations adjoining the north and south end of the Gigafactory were being constructed. We’ve outlined these sections in red showing four new sections appearing to have the same if not larger combined footprint equal to the size of the existing Gigafactory.

The four sections seems to encompass approximately 1.9 million square feet of floor space – the size of the existing Gigafactory – representing less than one-sixth the size of the overall factory when completed. According to a report on the Wall Street Journal, the size of the construction crew has more than doubled recently and work is proceeding in double shifts, 7 days a week.

Tesla wants the factory operational before the launch of the Model 3. Production for that car is now expected to begin in late 2017 with Panasonic being a major partner in the Gigafactory process.  “We are running around like crazy hiring people,” says a Panasonic representative. The Japanese battery company is racing to catch up, after Elon Musk announced he was moving the timeline forward to sell 500,000 cars a year two years sooner than anticipated.

“If you look at where batteries are being made, it’s almost all in Asia,” JB Straubel says. “That was one of the big opportunities we have here, is to close the logistics loop from where cells are made and materials are made and move it closer to where our vehicles are made.”

Sam Jaffe, a principal with Cairn Energy Research Advisors, is skeptical that the reductions in battery costs that Tesla anticipates from building the Gigafactory will happen right away. “What they won’t be able to do from a battery manufacturing perspective is make the cells as cheaply as they hoped. A lot of the price reductions from the Gigafactory model come from the supply chain re-creation that they will be doing in North America. That won’t be ready by 2018.”

One thing often overlooked about Tesla is that it is a US-based company making cars in the US with US workers. It doesn’t get enough credit for its job creation prowess here at home.

Tesla will be holding a Grand Opening party this Friday July 29 at the Gigafactory. Aerial photos reveal a newly painted parking lot large enough to accommodate 2,000 vehicles and possibly a test track around the perimeter of the facility.