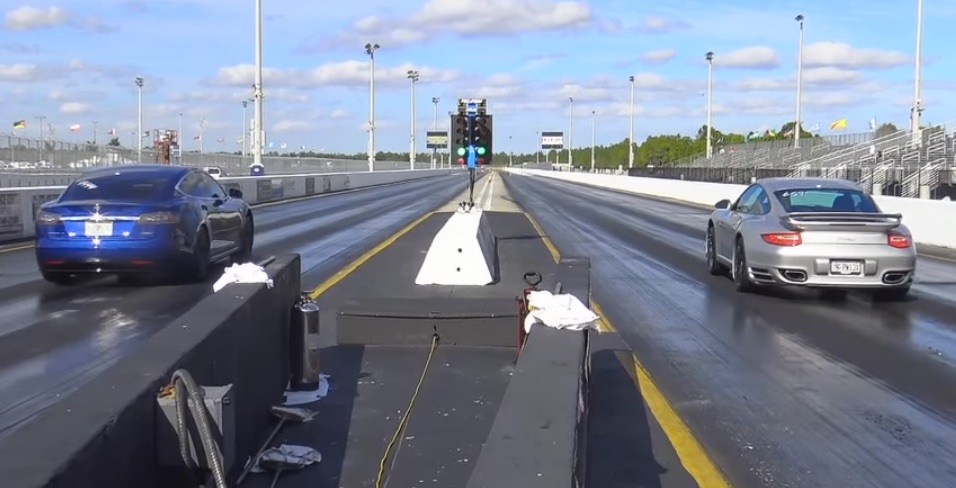 A rematch between Tesla’s flagship Model S P100D and a Porsche 911 Turbo S went down at the Palm Beach International Raceway. The previous 1/4 mile battle between the two heavy-hitting 600+ horsepower machines ended with the tuned Porsche edging out the dual motor P100D by a few car lengths. However, a slow start by the Model S driver led viewers wondering what the results could have been had both vehicles started at the same time.

The results of the rematch – Ludicrous Tesla Model S P100D vs. Porsche Turbo S – prove that the iconic Nürburgring veteran can still reign king at the track, even if it’s a drag strip. To be fair, the 2011 Porsche Turbo S seen in the video has been modified with larger turbo intercoolers, an upgraded air intake and exhaust system, as well as a GIAC tuned ECU. The performance bump is said to be in the range of 600 horsepower with 600 ft/lbs of torque.

Meanwhile the Model S P100D sedan, emphasis on sedan, is powered by a pair of electric motors (259 HP front, 503 HP rear) and currently the quickest volume production car in the world. An upcoming Easter Egg, revealed by Tesla CEO Elon Musk, will make the P100D even quicker.