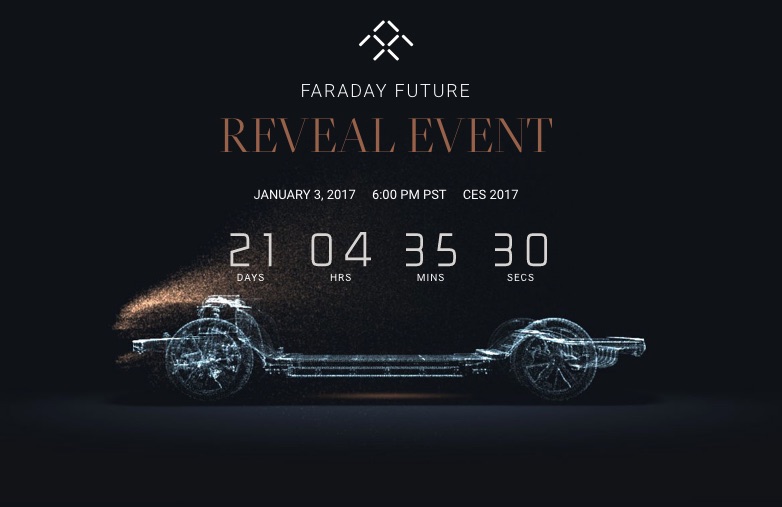 Faraday Future announced that it will live stream the unveiling of its much-talked-about first production car on January 3, 2017 at 6pm PST. The company revealed a newly redesigned website which prominently displays a countdown clock to the unveiling scheduled to take place at CES 2017 in Las Vegas, NV.

The website uses what the company calls particle imagery — a series of points that are combined by computers to represent how the car’s advanced LiDAR scanning and mapping systems view the physical world surrounding the vehicle. The website makes no specific reference to radar. It is well known that Elon Musk is cool to the idea of using LiDAR sensors because of their inability to “see” through fog, rain, snow, and mist.

Between now and the the actual reveal, the website image will add more graphic points to flesh out what the car will look like in silhouette. For the moment, the chassis of the car is viewable to show what the car’s platform looks like.

Anyone interested in information about reserving a Faraday Future automobile may use the Create Account link at the bottom of the home page. Those who create an account will be notified immediately when more information about how to reserve a car comes available. According to a press release from the company, “Both the desktop and mobile sites were developed to share exact functionality and parity between the two. As a mobility company, this parity speaks to FF’s mission to create universal interactivity in the digital space.”

Digging a little deeper into the Faraday Future website, the company says it is “planning to launch a brand new, state-of-the-art automotive production plant” in North Las Vegas “in the very near future.” People familiar with company know that work on that factory has been suspended, reportedly because Faraday Future has run out of money. In fact, Dan Schwartz, treasurer of the state of Nevada, has said publicly that Jia Yueting, the principal financial backer of the company, “[is] out of money. Could he get more money? My sources in China say the government there isn’t financing him. I wonder where and how they’re going to continue this project.”

Last week, Faraday Future renewed its contract with the city of Vallejo, California to explore the feasibility of building a second, smaller factory on North Mare Island in San Francisco Bay. Taking a page from Tesla Motors, Faraday Future is also using videos posted to YouTube to build interest in itself. The most recent video shows the company’s crossover SUV lining up against a Ludicrous Tesla Model X P100D in a drag race. Although the Faraday car is draped in camouflage, it appears to have a shape similar to a crossover or sport utility vehicle. The fact that it is pitted against a Model X contributes to the impression that the Faraday will be an SUV  type vehicle.