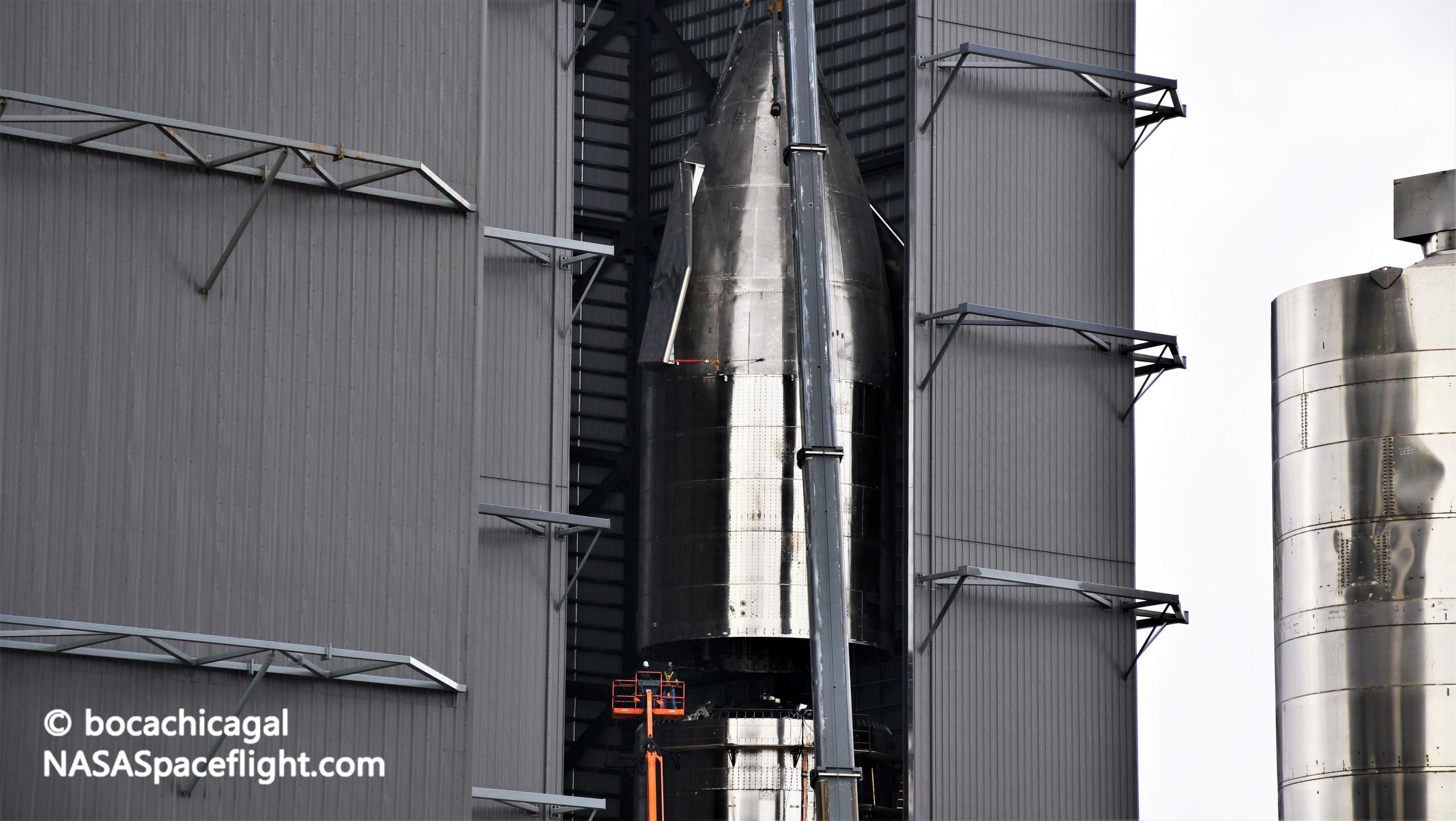 SpaceX has installed another Starship’s nosecone, all but completing the second full-size prototype a matter of days before the first fully-assembled Starship’s risky launch debut.

Over the last two months, SpaceX has effectively put Starship number 8 (SN8) through an almost nonstop series of tests, completing at least four separate cryogenic proof tests, four Raptor engine static fires, and much more. The company’s South Texas team have also dodged an array of technical bugs; installed, plumbed, and wired what amounts to ~40% of Starship (the nose section) while fully exposed to the coastal elements; and even narrowly avoided a potentially catastrophic failure.

In spite of the many hurdles thrown up and delays resultant, CEO Elon Musk announced earlier this week that Starship SN8 is scheduled to attempt its 15-kilometer (~50,000 ft) launch debut as early as Monday, November 30th. Musk, however, does not see success as the most probable outcome.

Why, then, push to launch Starship SN8 when, in Musk’s own words, the probability of success is as low as “33%”? As previously discussed many times in the history of Teslarati’s BFR and Starship coverage, SpaceX’s attitude towards technology development is (unfortunately) relatively unique in the aerospace industry. While once a backbone of major parts of NASA’s Apollo Program moonshot, modern aerospace companies simply do not take risks, instead choosing a systems engineering methodology and waterfall-style development approach, attempting to understand and design out every single problem to ensure success on the first try.

The result: extremely predictable, conservative solutions that take huge sums of money and time to field but yield excellent reliability and all but guarantee moderate success. SpaceX, on the other hand, borrows from early US and German rocket groups and, more recently, software companies to end up with a development approach that prioritizes efficiency, speed, and extensive testing, forever pushing the envelope and thus continually improving whatever is built.

In the early stages of any program, the results of that approach can look extremely unusual and rudimentary without context (i.e. Starhopper, above), but building and testing a minimum viable product or prototype is a very intentional foundation. Particularly at the start, those minimal prototypes are extremely cheap and almost singularly focused on narrowing a vast range of design options to something more palatable. As those prototypes rapidly teach their builders what the right and wrong questions and design decisions are, more focused and refined prototypes are simultaneously built and tested.

Done well, the agile approach is often quite similar to evolution, where prototype failures inform necessary design changes and killing off dead-end strategies, designs, and assumptions before they can be built upon. In many cases, compared to cautious waterfall-style development, it will even produce results that are both better, cheaper, and faster to realize. SpaceX’s Starship program is perhaps the most visible example in history, made all the more interesting and controversial by the fact that it’s still somewhere in between its early, chaotic development phase and a clear path to a viable product.

On the build side of things, SpaceX has created a truly incredible ad hoc factory from next to nothing, succeeding to the point that the company is now arguably testing and pushing the envelope too slowly. As of November 2020, no fewer than eight full-size Starships and the first Super Heavy booster prototype are visibly under construction. Most recently, Starship SN9 was stacked to its full height, kicking off nosecone installation while still at the build site (unlike SN8). SN10’s completed tank section is likely ready to begin flap installation within the next few days, while Starship SN11 is perhaps a week or two behind that. Additionally, large tank sections of Starships SN12, SN13, SN14, SN15, and (most likely) SN16 are already completed and have all been spotted in the last few weeks.

Some ~90% of the above work was likely started after Starship SN8 first left the factory and rolled to the launch pad on September 26th. In many regards, SN8 has been the first to reach multiple major milestones, largely explaining the relatively plodding pace of its test program compared to SN4, SN5, and SN6.

Ultimately, SN9’s imminent completion – effectively a superior, more refined copy of SN8 – means that Starship SN8’s utility to SpaceX is rapidly deteriorating. The company would almost assuredly never skip an opportunity to learn, meaning that there’s no plausible future in which SN8 testing doesn’t continue, but that doesn’t mean that SpaceX can’t turn its risk tolerance to 11. In essence, accept a 67% (or higher) chance of Starship SN8’s violent destruction but learn as much as possible in the process. As long as good data is gathered, SN8’s launch debut will be a success for Starship whether the rocket lands in one or several pieces.