Hours after SpaceX CEO Elon Musk revealed the first photos of tooling for the manufacture of BFR, Teslarati photographer Pauline Acalin sped down to Port of San Pedro to survey a large dockside tent the company was constructing as of December 2017. Now complete, the temporary facility appears to be exploding with SpaceX activity as the company surges ahead with plans to assemble the first Mars rocket and spaceship prototypes – rocket-powered hops could begin as soon as early next year, with orbital launches following about a year after that.

@SpaceX showing off the main body tool for the BFR ???https://t.co/IvvN7z9kx5 pic.twitter.com/GqXssPJhqG

Per a number of related discoveries, the tooling pictured in Musk’s teaser is almost certainly located in the same tent pictured above. Of particular note, a source involved in the work has confirmed that SpaceX is using a new supplier for the custom tooling needed to manufacture BFR. The source’s comments were confirmed to be accurate minutes later in photos taken by Teslarati’s senior SpaceX stalker that peg Ascent Aerospace Coast Composites as the tooling manufacturer. As if to dispatch any lingering doubt, Ascent Aerospace appears to have also independently confirmed its involvement through a rare post on social media.

Based on Pauline Acalin’s photos of the previously unexplored SpaceX facility, the company has since filled the tent with a huge amount of hardware, and still more BFR tooling appears to be momentarily stored outside, brandishing the Ascent Aerospace name and logo. These additional components will likely be used in the manufacture of the less cylindrical segments of SpaceX’s Mars spaceship, among other possible uses. In essence, SpaceX will need to build monolithic carbon composite structures that can readily survive extreme temperatures, pressure differentials, supercool rocket propellant, significant G-loading, and much more. To a much lesser extent, this type of aerospace construction is already done on a large scale – Boeing’s 787 Dreamliner uses a significant amount of carbon composite in its fuselage and is around 6 meters in diameter to BFR/BFS’ 9m. As a beneficial consequence of such significant commercial interest in massive carbon composite structures, markets have grown to support the existence of a thriving niche of composite innovation and tooling production, maturing the technology and making the task far easier for SpaceX compared to developing tooling and processes from a blank sheet. 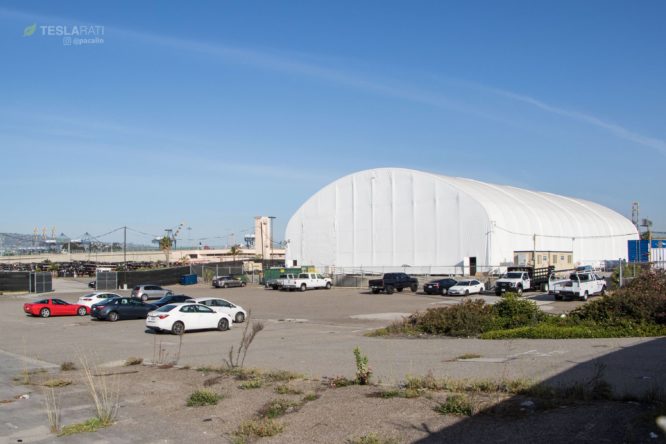 SpaceX appears to be hard at work at a temporary tent believed to house initial BFR manufacturing facilities. (Pauline Acalin) 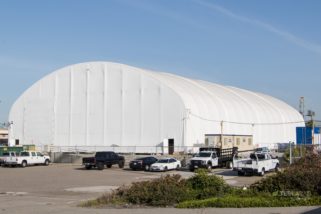 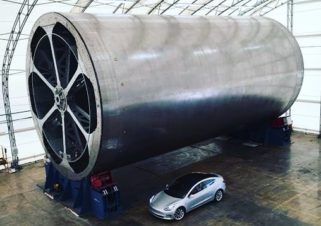 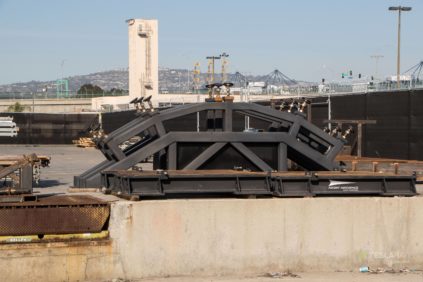 It’s understood that SpaceX will eventually move this work to Berth 240 once more permanent facilities are constructed. (Pauline Acalin) 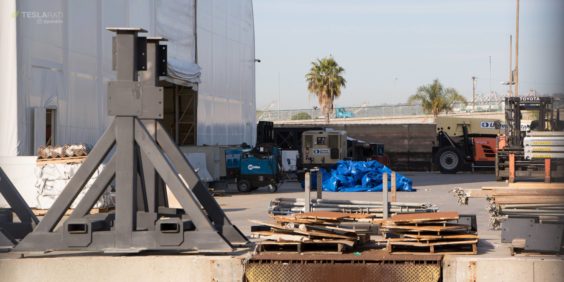 Given the surprising level of activity at this BFR-focused facility, it is fair to conclude that SpaceX is wasting no time at all with the production of its first full-scale BFR prototypes. Altogether, the tent factory is gradually being filled to the brim with custom carbon composite tooling capable of fabricating Mars spaceship and booster structures, propellant tanks, delta winglets, and more. It’s no coincidence that this tent (and the prospective factory at Berth 240) were both located at Port of San Pedro – once completed, it should be comparatively easy to ship the massive components to SpaceX’s Texas or Florida facilities, both of which have been hinted as possible locations for BFR testing (and launches, eventually).