Just shy of two weeks ago, SpaceX announced the discovery of unspecified problems with a Falcon 9 payload fairing during routine quality assurance (QA) testing at the company’s Hawthorne, CA factory. The launch of Zuma, a deeply mysterious satellite with no clear manufacturer or customer, was subsequently delayed indefinitely, pending the results of an internal investigation into the aforementioned fairing defects.

Several days after SpaceX’s Zuma announcement, the Falcon 9 booster, second stage, and payload (often referred to as the “stack”) were rolled back into the pad facilities at LC-39A, verifying that a delay of at least several days would follow. This delay was both confirmed and denied in a confusing manner, with the Cape’s 45th Space Wing appearing to suggest that Zuma would not be impacted by a preplanned range closure in late November, although journalist Irene Klotz reported that Zuma was delayed until December, when maintenance was scheduled to end. 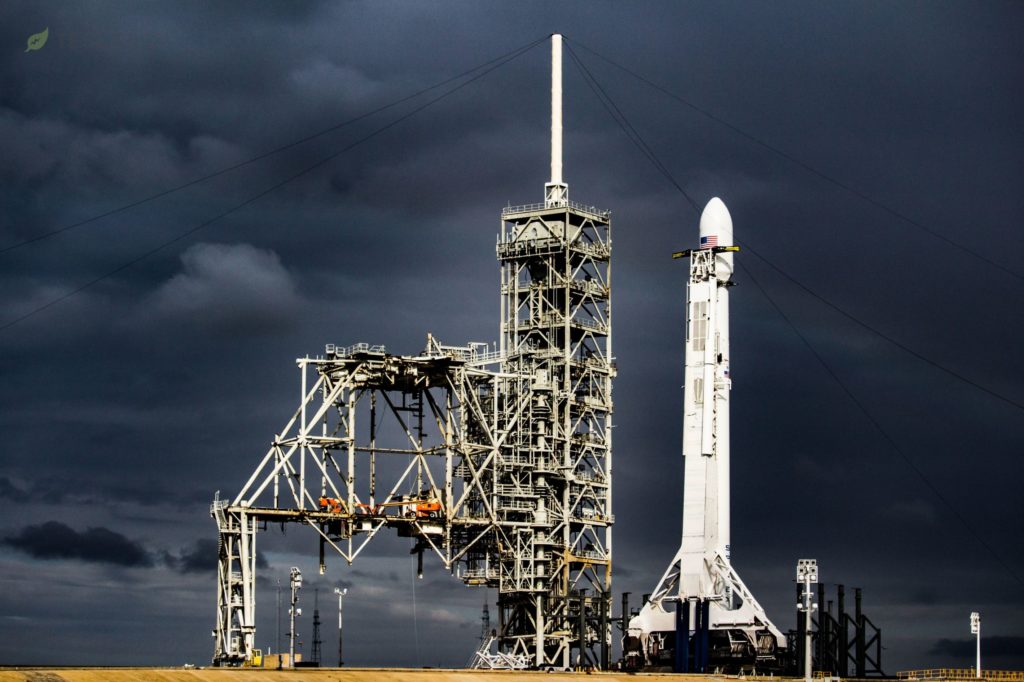 All things considered, the month of November has been an unusually chaotic period for SpaceX and the Space Coast, and the chaos has almost certainly been exacerbated by the intense secrecy surrounding Zuma. As the sum total of publicly available information, these details indicate that SpaceX employees discovered a systemic defect or defects in recently-manufactured fairings, serious enough to indefinitely ground the company’s commercial launches. However, SpaceX recently opened press registration for the Iridium-4 mission, still apparently scheduled for launch on December 22 and further corroborated by the CEO of Iridium Communications, hinting that that mission’s fairing either predates the scope of the fairing investigation, or that the investigation and fairing groundings have arisen out of an abundance of caution above all else.

A Dragon stretches its wings

More importantly and perhaps more logically, SpaceX’s next Cargo Dragon mission to the International Space Station – CRS-13 – has not been directly impacted by fairing problems; Dragon missions do not require fairings. The CRS-13 mission, currently aiming for a static fire on November 29 and launch on December 4, will be exceptional for a number of equally thrilling reasons. In no particular order: CRS-13 will mark the first NASA-approved reuse of a Falcon 9’s first stage, in this case with the added aesthetic bonus that the Dragon will reach orbit aboard the same booster that launched CRS-11’s Dragon almost exactly six months prior, June 3 2017. Equally exciting, CRS-12 marked the final new Cargo Dragon launch, and CRS-13’s Dragon is a refurbished spacecraft, having previously flown the CRS-6 mission in late 2015. 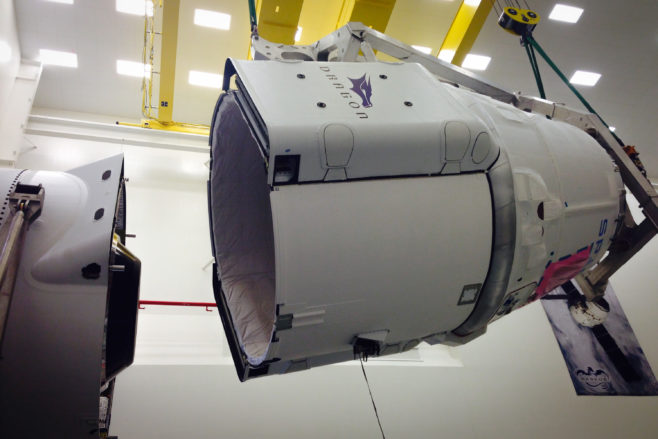 The CRS-6 Cargo Dragon being mated to its Falcon 9 launch vehicle in 2015. (SpaceX) 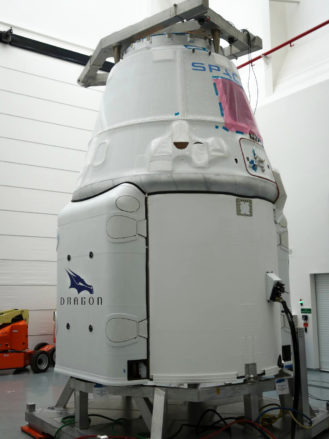 This exact Dragon has been recovered from orbit, refurbished, and is now prepped and ready for another orbital mission on December 4th. (SpaceX)

Rather poetically, CRS-11 marked the first commercial reuse of an orbital spacecraft, and the booster that launched that mission, Falcon 9 1035, will now fly once more to lift the second-ever reused Dragon into orbit. If all goes as planned, SpaceX’s CRS-13 mission will arguably be the most-reused orbital-class mission in the history of spaceflight, with only the second stage and Dragon’s trunk being both new and expendable. Both the booster and Dragon likely required a fair amount of refurbishment, but if Elon Musk’s June 2017 statements remain accurate, SpaceX has probably progressed far along the reusability learning curve. Quoting Elon Musk and myself at the ISS R&D Conference in July 2017:

Musk said he expects the next Dragon reuse and all future reuses to save the SpaceX nearly 50% of the cost of manufacturing an entirely new spacecraft. Musk admitted that the first refurbishment of Dragon likely ended up costing as much or more than a new vehicle, but this is to be expected for the first attempt to reuse any sort of space hardware that must survive some form of reentry heating and saltwater immersion.

Indeed, CRS-13 will in fact be “the next Dragon reuse” after CRS-11’s success. If the spacecraft’s refurbishment does manage save SpaceX anywhere near 50% of the cost of manufacture, the mission will be an extraordinary accomplishment, above and beyond the already intense difficulty of refurbishing and reflying a several-ton (~4000kg empty) orbital spacecraft.

Even after the reuse of both the Dragon and Falcon 9 booster, CRS-13 will lay host to yet another milestone for SpaceX as the first mission to launch from the newly repaired Launch Complex-40 (LC-40), after the pad suffered widespread damage from a Falcon 9 failure during preparations for the launch of Amos-6. Little is known on the specifics of the damage suffered, but repairs have taken no less than 14 months and at a minimum required the fabrication, assembly, and qualification of entirely new Ground Support Equipment (GSE). 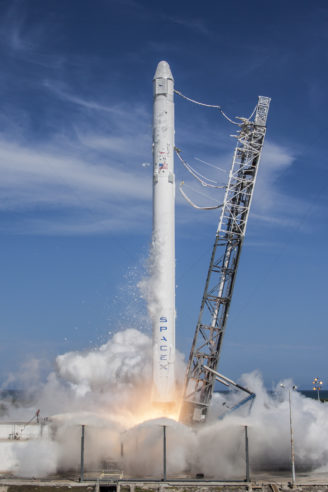 Based on photos posted to social media, LC-40’s new TEL will be considerably different than the 39A’s white monolith, likely closer in form to the original it is to replace (seen here). (SpaceX) 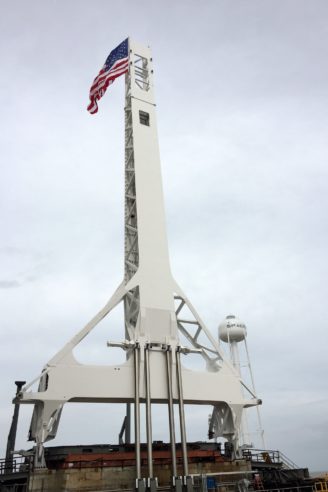 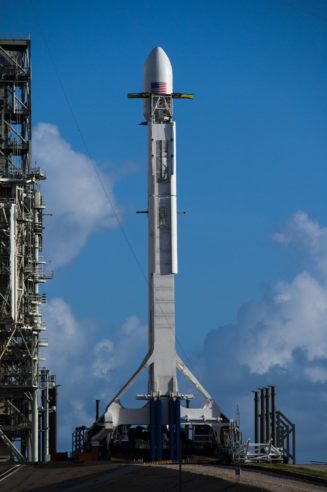 Under the umbrella of GSE are thousands of feet of precisely machined and welded piping and pumps, a new launch mount and transporter-erector-launcher (TEL) to carry Falcon 9 out of the integration facilities, the repair or complete removal and replacement of a huge volume of scalded concrete, and the repair or replacement of likely dozens or hundreds of other miscellaneous components destroyed in the intense fire that followed the Amos-6 incident. Nevertheless, as spotted on a social media platform by the author, the aforementioned TEL and launch mount were shown going vertical just a handful of days ago, further evidence that LC-40 is once again rapidly marching towards operational status.

The long-awaited reactivation and return to operations at LC-40 is itself arguably the most critical path ahead of Falcon Heavy’s inaugural launch, and modifications to the pad and TEL have restarted in light of Zuma’s indefinite delays, with SpaceX’s ever-productive and heroic ground crew taking advantage of extra down-time between launches. With Zuma now ~11 days past its scheduled launch date, the mission’s delay will likely result in additional delays to Falcon Heavy’s inaugural launch, which was reported to be aiming for ~December 29. This deep of a delay might also necessitate the transfer of Zuma’s launch from LC-39A to LC-40, depending on the customer’s flexibility and SpaceX’s own needs. Time will tell, and in the meantime, the mystery of Zuma and wondrous accomplishments of CRS-13 ought to sate the launch withdrawals of SpaceX fans for the time being.