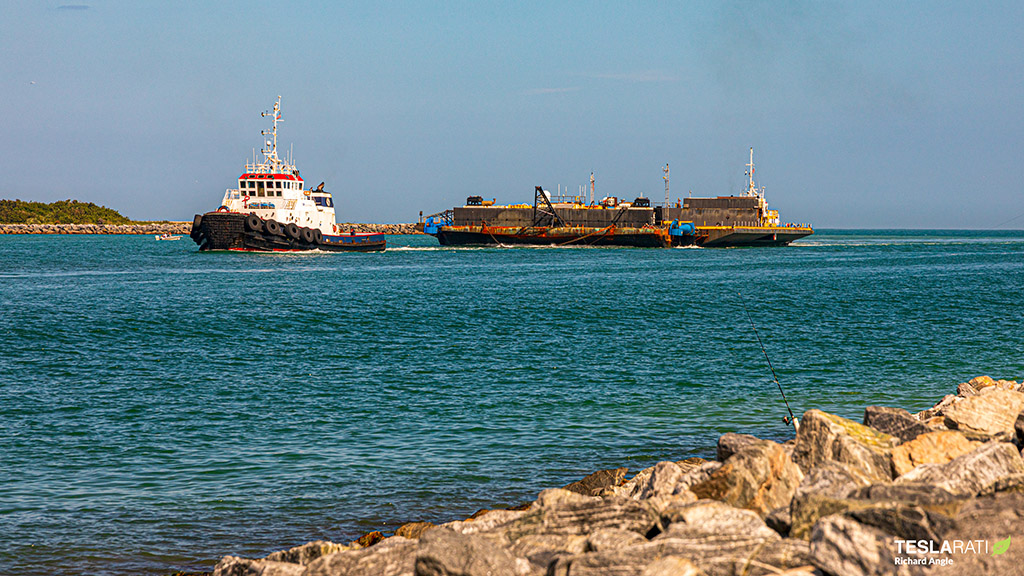 Mission objectives of the SpaceX Crew Dragon Demo-2 test flight, have already commenced days ahead of the scheduled launch attempt. On Wednesday, May 27th at 4:33 pm EDT, Elon Musk’s rocket launching – and landing – company, SpaceX, will set out to achieve more firsts than it has ever attempted in one launch. The final Crew Dragon test flight will shuttle NASA astronauts Bob Behnken and Doug Hurley to the International Space Station for the very first time. Along with the primary mission objective to deliver the astronauts safely, many secondary objectives are built into the mission profile. One of which is autonomously turning the Falcon 9 booster around shortly after launch to land on a floating barge in the middle of the Atlantic Ocean.

During the late hours of Saturday, May 23rd, a trusted veteran member of the SpaceX fleet of recovery vessels, Tug Hawk, returned to Port Canaveral to transport SpaceX’s autonomous spaceport drone ship, Of Course I Still Love You (OCISLY) to the designated booster recovery zone some 510km downrange. It seems that Tug Hawk and its crew returned specifically to assist with the recovery efforts of SpaceX’s highest-profile launch to date as there was already another tug at Port Canaveral available to assist that was not used. The arrival was captured by long-time port activity documenter, Julia Bergeron, and reported by the unofficial Twitter SpaceX recovery vessel tracking account, SpaceXFleet.

The SpaceX recovery fleet portion of the Demo-2 mission got underway on the morning of Sunday (May 24th). Space Coast local Greg Scott was at Port Canaveral to capture Tug Hawk’s departure with OCISLY in tow just twelve hours after arriving. About an hour later, the OCISLY support vessel that carries cargo and crew essential for booster recovery efforts, GO Quest, departed. It will take Tug Hawk and OCISLY approximately two days to travel to the recovery zone, arriving about 24 hours before the launch attempt.

The propulsive landing of a booster at sea is not a new concept for SpaceX. However, it is a practice that can be somewhat tricky to get right every time due to a multitude of factors. Recently, SpaceX suffered the loss of the Falcon 9 boosters B1056 and B1048 following recent Starlink satellite launches. Both boosters suffered unrelated issues with high winds and software glitches resulting in failed attempts to stick the landing on OCISLY. However, SpaceX successfully demonstrated the reliability of the Falcon 9 landing capability with the flawless launch and landing of the April 22nd Starlink Falcon 9 B1051 booster.

A special circumstance of the Demo-2 mission is the added recovery requirements of the Crew Dragon capsule. With Crew Dragon launching from LC-39A at the Kennedy Space Center in Florida and splashdown designated for the Atlantic Ocean, various recovery zones span almost the entire length of the United States’ eastern seaboard and across the Atlantic Ocean to Ireland. Special recovery zones also are located throughout the Gulf of Mexico.

Typically, the recovery of a crew capsule would only be thought to occur upon mission end when it is on approach for splashdown after re-entry. However, the specially equipped SpaceX Crew Dragon recovery vessels, GO Searcher and GO Navigator, are required to be able to respond to a number of locations during launch and through the entire duration of Crew Dragon’s time on orbit chasing down the International Space Station prior to docking – for Demo-2 that will be nineteen hours. This is to ensure that in the unlikely event of Crew Dragon experiencing an emergency pad or launch abort scenario, the crew aboard can be safely rescued.

To this end, GO Searcher departed Port Canaveral days ago destined for the Naval Air Station in Pensacola on Florida’s west coast. GO Navigator will remain at Port Canaveral until Crew Dragon returns for a splashdown following the conclusion of Demo-2. Dual Dragon recovery vessels stationed on either side of Florida ensures that Hurley and Behnken can be rescued should they require emergency recovery.

Should Demo-2 pass SpaceX’s upcoming final Launch Readiness Review scheduled for Monday, May 25th, all will proceed toward the launch attempt on Wednesday, May 27th at 4:33 pm EDT.