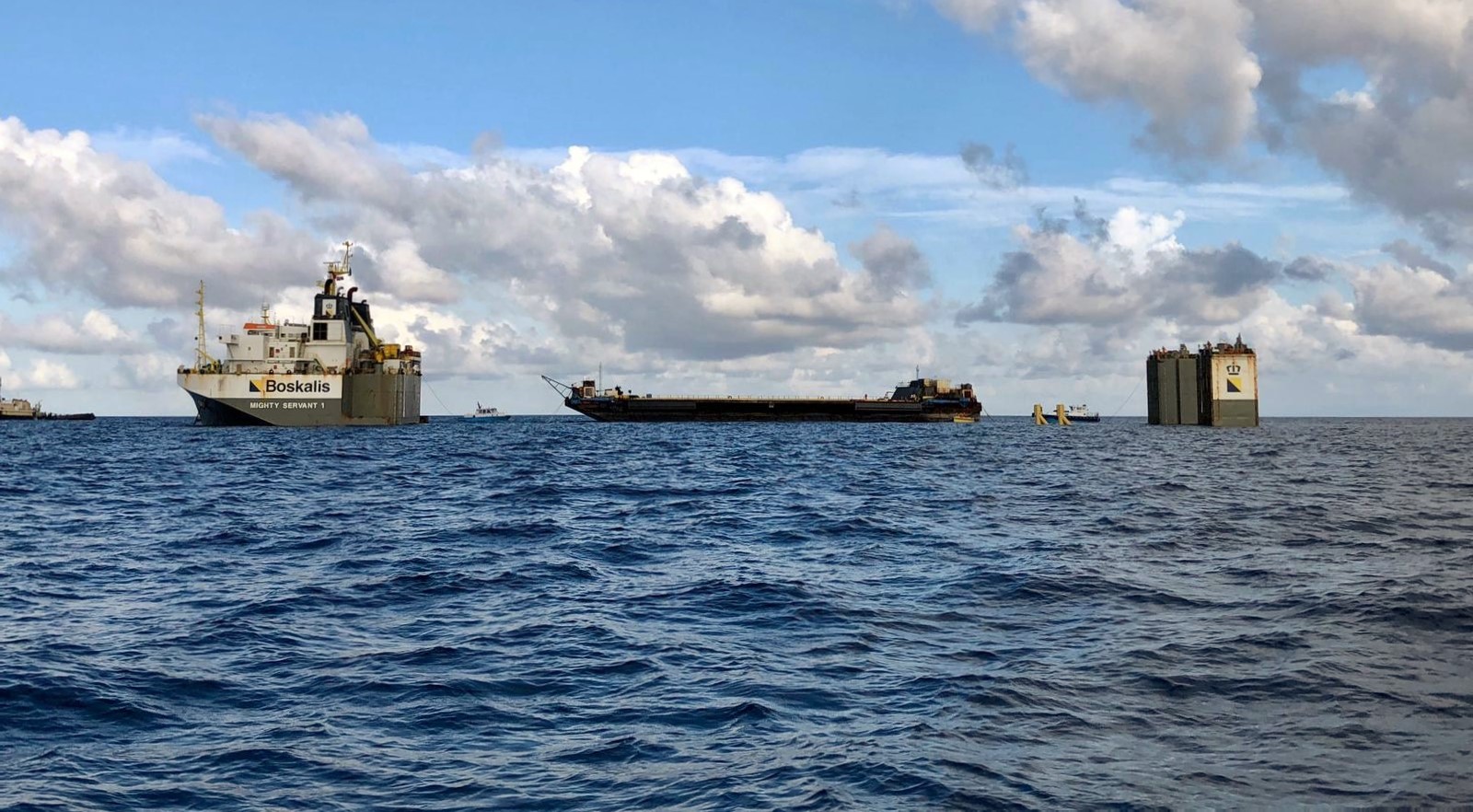 After a quick jaunt from Port Canaveral to the Bahamas, SpaceX drone ship Of Course I Still Love You (OCISLY) has been loaded onto the deck of a much larger semi-submersible transport vessel.

Known as Mighty Servant 1 (MS1), it appears that OCISLY will be carried from the Bahamas through the Panama Canal – and possibly all the way to Port of Long Beach, California – on the back of the transport ship. That’s unlike Just Read The Instructions’ (JRTI) 2019 transit from California to Florida, which saw SpaceX remove the drone ship’s deck ‘wings’ for a tow through the Panama Canal’s older, narrower locks.

Perhaps possible because of the use of a transport ship like MS1, it appears that drone ship OCISLY will instead be allowed to transit the Panama Canal’s 55-meter-wide (180 ft) New Panama locks. With a one-time permit, SpaceX can bypass its otherwise strict 51.25m (168 ft) beam (width) limit and squeeze drone ship OCISLY through the canal with just 1-1.5m (3-5 ft) to spare on either side. As a result, SpaceX won’t have to go through the relatively laborious process of cutting off and reinstalling OCISLY’s wings and recertifying the drone ship’s seaworthiness, which can easily take a month or more.

More generally, and especially so for a payload as light as OCISLY, Mighty Servant 1 should also be able to travel significant faster than the drone ship would otherwise be able to under tow. Typically, tugboats tend to tow SpaceX’s drone ships no faster than 9 mph (13 kph). MS1 could easily average 14-15 mph with OCISLY on its deck, conceivably speeding up the 5000 mile (8000 km) journey from a bit less than four weeks to two weeks.

While convenient regardless, a substantially faster canal transit and coast-to-coast journey and the freedom to leave OCISLY almost entirely unchanged will help SpaceX begin dedicated polar Starlink launches from the West Coast as early as July 2021. SpaceX COO and President Gwynne Shotwell first put forth a goal of beginning those launches in “summer” 2021 – technically no earlier than (NET) July 2021. Spaceflight Now later confirmed that dedicated polar Starlink launches were indeed scheduled to begin as early as July.

As of June 2021, SpaceX has already delivered a well-worn Falcon 9 booster from Florida to California and the last major missing piece – a drone ship to support West Coast recovery operations – may now be just a few weeks away from Port of Long Beach. In other words, while seemingly implausible just a few weeks ago, SpaceX now has a very decent chance of launching its first dedicated batch of polar Starlink satellites within the next ~7 weeks. Stay tuned for updates on drone ship OCISLY’s Panama Canal transit aboard Mighty Servant 1.