SpaceX’s Falcon 9 fairing catcher ship Mr Steven has had all four new arms removed as the company’s recovery engineers and technicians continue to iterate on his fairing recovery mechanism and operational strategy.

The purpose of this round of arm removal is unknown, but the work going on at Berth 240 is nevertheless a fascinating glimpse into SpaceX’s preferred mode of operations, mainly focusing on constant improvement, tireless iteration, and minimized bureaucratic burden.

Originally spotted testing the behavior of a Falcon 9 fairing half in Mr Steven’s new net around August 13th, West Coast recovery technicians had completely removed all four of the vessel’s large arms and all eight of his arm booms just one week later, leaving the boat armless for the first time in roughly two months.

The speed of that seemingly significant hardware removal alone is rather interesting, suggesting that routine removal of Mr Steven’s arms could be wholeheartedly feasible for short-term requirements, be it a clearance issue for traversing canals or perhaps even some sort of modular recovery setup that could optimize Mr Steven for catching Falcon fairings, Dragons, and perhaps even Falcon upper stages. 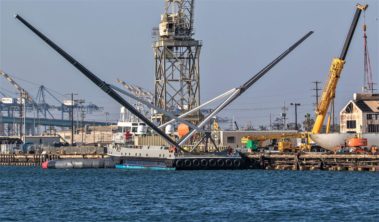 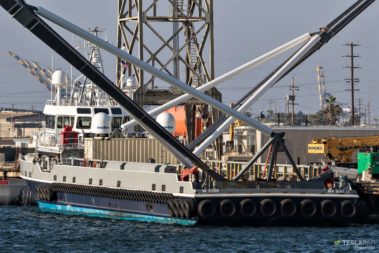 Wild speculation aside, it can be said with certainty that the ability to remove Mr Steven’s arms so rapidly will make the lives and work of the technicians and engineers tasked with maintaining, testing, and improving the vessel’s recovery mechanisms considerably easier, demanding just a few days of work for complete disassembly. SpaceX CEO Elon Musk did note around the time of the upgraded arm and net installation that those new arms would be retractable and “springy, like a highly damped trampoline.”

The inclusion of large white damping booms to support that supposed springiness was indeed visually confirmed while SpaceX was testing the vessel’s net with a real Falcon 9 fairing, but it’s quite clear that no retraction mechanism was included on the first iteration of Mr Steven’s upgraded arms. Chances are good that this full-up arm removal is related in some way to Musk’s retraction reference, perhaps triggered by observations made during that aforementioned testing with a real fairing half, just days after which arm removal had already been half-completed.

Mr Steven’s next shot at catching a Falcon 9 fairing will follow the launch of Argentinian Earth-sensing satellite SAOCOM-1A, to be followed up soon after with the SpaceX launch of SAOCOM-1B. 1A is currently targeting late September or early October for its journey to orbit.