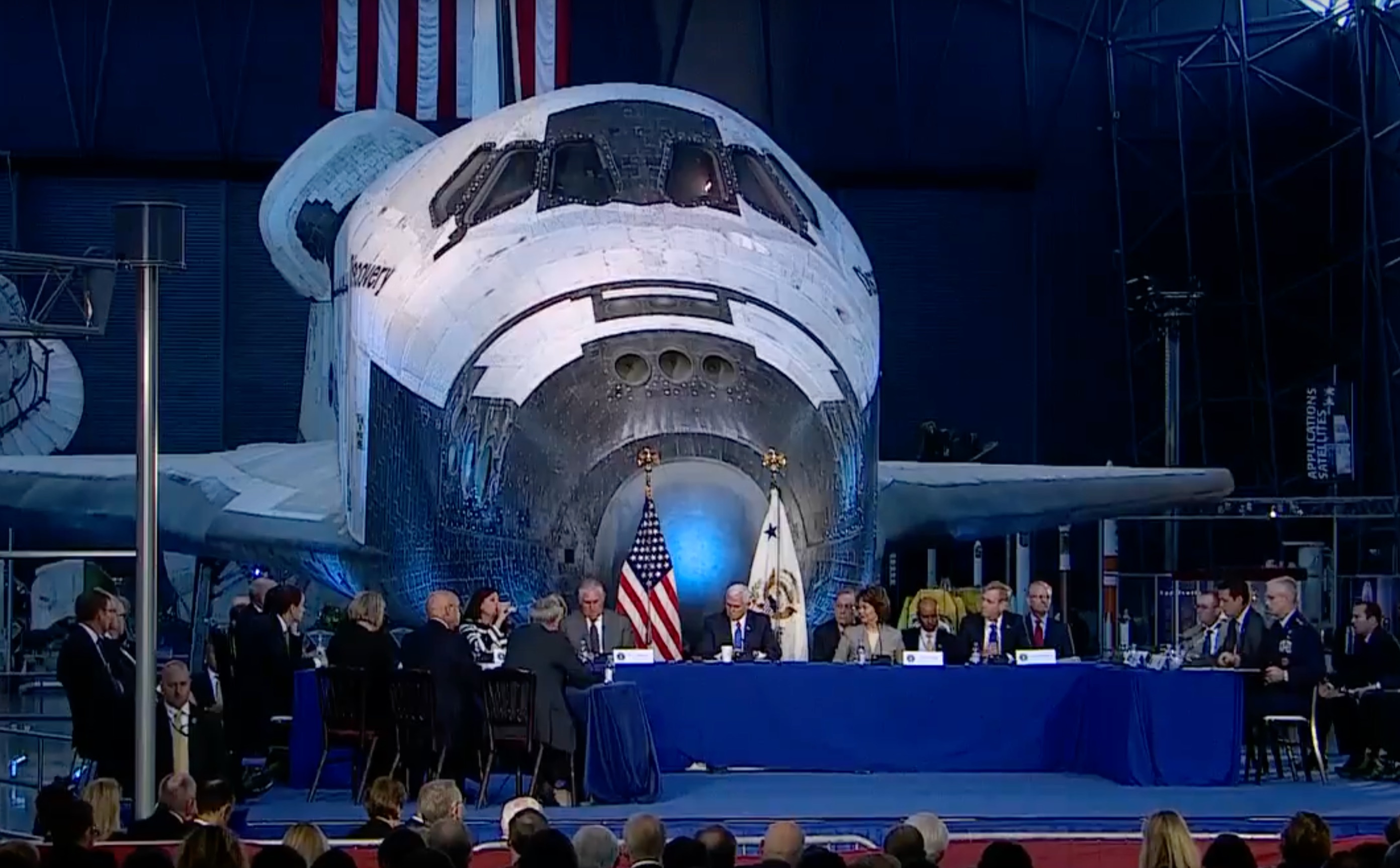 Earlier this year, the White House announced plans to reestablish the National Space Council (NSC), an advising body that dates back to the creation of NASA in 1958. The council convened for the first time on October 5 and invited several central figures in US spaceflight, including SpaceX’s President and COO Gwynne Shotwell.

In a brief but powerful speech to the Council, Shotwell urged the US Federal government to apply the lessons learned from NASA’s successful private-public partnerships to efforts to expand human presence in Low Earth Orbit and beyond. Those successful partnerships include NASA COTS (Commercial Orbital Transportation Services), which funded SpaceX to develop its Cargo Dragon spacecraft to resupply the ISS, and the Commercial Crew Program (CCP) that funded SpaceX for the development of their crewed Dragon 2 spacecraft. In terms of efficiency and speed, both programs have indeed been extraordinarily successful, despite often maligned delays.

As a brief example of the insignificance of SpaceX’s Commercial Crew delays, one needs to look no further than NASA’s Space Launch System. Described in early 2011 to be pursuing operational readiness no later than December 2016, SLS is now extremely unlikely to conduct its first launch until well into 2020. A reasonable cost estimate spreads the development costs ($30 billion) over 30 years of operations, assumes an optimistic one launch per year for the vehicle, and arrives at an astounding final figure of $5 billion per SLS launch.

The development funds NASA awarded SpaceX for both Cargo Dragon, Falcon 9, and Crew Dragon were estimated to be no more than $7.3 billion from 2006 to the last Cargo Dragon mission currently scheduled for 2024. Even if this figure swells to $10 billion once operational crewed flights to the ISS begin in 2018 or 2019, the entire cost of NASA’s support of SpaceX would equate to two launches of SLS total. NASA slipped a sly glimpse of Dragon 2 construction into their live coverage SpaceX’s CRS-12 launch. On the left is a Dragon 2 pressure vessel, while on the right is the vehicle’s “trunk”. (NASA)

Shotwell made sure to avoid the topic of SLS entirely, instead choosing to highlight the benefits of cost and speed public-private partnerships could provide for deep space communications and interplanetary cargo transport. This marks the second time that a ranking member of SpaceX has mentioned a possible public-private program for deep space communications, something that will inevitably need to improve as the commercial spaceflight apparatus extends its reach beyond Earth. SpaceX is currently developing satellite technology to enable a massive orbital Internet constellation around Earth, and the company is obviously interested in leveraging that R&D to strengthen Earth-Mars and Earth-Moon networks into a more robust communications backbone. Secretary of Transport Elaine Chao and Secretary of State Rex Tillerson also slipped in words of excitement and interest in SpaceX’s recently revealed concept of point to point Earth transportation with their BFR system.

This meeting of the NSC also focused heavily on the domestic and regulatory apparatus for commercial space operations. Shotwell and Blue Origin’s CEO Bob Smith both suggested that the FAA’s current rules and regulations regarding commercial spaceflight ought to be reviewed and potentially updated to better account for a future of reusable commercial launch vehicles. Shotwell subtly maligned the often-tedious process of applying for FAA launch permits, pointing to the fact that even slight changes to permits would force companies to file entirely new applications, often taking six months or longer. SpaceX, with its rapid development and deployment of reusable rockets and an ever-increasing launch cadence, is more than ever before at odds with the FAA’s slow and unforgiving permitting processes.

Intriguingly, Council members Mike Pence, Mick Mulvaney, and Elaine Chao all expressed a desire to ease the burden of anachronistic regulations on the commercial space industry. More interesting still, the commercial space panel ended with what effectively sounded like a handshake deal between the Vice President, the Secretary of Transportation, and the Director of the Office of Management and Budget to review current commercial spaceflight regulations and report the results of those reviews to the NSC in no more than 45 days.

It remains to be seen if this verbal commitment translates into an official review, but it is at a minimum encouraging to hear ranking members of the current White House administration so openly express support for SpaceX, Blue Origin, Sierra Nevada Corp., and American commercial spaceflight in general.

The First Meeting of the National Space Council can be seen in the embed below.