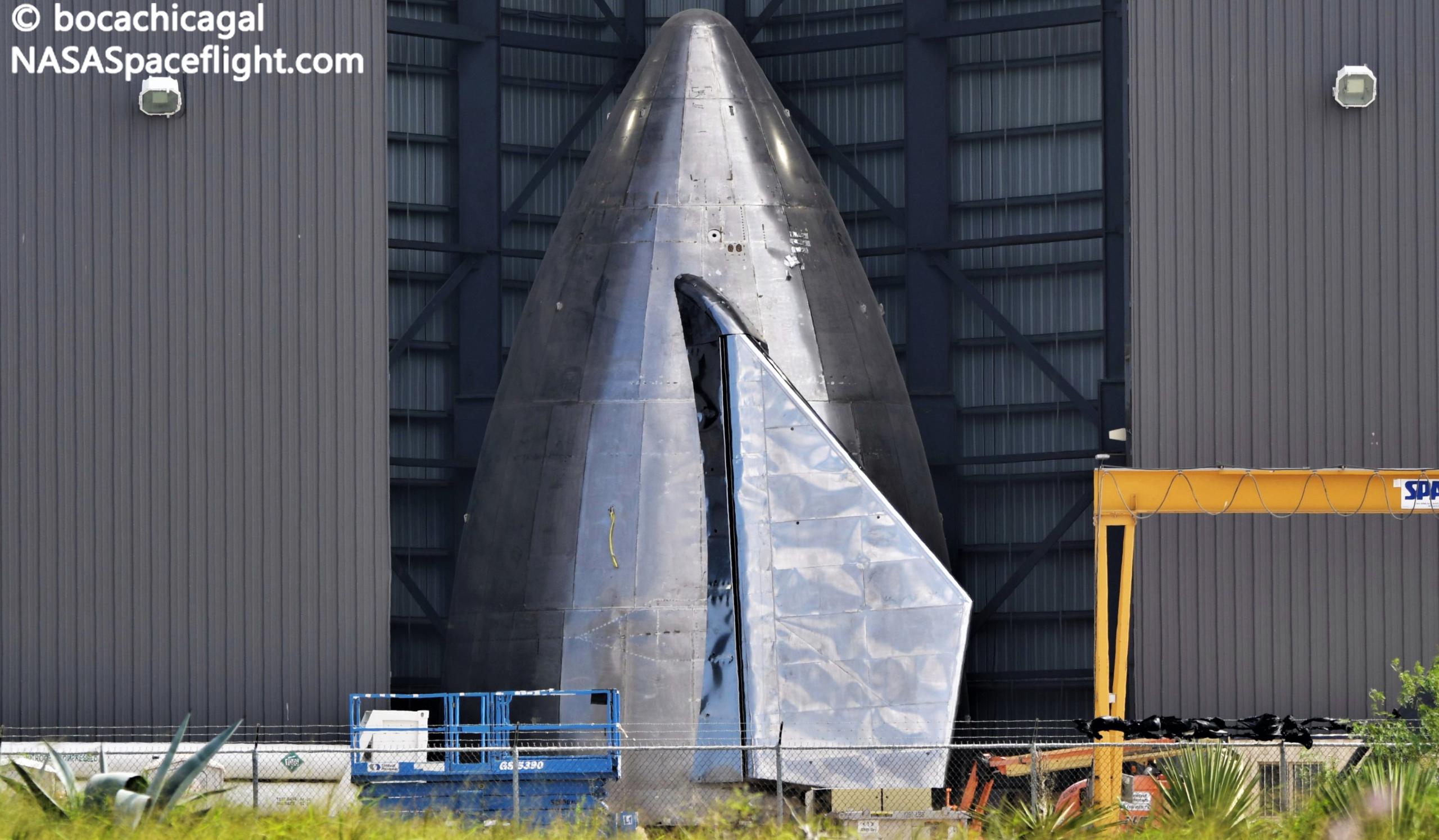 After the aerospace equivalent of a giant shell game, SpaceX has selected the Starship nosecone that will support the rocket's first high-altitude flight test. (NASASpaceflight - bocachicagal)

After a great deal of hardware shuffling, SpaceX has settled on a nosecone for its first high-altitude Starship prototype and installed a pair of forward flaps.

Effectively resulting in the aerospace equivalent of a giant shell game, SpaceX has spent the last few months building and outfitting multiple Starship nosecone prototypes, seemingly refining design and assembly with actual full-scale hardware. Within the last two or so weeks, the company scrapped at least two of those prototypes and appears to have officially sidelined one unfinished prototype.

Local resident and photographer Mary (BocaChicaGal) first spotted signs of that selection on October 12th when a prototype with aerocovers installed appeared inside SpaceX’s dedicated nosecone production tent. An inherent prelude to the installation of Starship’s mechanical control surfaces (flaps), SpaceX had outfitted the nosecone with flaps less than 24 hours later.

After flap installation, the nosecone was rolled into a nearby windbreak – a small assembly bay that’s gone largely unused since the completion of a ‘mid bay’ Starship assembly building. All signs currently suggest that the nosecone will soon be and stacked on top of a section of five steel rings in the near future. The two nose section halves will then be welded together, while any remaining plumbing and electrical work will be completed if it hasn’t already been.

SpaceX has already partially tested that process with a nose and ring section that would have otherwise been scrapped outright. Prior to moving the nose with flaps into the windbreak, SpaceX moved an older prototype – the first nose assembly to reach full height – over to Starships SN5 and SN6, fate unknown.

Barring a major anomaly during Starship SN8’s imminent triple-Raptor static fire test campaign, a first for both Starship and the engine family, the prototype will likely be the new nosecone’s recipient. Elon Musk says that SpaceX will install SN8’s nosecone only after the Starship has completed one or more static fire tests with three Raptor engines. According to a slightly older tweet, SpaceX will static fire Starship SN8, inspect the rocket, and perform another static fire before clearing it for the first 15 km (~10 mi) flight and skydiver landing test.

Starship SN8’s first triple-Raptor static fire could happen as early as tonight during a 9pm-6am test window or tomorrow between 8am and 4:30pm CDT (UTC-5).