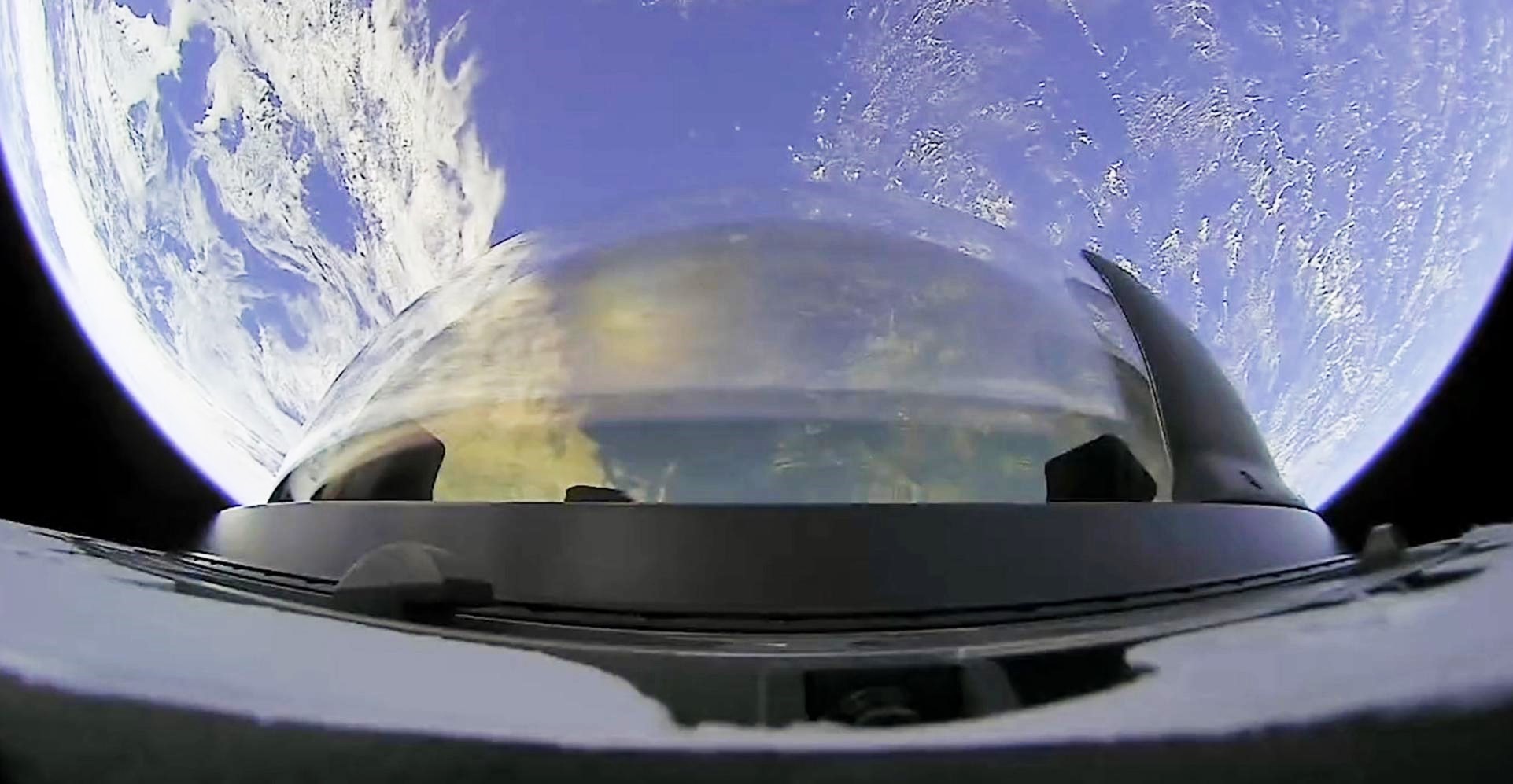 SpaceX has revealed the first on-orbit view of the largest window every launched on a rocket – and provided an update on the status of its first private astronauts – after Wednesday night’s spectacular Inspiration4 launch.

Around 8:03 pm EDT on September 15th (00:03 UTC 16 Sept), Falcon 9 successfully lifted off from Kennedy Space Center, sending four private astronauts – the world’s first all-private crew on an orbital spacecraft – into low Earth orbit (LEO). In the 18 hours since, now twice-flown Crew Dragon spacecraft Resilience has successfully boosted its orbit from around 200 km (~120 mi) to around 580-590 km (360-365 mi) – the highest altitude ever reached by private astronauts and highest any human has traveled in approximately two decades (19 or 22 years).

Now safely in orbit on what’s expected to be a three-day journey in space, SpaceX also reports that Inspiration4 commander Jared Isaacman, pilot Sian Proctor, medical officer Haley Arceneaux, and specialist Christopher Sembroski are all “healthy, happy, and resting comfortably.” As early as this afternoon, the four private astronauts will wake up and potentially experience Crew Dragon’s cupola – the largest window by surface area ever flown to space or orbit – for the first time.

Following a spectacular post-sunset launch and a nearly five-hour webcast covering it, many have noted that SpaceX and Inspiration4 have practically gone silent after reaching orbit and that unlike Crew Dragon’s past three NASA astronaut launches, there has been no live coverage – and virtually no news at all – of the in-space cruise phase. It’s quite possible that one, several, or all of the four Inspiration4 crew members – all spaceflight rookies – are experiencing the common and uncomfortable “space adaptation syndrome,” referring to extreme nausea and discomfort as many as two-thirds of astronauts experience during their first hours or even days in microgravity.

If that’s the case, it would be no surprise that the crew might want privacy for the first 12-24+ hours and more generally to simply enjoy being in orbit – and higher than all but a few dozen humans have ever traveled – with some degree of peace. A great deal of photos and videos are still expected – but as part of Netflix’s Countdown documentary and only after the crew returns to Earth, rather than the live, immediate coverage SpaceX’s other Crew Dragon missions have had.

With another two days left in orbit, the Inspiration4 crew are scheduled to perform a few relatively minor experiments – mostly focused on health – but are mostly expected to simply enjoy being in space. Once they wake up and are able to open Dragon’s forward bulkhead hatch, they’ll get to experience the first-ever views out of the spacecraft’s cupola. A camera inside the nosecone cover will allow them to take some truly unique self-portraits with Earth, space, and even the Milky Way as backdrops – only really comparable to the occasional self-portraits taken by astronauts during spacewalks.

With any luck, SpaceX or Inspiration4 will share a few of those special photos later today. Barring on-the-fly changes, the four private astronauts are scheduled to return to Earth on Saturday evening. Stay tuned for further updates on the historic mission.