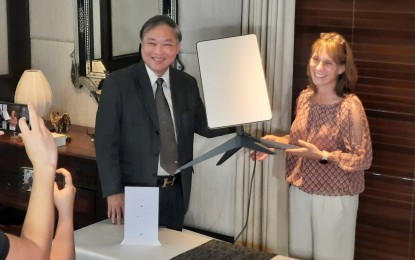 SpaceX may launch Starlink in the Philippines in December

SpaceX may launch Starlink in the Philippines in December to deliver WiFi to the underserved community. Developing Telenomics noted that the launch may happen in December.

If they do, then underserved communities could have access to high-speed and low-latency internet as early as Q1 2023

In May, we reported that SpaceX’s Starlink had been approved in the Philippines as a Value-Added Service (VAS) provider.

According to the Phillippine News Agency, there was a press event in Manila where the Department of Information and Technology (DICT) and representatives of SpaceX shared details.

At the press conference, DICT Secretary Ivan John Uy said SpaceX could deploy Starlink internet hubs as early as Q1 2021.  bringing free WiFi to citizens if the satellites are launched in December.

Rebecca Hunter, SpaceX’s government affairs senior manager, was present at the press event. Hunter explained that Starlink users will be able to tap into download speeds of 100 to 200Mbps, upload speeds of 20 to 40 Mbps, and latency of 20ms. This will greatly improve the nation’s average fixed broadband latency rate of 33ms.

DICT Will Be Kung Fu Ready For Starlink

Secretary Uy said that the DICT was hoping to be “kung fu ready.” If SpaceX is ready then the Philippines should be ready also.

He added that while the BroadBand ng Masa which is the People’s Broadband project, isn’t yet funded under the nation’s 2023 budget, the remaining budget for the previous administration’s “Free Wifi Program” will be used instead.

Hunter noted that the Starlink kit will include a satellite dish and a router and cost around PHP33,000 and PHP5,500 per month. Many households can’t afford it. Uy said that DICT through the BroadBand ng Masa project might place Starlink in community-shared spaces.

“We will provide the connectivity for them. Until such time that the local government or the Department of Social Welfare and Development (DSWD) can give feedback that we have raised them up. We’ll keep an eye and over a year or two and once they can afford it, maybe the government can then cut the umbilical cord.”

Uy also pointed out that the DICT would need to provide power and manpower to the geographically-isolated and disadvantaged areas (GIDAs) before Starlink can be used.

“With that as input, we need to provide a good budgetary proposal to Congress as to how many communities, how many barangays we are going to roll out to in the remainder of the year and in the coming year,” he said.

Starlink will need to pass one last test

Uy said that Starlink will need to pass the requirements under The Government Procurement Reform act before its services can be used as part of a government program.

“They have to go through that and see how they will be able to successfully pass that ‘obstacle course’.”

SpaceX may launch Starlink in the Philippines in December