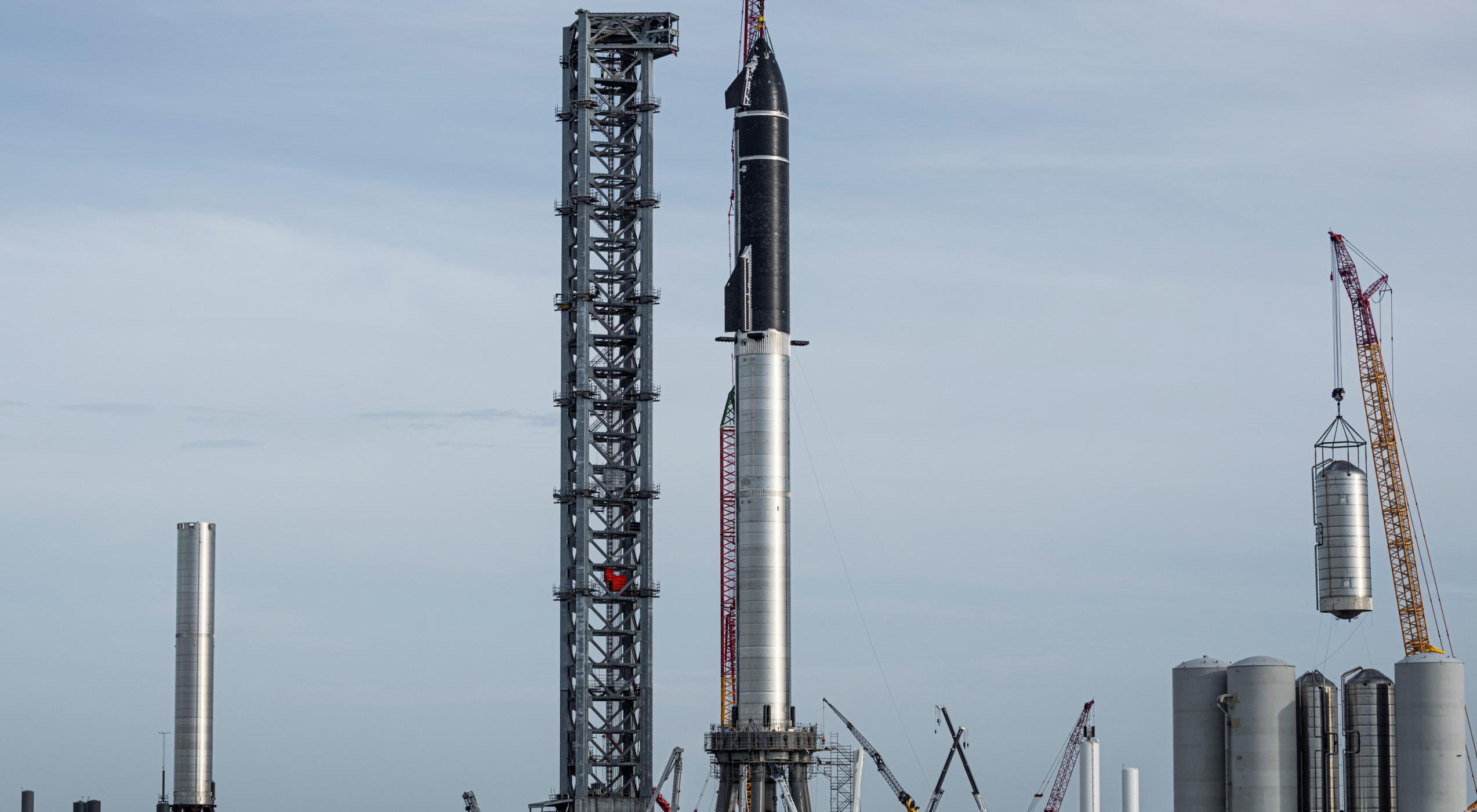 CEO Elon Musk says that SpaceX’s first completed Starship rocket could be ready for its orbital launch debut just “a few weeks” from now – far sooner than most expected.

On August 6th, SpaceX very stacked that same vehicle – Starship 20 (S20) and Super Heavy Booster 4 (B4) – to its full height for the first time ever, briefly creating the largest rocket ever assembled. However, the feat was equally a symbolic photo opportunity. SpaceX did install an unprecedented number of Raptor engines on Booster 4 and Ship 20 in a spectacularly short timeframe and both stages are technically meant for flight, but Starship S20 was demated less than an hour later and shipped back to the factory shortly thereafter.

Though they’d had Raptors installed and been stacked to their full ~120m (~390 ft) height, neither booster or ship were truly complete and at least 20% of their engines had yet to be qualified at SpaceX’s McGregor, Texas test campus. Both needed a week or two of additional work – mostly just wiring avionics and installing secondary and tertiary plumbing. Curiously, on August 13th, Starship S20 was once again rolled to SpaceX’s Boca Chica launch site in a partial state of completion, where it now sits beside the orbital launch mount for unknown reasons.

After several days of delays, SpaceX also removed Super Heavy B4 from the orbital launch mount and returned it to the build site on August 11th, where teams are still working to finish its secondary plumbing and avionics. Like Ship 20, all of its Raptors were removed soon after its return, freeing both to complete cryogenic proof testing without risking dozens of potentially flightworthy rocket engines.

Like all previous Starship prototypes, those ‘cryo proof’ tests will involved loading Ship 20 and Booster 4 with supercool liquid nitrogen (LN2), simulating the weight and extreme thermal stress of real liquid oxygen (LOx) and methane (LCH4) propellant without the risk of a catastrophic fire or explosion in the event of anomalies.

For more than a month, SpaceX also gradually outfitted one of two suborbital launch mounts with special hydraulic rams that would have simulated the thrust of Ship 20’s three sea level and three vacuum-optimized Raptor engines – the first Starship prototype with such a configuration. The same was true for Booster 4 and SpaceX had outfitted a new test jig with nine hydraulic rams labeled “B4” – clearly meant to simulate the thrust of nine engines pushing against the Super Heavy’s thrust puck. Additionally, a far larger structural test tool unofficially nicknamed the ‘can crusher’ has been more or less finished after ~6 weeks of work, leading many to assume that Booster 4 would be the first Super Heavy to be subjected to the immense simulated thrust of 29 Raptor engines.

However, earlier this week, SpaceX completely disassembled the six hydraulic rams installed on Mount B and removed all nine rams from the apparent Booster 4 jig. Starship S20 was then rolled back to spot beside the orbital launch mount – not the suborbital mount that had been carefully prepared for its test campaign mere days prior. At the time, the only practical explanation – save for some kind of catastrophic miscommunication – was that SpaceX had cancelled clear plans to cryo proof Ship 20 and Booster 4 with simulated Raptor thrust.

Up to now, every single major design change implemented on Starship’s engine section has resulted in the first prototype – and often one or several test tanks – being subjected to cryo proof testing with a complex series of hydraulic rams used to simulate thrust. That most recently peaked with SpaceX’s lone BN2.1 Super Heavy test tank, which seemingly passed a cryo proof, pressure test, and a jig capable of simulating the thrust of up to eight Raptor engines. However, SpaceX has never tested Super Heavy’s new nine-engine thrust puck and has certainly never subjected a Super Heavy booster skirt to the combined thrust of 20 outer engines and 9 center engines.

The fact that complex custom test stands and jigs had already been assembled and installed for Ship 20 and Booster 4 before they were removed or disassembled without use strongly implies that someone at SpaceX – presumably Elon Musk himself – has either decided that those tests are unnecessary or that skipping them is worth the substantial risk. Indeed, for Musk’s subsequent August 15th claim that Ship 20 and Booster 4 could be stacked and ready for flight just “a few weeks” from now to come true, 14-21 days is simply nowhere close to enough time to cryo proof, thrust sim, and static fire both vehicles; integrate the stages; and perform the first true integrate testing of a Starship stack – possibly up to and including some combination of a full-stack cryo proof, wet dress rehearsal, or static fire.

And, as Musk himself notes, that complex ballet of first-of-their-kind rocket prototypes might not even be the long straw for Starship’s orbital launch debut. Technically, short of some kind of major legal intervention, there is actually no way for Starship to launch in the next “few weeks.” In an absolute best-case scenario, the Federal Aviation Administration (FAA) would release a draft environmental review of SpaceX’s orbital Starship launch site today, accept public comments for the required 30 days, instantly clear Starbase with environmental approval within a few days of the public comment window, and then approve Starship’s South Texas orbital launch license as soon as the necessary environmental permissions are in hand.

In other words, the best-case ETA of regulatory approvals for Starship’s first orbital test flight is arguably late September and going off of FAA precedent, that optimistic scenario is also a fairy tale. In reality, a bare minimum of 2-3 months after the FAA releases its draft environmental impact statement is a more realistic best-case scenario for SpaceX. On the opposite end, it’s possible that the FAA will decide that SpaceX needs to complete an entirely new environmental review for its Starbase launch site, easily delaying Starship’s orbital launch debut by 6-12+ months. That doesn’t even account for the potential looming challenges SpaceX might have to surmount to secure an orbital Starship launch license.

Given the challenges SpaceX had in securing even a watered-down suborbital launch license for its medium-altitude Starship flight tests, it’s not out of the question that the FAA could attach some extremely onerous limitations to that license. Ultimately, only time (and the slightest hint of actual movement or urgency at the FAA) will tell and there is arguably nothing that would better apply pressure in the right places than the largest, most powerful, most ambitious rocket ever built sitting – ready for flight – at a brand new launch pad, waiting solely on regulatory approval.