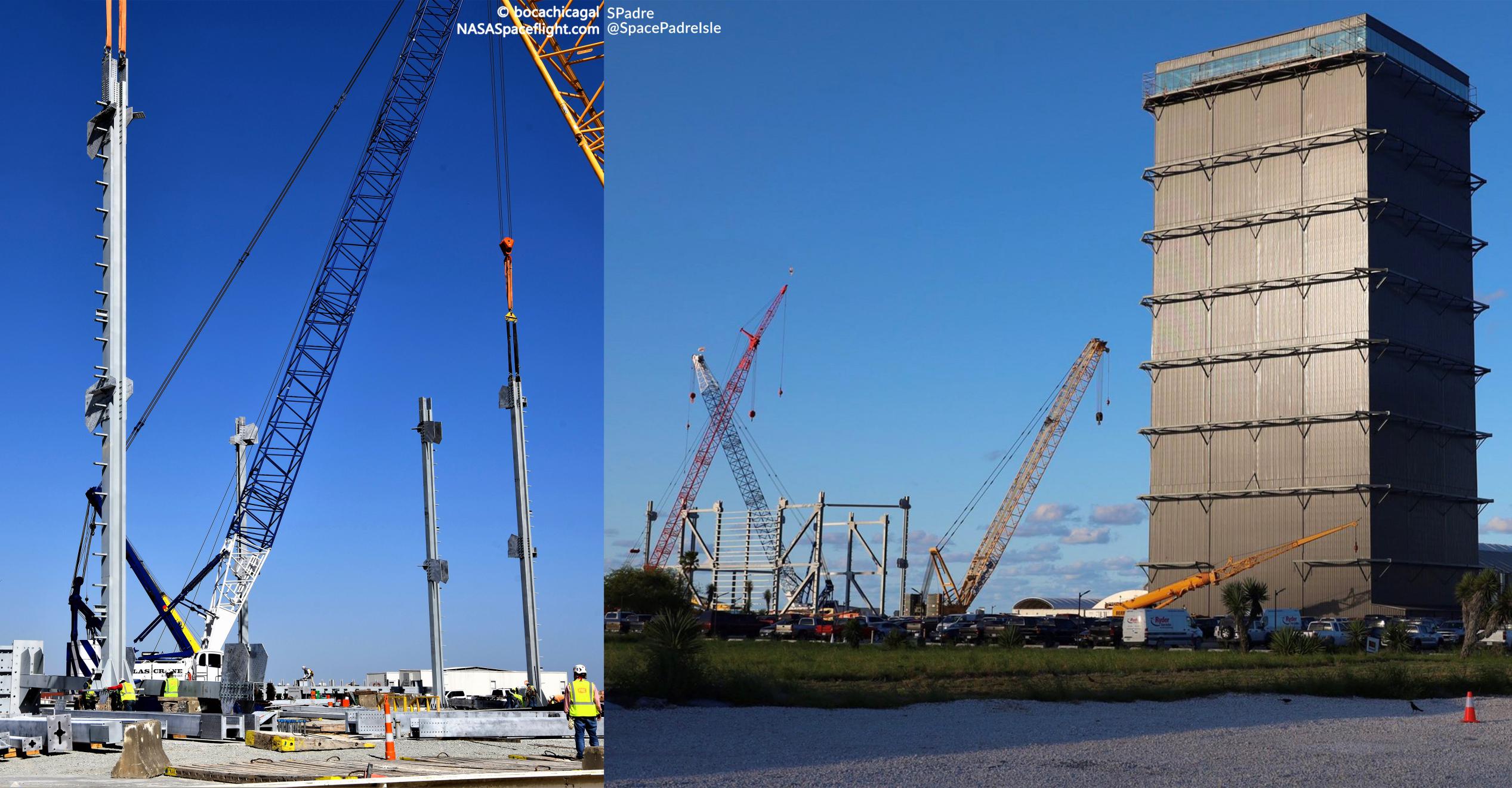 It might not look like much today but SpaceX has begun assembling what is set to become Starbase’s largest Starship manufacturing facility.

The structure, which has generally come to be known as Starbase’s ‘wide bay,’ was first teased by CEO Elon Musk in July 2021 and will be the fourth permanent assembly ‘bay’ constructed at Starbase – currently SpaceX’s sole dedicated Starship factory. The first, now known simply as the windbreak, is a triangular bay built in 2019 that is mostly unused but occasionally supports work on Starship nose assembly. Next, SpaceX built a larger ‘mid bay’ in the first quarter of 2020, out of which every Starship prototype and test tank since SN3 has been built.

A few months after the midbay was finished, SpaceX began constructing an even larger ‘high bay’ around 81 meters (265 ft) tall and 30 by 25 meters (100 by 80 ft) wide – about twice as tall and with twice the area, in other words. While the midbay was specifically optimized for assembling one or two Starship tank sections at a time, the high bay was designed to be large enough to fully assemble one Super Heavy booster (69m/225ft tall) and stack a Starship tank and nose section (50m/165ft tall) at the same time. The goal of SpaceX’s new ‘wide bay’ may be even loftier still.

Though SpaceX’s pace of Starship and Super Heavy assembly and processing appears to have slowed down significantly in the last few months, the company has still proven with Starships SN4-6, SN8-SN11, and SN15-16 that it can build large numbers of suborbital prototypes at the frankly incredible pace of 1-2 per month. With Super Heavy BN1, BN3, and BN3, SpaceX – to a lesser degree – has also demonstrated respectable booster prototype production, though none have flown and only one has completed any testing.

Nonetheless, as SpaceX works to complete Starship S21 and Super Heavy B5 and prepares to begin assembling S22 and B6 while Ship 20 and Booster 4 still sit – largely untested – at the launch site, Starbase’s existing production capabilities are already starting to outstretch its two main assembly bays. In other words, the purpose of SpaceX’s new ‘wide bay’ is almost certainly to double, triple, or even quadruple Starbase’s maximum vehicle production rate.

The wide bay’s dimensions have yet to be officially confirmed but based on aerial views of its foundation, it will measure roughly 50m (~165′) wide, 35m (~115′) deep, and 90-100m (~300-330′) tall, giving it more than twice as much usable floor space as the high bay. In theory, the high bay has enough space for SpaceX to stack 3-4 four Starship or Super Heavy tank sections at once. With more than twice the floor space, the wide bay should singlehandedly allow SpaceX to assemble 3-4 Super Heavy boosters, 4-8 Starships, or 2-3 boosters and 2-3 Starships at once.

At the absolute minimum, once fully outfitted, that means it could roughly triple the number of boosters or ships Starbase can fully assemble each month. Pictured below, there’s also a small but not insignificant amount of evidence (the small rectangles left of the wide bay foundation, bottom right, in the photo above) that SpaceX is completing additional foundation work that could double the wide bay’s floor space yet again. The second 50x35m structure those foundations seem to outline could be a wider midbay, a few-story ring assembly floor to augment Starbase’s tents, a 50x70m ‘high bay,’ or simply a more permanent space for general offices, workshops, storage, and other miscellaneous uses.

Stay tuned for updates on the massive structure’s construction.