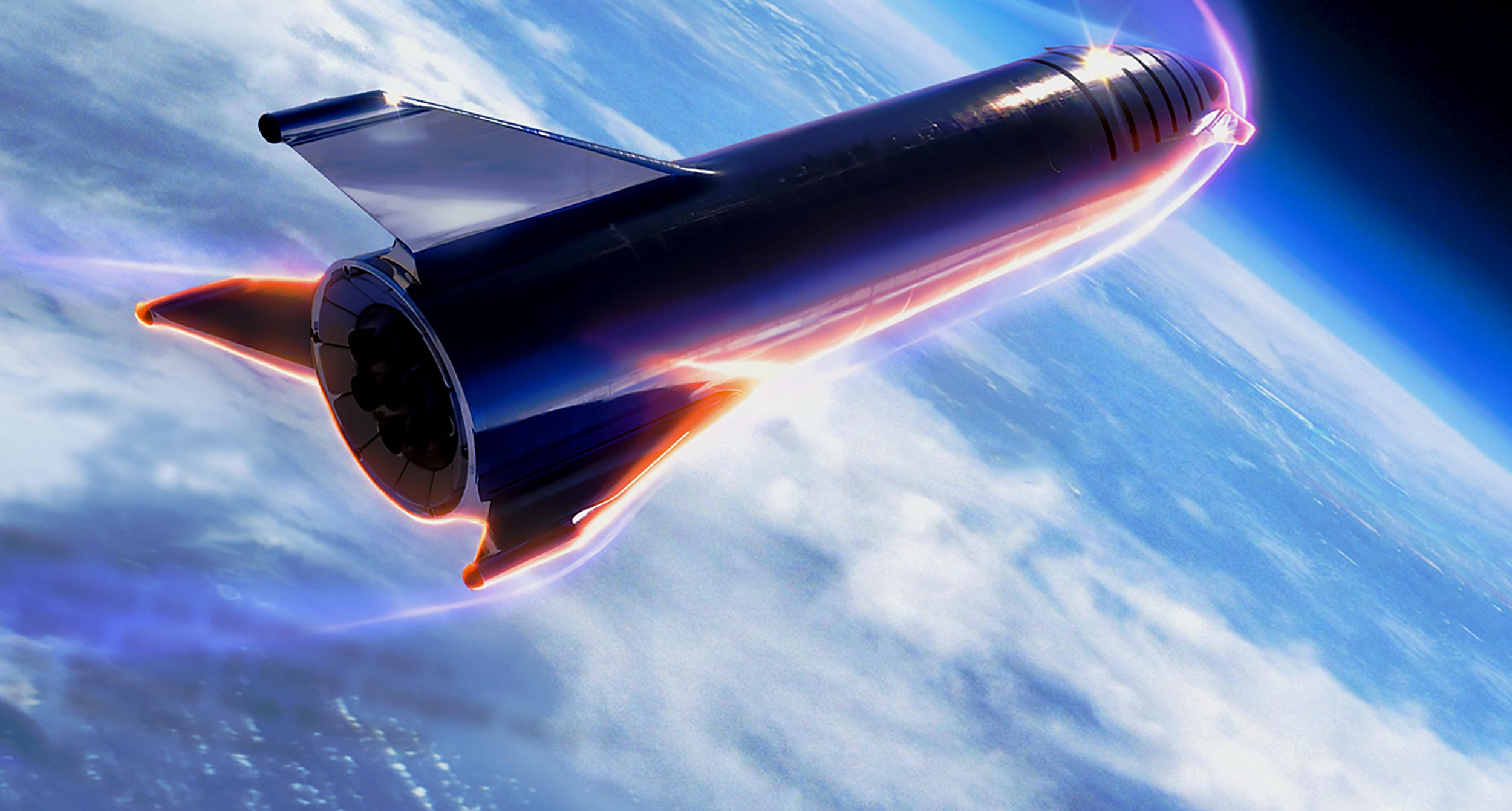 SpaceX has silently published the first known detailed render of its new stainless steel Starship’s design on the cover of Popular Mechanic’s April 2019 issue, showing the next-generation orbital spacecraft reentering Earth’s atmosphere in a blaze of glowing metal and plasma.

Despite the fact that the render seems to only be available in print and then only through one particular news outlet, Teslarati has acquired a partial-resolution copy of the image to share the latest official glimpse of SpaceX’s Starship with those who lack the means, access, or interest to purchase a magazine. Matters of accessibility aside, SpaceX’s updated render offers a spectacular view of Starship’s exotic metallic heat shield in action, superheating the atmosphere around it to form a veil of plasma around the spacecraft’s hull. According to CEO Elon Musk, the hottest parts of Starship’s skin will be reinforced with hexagonal tiles of steel and transpiration cooling, a largely unproven technology that SpaceX is already in the process of testing.

Aside from one additional view – again only distributed to Popular Mechanic – showing a far wider angle of a SpaceX Starship entering the Martian atmosphere and video shown by CEO Elon Musk to students in Flint, MI a few days ago, this appears to be the first official render of an unequivocally metallic Starship. Aside from its shiny steel exterior, this latest render also offers an exceptionally-illustrated artist’s interpretation of what a Starship with metallic thermal protection might look like during reentry, appearing to take into account a number of things that set such a system apart from traditional heat shielding.

Aside from NASA’s Space Shuttle, which used fragile tiles of insulating material in its reusable heat shield, no other spacecraft have been flown with a primary heat shields that experiences little to no ablation, meaning that the material itself is not eroded during peak heating. Ablative heat shields like the PICA-X system used on SpaceX’s Crew and Cargo Dragons produce distinctly different ‘tails’ during reentry, mainly as a result of the addition of ablated material, much like injecting different elements into a fire or using different materials in rocket nozzles can drastically change the color (and sometimes behavior) of the flame.

While the extreme compressive heating of spacecraft reentering Earth’s atmosphere at many miles/kilometers per second produces plasma instead of what humans recognize as fire, the general idea remains the same. Comparing the reentry tails of spacecraft like the Apollo Command Module, the Space Shuttle, and Orion makes it clear that each vehicle and heat shield produces a subtle but distinctly unique plasma tail over the course of several minutes of peak reentry heating, when the vehicle’s velocity is fast enough to compress atmospheric gases into plasma. Different ablators end up injecting different gases into the superheated plasma tail, hence the different appearance of each tail.

Transpiration cooling will be added wherever we see erosion of the shield. Starship needs to be ready to fly again immediately after landing. Zero refurbishment.

Aside from a unique lack of ablation for Starship’s stainless steel hull and curious hexagonal steel heat shield tiles, SpaceX may end up having to implement a wholly unproven technology known as transpiration cooling, in which some of liquid methane propellant would be intentionally pushed out from micro-scale holes drilled or perhaps laser-cut in certain hexagonal plates. After traveling through the steel skin/shield and out of the holes, the liquid methane would almost instantly vaporize into gas and then plasma as it confronts the spacecraft’s superheated bow shock wave, reducing the thermal loads on tiles with such an active cooling solution installed.

It’s unclear what the resulting methane-rich plasma plume might look like but it’s not out of the question that SpaceX’s graphic design team have either done the math themselves, so to speak, or asked engineers to verify what color Starship’s plasma tail might end up looking like. As shown in the latest render, a plume of hues ranging from light blue and indigo to red through white seems entirely plausible. Regardless, Starship is bound to look spectacular during orbital reentries thanks to its metallic skin and shield and planned hot structure, meaning that the entire windward half of the vehicle could end up glowing red, orange, yellow, and even white-hot, precisely like the thermal testing video Musk recently shared.

SpaceX’s first orbital Starship prototype is already under construction at the company’s ad-hoc South Texas ‘shipyard’, for lack of a better term. According to Musk, that vehicle could be ready to be done “around June” of this year, while its complimentary Super Heavy booster could begin assembly as early as April thru June, as well.