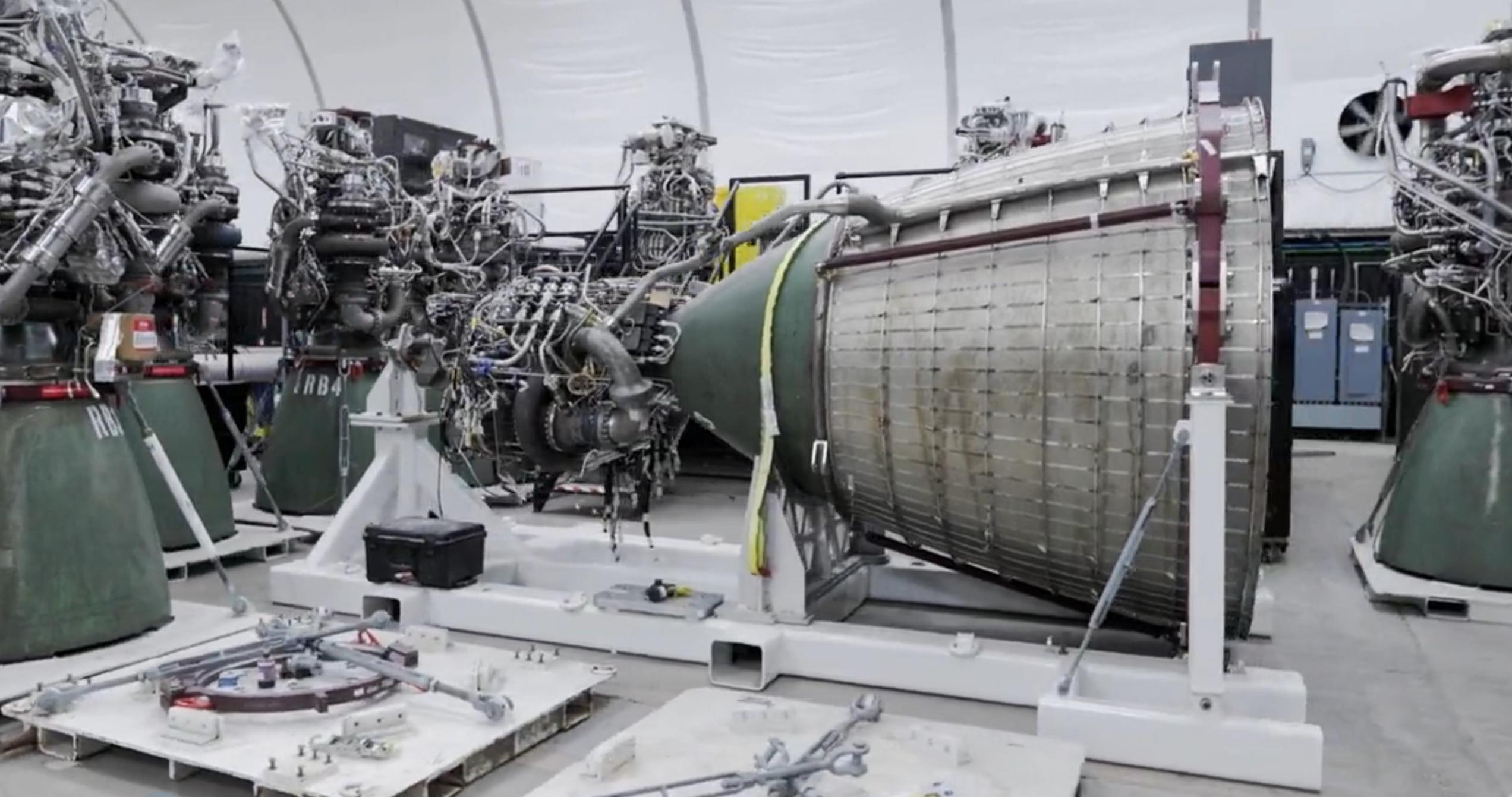 A Raptor Vacuum engine is pictured among sea-level siblings inside a Starbase hangar. (SpaceX)

For the second time, SpaceX is gearing up to install a full six Raptor engines on the first orbital-class Starship prototype.

This time around, though, there’s reason to believe that the preparations SpaceX is making aren’t a false start and could culminate in one or several record-breaking Starship static fires as early as next week.

SpaceX installed Raptors on Starship S20 for the first time in early August, outfitting the 50m (165 ft) tall prototype with a full six engines as part of a fit test that ultimately saw it installed on top of a Super Heavy booster. Ship 20 only spent an hour on top of Booster 4, though, and was quickly returned to Starbase build site for Raptor removal and final outfitting. Ship 20 was then rolled back to the launch site and installed on one of two suborbital launch mounts and test stands in mid-August, where it has sat ever since.

Between September 4th and 10th, SpaceX then appeared to install three sea-level-optimized Raptor Center (RC) engines and one Raptor Vacuum (RVac) engine on Starship S20 before the prototype had completed any proof testing. Whether that set of installs was a fit test or an aborted attempt at full installation, SpaceX seemingly paused at three or four Raptors and ultimately removed the lone RVac and one or more of S20’s sea-level engines. Another sea-level Raptor was (re)installed on September 15th.

After a frenetic month of back and forth with no obvious rhyme or reason, all of Ship 20’s Raptors were removed and a series of hydraulic rams used to simulate engine thrust – removed, unused, back in August – were reinstalled. Starship then completed pneumatic and cryogenic proof tests in the last few days of September.

After another ten or so days of unusual downtime, SpaceX began reinstalling Raptors on Ship 20 – one sea-level and one vacuum – around October 10th for a static fire test campaign that began about a week later. Finally, on October 21st, SpaceX fired up the orbital-class prototype for the first time, also completing the first test of a Raptor Vacuum engine installed on a Starship. Barely an hour later, Starship S20 performed a second test, simultaneously firing up both RVac and RC engine in another first.

Barely a full day after that successful back-to-back static fire test, SpaceX rolled two more sea-level Raptors to the suborbital pad and installed them on Ship 20. Another unusual week of downtime later and, on October 28th, SpaceX has rolled two more Raptor Vacuum engines from the build site to the launch pad and staged them beside Starship. Once installed, Starship S20 will, for the second time, be fully outfitted with six Raptors. Having already fired up two of those engines without needing either replaced, though, there’s a decent chance that all six will actually be used before Ship 20’s next bout of engine removal/installation deja vu.

SpaceX has never fired more than three engines at a time on a Starship prototype or at its suborbital test site, so a number of firsts potentially lay before Ship 20 as it nears a second round of static fire testing. There is some uncertainty as to whether the suborbital test stands can actually handle the stress from static fires with more than three Raptors, but if they can, then S20 will likely be the first prototype to ignite more 4+ engines and could become the first Starship to fire all six engines at once.

SpaceX currently has one possible test window scheduled from 10am to 6pm CDT on Monday, November 1st, though it could be another week or more before Starship S20’s next static fire attempt if past trends continue.