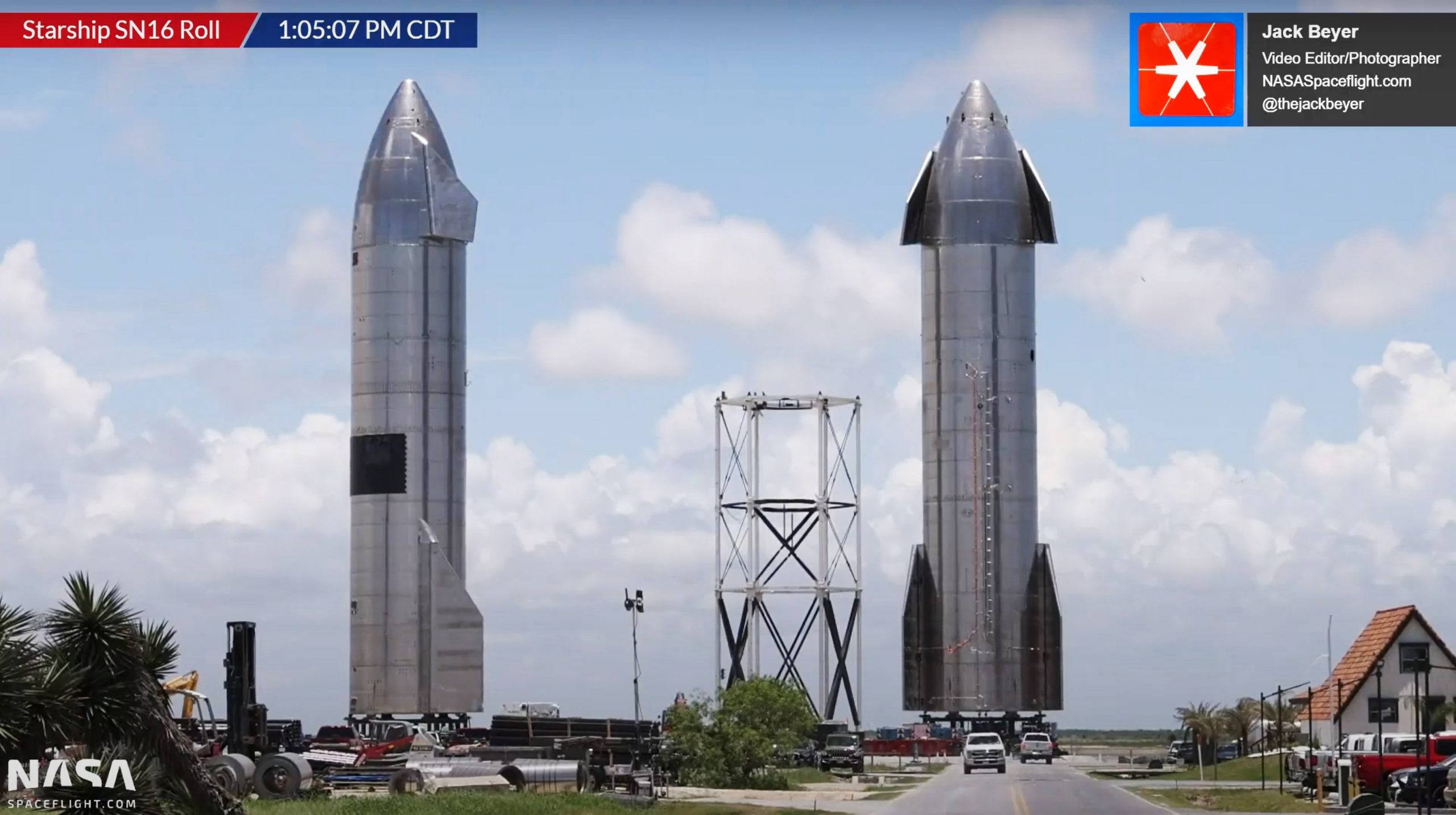 SpaceX has moved its newest finished Starship straight from its Boca Chica, Texas factory to a nearby ‘rocket garden,’ all but guaranteeing an early retirement.

Built as the first of several planned backups to Starship SN15, which debuted a number of significant upgrades in April and May, it appears that Starship serial number 16 (SN16) has been retired to a display stand after its only sibling became the first full-size prototype to successfully survive a launch and landing on May 5th. SN16 actually reached its full height before SN15 lifted off and was more or less complete by May 10th. Since then, the prototype has remaining more or less untouched, seemingly waiting for SpaceX to decide its fate in lieu of Starship SN15’s major success.

Ultimately, with SN16 now sitting side by side with SN15 at what will likely become a sort of open-air SpaceX museum, it appears that the company has made up its mind.

Once SN15 touched down, safed itself, and remained standing after a near-flawless 10 km (6.2 mi) test flight, questions about Starship SN16’s fate almost immediately arose. From the outside looking in, replicating that spectacular success was judged a logical next step by many in light of the four variously unsuccessful Starship launches that closely preceded it. If SpaceX could land SN15 and then successfully recover an entirely separate Starship weeks later, it would all but eliminate the possibility that – much like several different failure modes popped up on SN8 through SN11 – the first total success was a fluke.

Given that SN16 was quite literally completed within days of SN15’s launch and landing, it seemed an almost foregone conclusion that SN16 would fly. For a few weeks, it even looked possible that SpaceX would attempt to reuse Starship SN15. However, SpaceX appeared to decide against reuse and rolled its first flight-proven full-size Starship from the pad to a plot of land expected to host a future ‘garden’ for retired SpaceX rockets.

After its three intact flight-proven Raptor engines – valuable in their own right – were removed, Starship SN15 was seemingly retired around May 26th. Three weeks later, SN16 has (quite literally, to an extent) followed in SN15’s footsteps, bowing to an apparently virulent desire within (or at least atop) SpaceX to launch Starship into space and orbit as quickly as possible. From that perspective, assuming enough data was gathered by Starship SN15 to encourage significant confidence that its survival wasn’t an ‘accidental success,’ reusing Starship SN15 or flying Starship SN16 would only really benefit a line of prototypes that had just made itself obsolete.

Much like Starship SN15 debuted “hundreds of improvements” across the board, CEO Elon Musk revealed that Starship SN20 would also involve a “major technology [revision]” to produce the first prototypes with full heat shields, a stage separation mechanism, vacuum-optimized Raptor engines, and more. In fact, that process may still be ongoing, which could explain why SpaceX has yet to begin assembling Starship SN20 – various subsections and components of which have already been completed in Boca Chica.

Confirmed by Musk in March, SpaceX has been working towards a target of no later than July 2021 for Starship’s first orbital test flight. Given that Starship SN20 has yet to enter the assembly phase and that Super Heavy “Booster 2” (BN3) will be the first of its kind and likely need to pass several major tests on its own, July is no longer within reach. Of course, an orbital launch attempt anytime in 2021 would still be a staggering achievement for SpaceX, beating the likes of Vulcan Centaur, New Glenn, and Ariane 6 to the punch despite Starship’s superior performance, unprecedented design challenges, and grander ambitions.