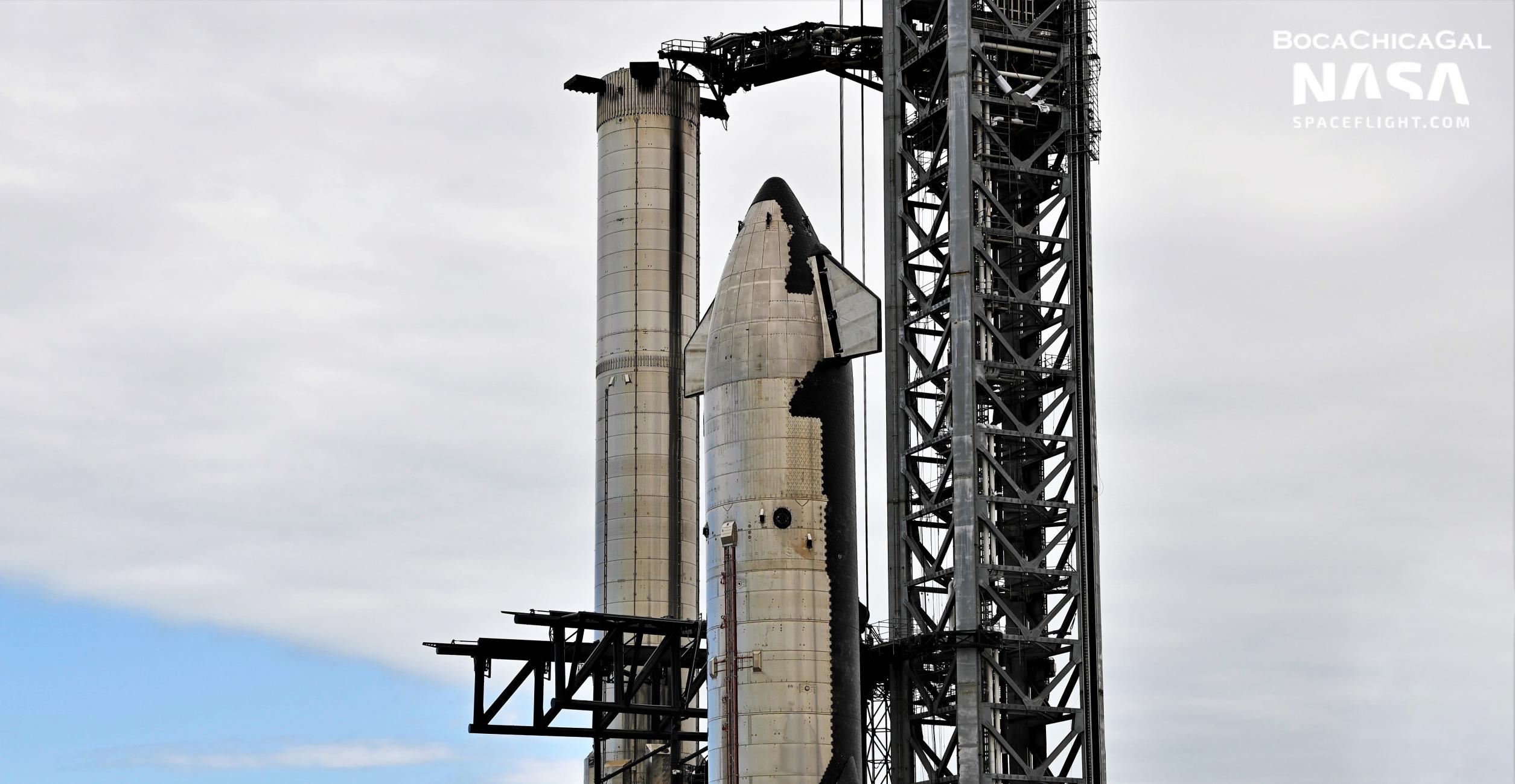 SpaceX appears to be preparing Starship 20 and Super Heavy Booster 4 for their third ‘full stack’ demonstration after two seemingly successful tests in August 2021 and February 2022.

The first, completed in early August 2021, was mostly for show and saw SpaceX stack the unfinished prototypes with a giant crane – fighting the coastal winds throughout. After just a few hours stacked, Ship 20 was removed and returned to Starbase, where workers spent several more weeks (mostly) finishing the prototype. Booster 4 followed suit several weeks later and ultimately took another three months of work to reach some level of test readiness.

After Ship 20 and Booster 4 completed a series of tests in the last few months of 2021 and early 2022, the two were re-stacked in mid-February – once again for show. This time, the stacked Starship served as a backdrop for SpaceX CEO Elon Musk’s first official Starship presentation in more than two years. However, despite the fact that neither prototype was actually tested during the second stack, SpaceX did use the opportunity to partially debut Starbase’s ‘orbital launch integration tower’ and used that towers trio of giant arms to lift, stack, and stabilize Starship S20 on top of Super Heavy B4.

Ship 20 was ‘destacked’ with the tower’s arms just a few days after Musk’s event – an undeniably rapid and impressive achievement for the first real use of the ‘chopstick’ arms but still far from demonstrating that Ship 20, Booster 4, or the orbital launch site (OLS) are ready for orbital test flights. Since then, however, Starbase’s launch facilities have admittedly been almost as busy as they’ve ever been with Starship and Super Heavy cryoproof tests.

Ship 20 completed its first basic OLS cryogenic proof test or ‘cryoproof’ just two days after it was destacked. Additional Starship S20 cryoproofs followed on February 17th (the day after), February 22nd, and March 3rd. Super Heavy B4 completed its own cryoproofs on February 18th and March 1st, the latter of which may have actually been the fullest a Starship booster has ever been filled. All told, SpaceX completed no less than six major B4/S20 cryoproof tests in 15 days.

Crucially, all six cryoproofs were performed with Starbase’s nascent orbital tank farm, thoroughly testing its storage and distribution capabilities. Additionally, because SpaceX began liquid methane deliveries on February 13th, some of those tests – particularly with Ship 20 – may have even been proper wet dress rehearsals, meaning that SpaceX may have filled the rocket(s) with liquid methane (LCH4) and liquid oxygen (LOx) propellant to replicate preparations for a real launch.

At a minimum, Super Heavy Booster 4’s oxidizer tank was fully filled with liquid oxygen – and possibly pressurized with hot gaseous oxygen – during its March 1st cryoproof, while its fuel tank was filled about two-thirds of the way either with liquid nitrogen (LN2) or methane. Prior to its February and March tests, Booster 4 had already completed three cryoproofs – some also using LOx – in December 2021. Ship 20 had completed a cryoproof and four static fire tests.

All told, short of finally performing a full Super Heavy wet dress rehearsal and static fire at the orbital launch site, it’s not all that clear what more SpaceX can derive from additional individual cryoproof testing of Ship 20 or Booster 4. Several things do still need to be demonstrated, however. First, the OLS launch tower has yet to use its arms to remotely install a Super Heavy on the orbital launch mount. More importantly, SpaceX has yet to use the launch tower and its swinging ship umbilical arm to cryoproof or fuel a Starship while stacked on top of a Super Heavy. Finally, SpaceX has also yet to simultaneously perform a cryoproof or wet dress rehearsal test of a stacked Starship and Super Heavy, which will be necessary for orbital test flights.

One or several of those to-be-completed tests may be why SpaceX appears to have begun preparing to install Ship 20 on top of Booster 4 for the third time. On March 14th, Starship S20 was moved towards the launch tower and on March 15th, the ship was slotted between its ‘chopstick’ arms. Based on stack #2, the ship could be lifted at any point – day or night – and installed on top of Super Heavy in a matter of hours.