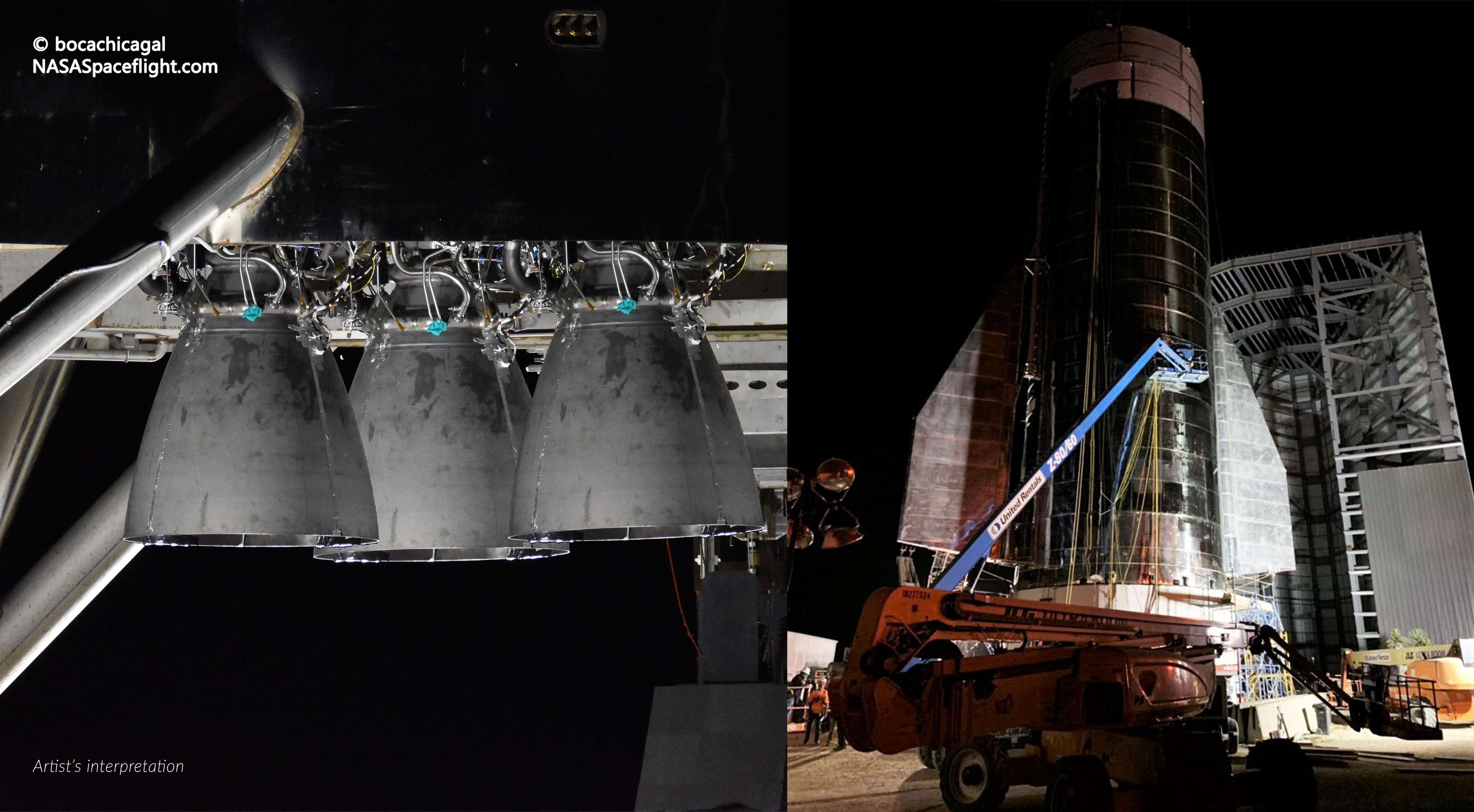 A Teslarati artist's impression of a triple-Raptor Starship and a September 23rd photo of the spacecraft's bottom half taken by Elon Musk. (NASASpaceflight - bocachicagal, Elon Musk, Teslarati)

SpaceX is in the midst of a frenetic few weeks of activity as technicians and engineers – some likely flown in from Florida – work around the clock to ready Starship Mk1 for its first flight tests. Musk is also scheduled to present an official update on Starship’s latest design on September 28th and likely wants to have a complete Starship (or nearly so) as an imposing backdrop for the media event.

The news that SpaceX has already installed all three Raptor engines on Starship Mk1 comes as a surprise, an exceedingly rare instance thanks to near-continuous coverage provided by several local residents and 24/7 livestreams. On September 22nd, at least one Raptor engine was spotted arriving in Boca Chica, but no onlookers noticed engine installation operations.

Capable of producing 600+ metric tons (1.3M lbf) of thrust, those three Raptors were attached to a custom-fabricated thrust structure that was installed inside Starship Mk1 on August 14th, barely a month ago. There’s a chance that one or several of the Raptors installed are nonfunctional spares, but it’s likely that the engines installed are ready for flight and have completed static fires in McGregor, Texas. As such, they could very well be the engines that will power Starship’s inaugural flight tests, the first of which will involve a suborbital launch to an altitude of more than 20 km (12.5 mi).

Musk says that Starship Mk1’s three segments could be stacked atop each other as early as Wednesday, September 25th, also implying that the spacecraft prototype’s nose section should be fully outfitted with batteries, header tanks (small propellant tanks), its own actuating fins, and more in the next 2-3 days.

Additionally, Musk published a brief video inside SpaceX’s recently-completed Boca Chica Starship fabrication building, the only semi-permanent building the company has built at its South Texas facilities. Featuring an abstract series of mirror-like steel panels that created a bit of a house-of-mirrors effect, Musk says the items pictured will be combined to form Starship Mk1 wing hinges and raceways, an external tunnel used for plumbing and cable routing.

SpaceX installed both of Starship Mk1’s aft wings/flaps over a 48 hour period, wrapping up the basic mechanical integration on September 22nd. Work has started on the prototype’s raceway and the frames of the first two wing hinge covers were spotted on Friday. As of midnight local time on September 23rd, SpaceX technicians were welding propellant feed lines to the outside of Starship’s tank section and installing the rocket’s header tanks – small secondary propellant tanks – inside its pointed nose section.