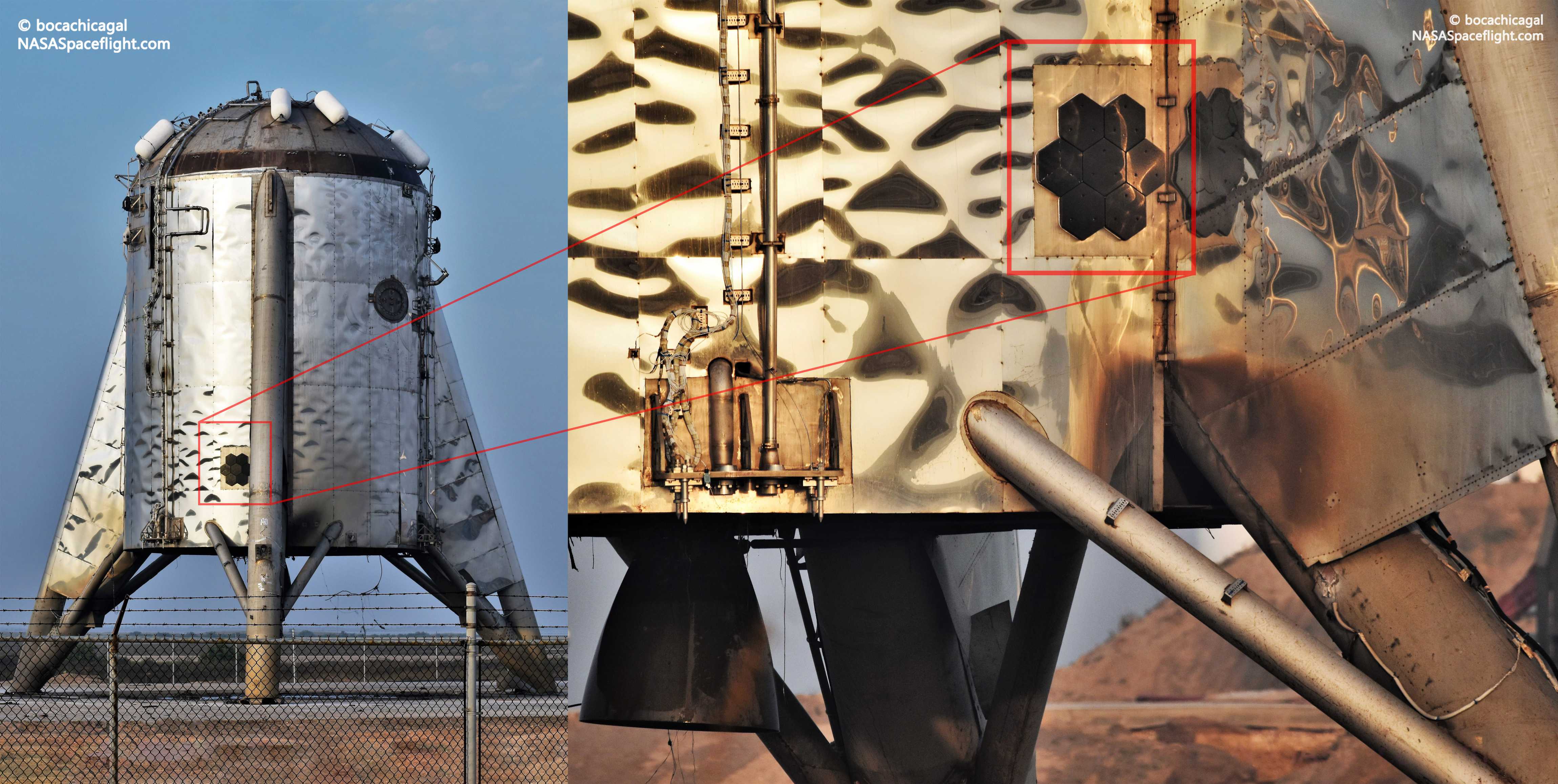 Although it flew under the radar in the heat of the moment, SpaceX’s final Starhopper test flight – completed on August 27th – happened to include an unusual bit of test hardware – eight (give or take) ceramic Starship heat shield tiles.

On the same day that Starhopper lifted off for the last time and completed a 150m (500 ft) hop test in South Texas, SpaceX Cargo Dragon capsule C108 wrapped up its third successful orbital mission, reentering Earth’s atmosphere with a complement of several ceramic Starship heat shield tiles. This marked the first known orbital test of Starship hardware on the same exact day that Starhopper was putting nearly identical tiles through an entirely different kind of flight test.

As pictured above, a group of seven hexagonal tiles appeared on Starhopper’s exterior around August 14th. Those tiles were black (somewhere between matte and glossy), featured indents likely related to manufacturing or mounting, and appeared to be attached to Starhopper by way of a white, marshmallow-esque adhesive. Altogether, each tile bears a striking resemblance to two-thirds of a hexagonal Oreo cookie, arranged in a grid and sort of squished onto Starhopper.

Aside from the seven tiles attached directly to the exterior Starhopper’s liquid methane tank, at least one additional tile was spotted on a small mount structure welded to the bottom of one of the vehicle’s tripod legs. Likely just five or so meters (~15 feet) away from Starhopper’s Raptor engine, that particular tile would have been subjected to intense heating and sound (i.e. thermal and acoustic shock) during the Starship testbed’s final ~60-second flight.

It is a busy morning at the Starship Hopper launch site!

In fact, the Raptor-facing tile may have been put through an even more stressful test than intended, owing to the apparent difficulties Raptor SN06 had during its minute-long performance. Whether the result of shoddy installation and plumbing or an issue with Raptor itself, the engine demonstrated some unusual behavior as it throttled down for Starhopper’s landing, turning its largely transparent exhaust plume into a massive flamethrower.

Raptor or adjacent plumbing also appeared to suffer some kind of leak just before landing, producing significant flames that clearly scorched Starhopper’s rear and destroyed a huge amount of cabling in the area, visible just below the hexagonal tile group. Likely related, several views of the test showed a COPV flying off – clearing having suffered an anomaly that broke it free from Starhopper – around the same time as the vehicle ended its hop with a hard landing.

This does raise the question: why were prototype Starship heat shield tiles attached to Starhopper, a distinctly suborbital prototype that never reached a speed of ~20 m/s (40 mph), let alone orbital velocity? Without actually performing a reentry, what value could be derived? Taken alongside the almost-simultaneous orbital reentry test of four separate Cargo Dragon-shaped tile prototypes, the likely explanation is actually pretty simple and serves as an excellent example of SpaceX’s agile approach to aerospace development.

The lone Raptor-adjacent tile was subjected to heating from a live engine just a dozen or so feet away, along with all the brutal acoustic stresses associated with it, perhaps including an unintended fire during anomalous engine performance. Cargo Dragon C108’s four ceramic tiles were far closer to a full-fidelity test, although they were shaped for and attached to the spacecraft in a manner that minimized their one-to-one relevance to Starship’s likely shield design. Regardless of the level of the test’s fidelity, they still managed to survive a true-to-life orbital reentry with nothing more than some soot stains from Dragon’s normal PICA-X shield material.

In short, SpaceX (hopefully successfully) demonstrated a large number of Starship’s ceramic tile design requirements before an actual flight-capable Mk1 or Mk2 Starship is ready for comparable testing. Of course, the most important tests will involve a combination of all Starship-relevant conditions (Raptor engines, cryogenic tank-wall mounting, hexagonal tiles, weeks spent in space, orbital reentry, etc.) for a full-fidelity reentry campaign with an actual Starship prototype. SpaceX CEO Elon Musk says those tests could begin very soon – as early as October 2019 – and the suite of piecemeal Cargo Dragon and Starhopper tests that prototype tiles have already completed will undoubtedly grease the wheels towards that ambitious goal.