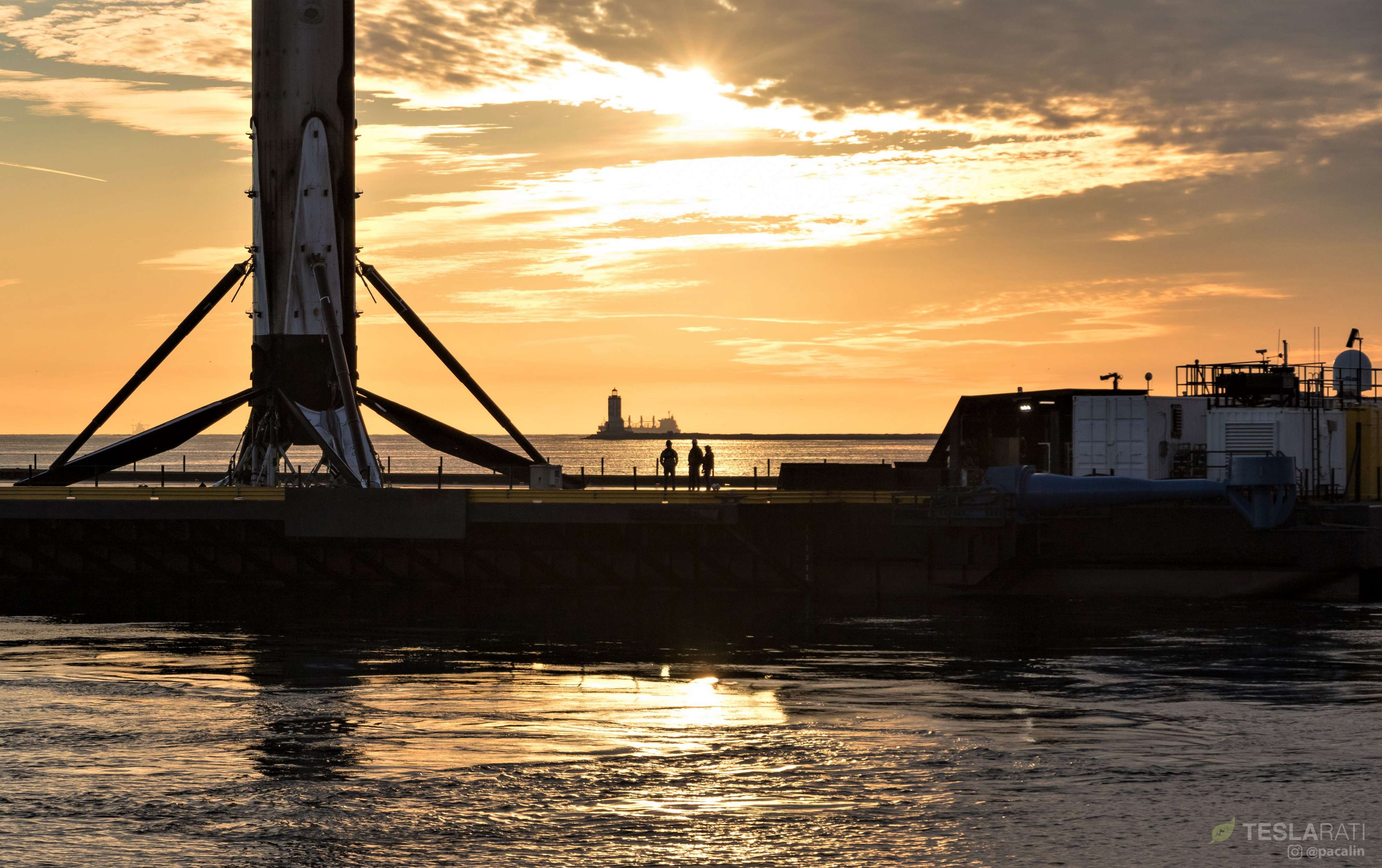 Late Falcon 9 booster B1048 sails into Port of Los Angeles. A new SpaceX lease in an adjacent port suggests that the view could return to the West Coast after a more than three-year hiatus. (Pauline Acalin)

Amid a major hiring push and calls for monthly launches, SpaceX has taken its latest step towards launching Starlink satellites from the West Coast with a lease for rocket recovery ship dock space at the Port of Long Beach.

News of the port lease broke on April 26th with a tweet from the mayor of Long Beach, California after the Port of Long Beach (POLB) Commission voted to approve SpaceX’s 24-month sublease with an effective start date of May 1st, 2021. From 2014 to 2020, a massive floating rocket launch complex and associated service ships once used by SeaLaunch called POLB’s Pier 16 home while mothballed and the company left behind a decent amount of infrastructure when it vacated the facility last year.

That includes a ~5600 square meter (~65,000 sq ft) warehouse and office space formerly used to process SeaLaunch payloads and Ukrainian Zenit rockets, as well as a pier and dock space generally optimized for loading and unloading large rockets from rocket transport ships. In other words, Pier 16 is a perfect fit for SpaceX’s needs.

The news came as a surprise because SpaceX already has a lease for several berths and dock space at Port of San Pedro, which – along with Port of Long Beach – makes up the greater Port of Los Angeles. SpaceX has used those facilities for the better part of a decade – initially to support Dragon spacecraft recoveries but later as a hub for drone ship Just Read The Instructions (JRTI) and fairing recovery ship Mr. Steven (later Ms. Tree).

SpaceX has a bit of a sordid history with port leases over the last several years after twice entering and backing out of Port of Los Angeles (San Pedro) lease agreements to build a Starship factory directly on the water in 2018 and 2020. This time around, POLB commission documents indicate that this new lease is not the third in a line of ill-fated Starship factory plans – but instead a simple relocation of existing West Coast Falcon rocket recovery operations just two miles east of their current home.

It’s unclear why exactly SpaceX is leasing much larger berth and dock space at a port in competition with its current Port of Los Angeles landlord or if Pier 16 will be an addition to – or a replacement for – its current berths to the west. At approximately $100,000 per month, Pier 16 will be substantially more expensive, ruling out cost savings, which could mean that SpaceX has reason to believe that its West Coast rocket recovery operations are going to experience a substantial uptick in activity in the near future.

Indeed, in retrospect, SpaceX’s current Port of San Pedro berths and dock space have always been fairly limited, offering just enough space for a few small tents on concrete and a drone ship and two support vessels to park end to end. Assuming SpaceX moves all operations to Pier 16 and closes out its San Pedro lease, the new facilities should offer a bit more dock space along the pier itself, as well as far more room – and an existing warehouse with offices – to process recovered Falcon boosters and fairings.

Over half a decade of operations, SpaceX recovered Falcon boosters with drone ship JRTI just seven times (of eight attempts) on the West Coast, making it clear why the company simply chose to make do with close quarters and a barebones dockside setup. Now, however, SpaceX appears to be preparing its Vandenberg Air Force Base (VAFB) launch site and associated Port of LA recovery assets for a far more ambitious period of Falcon 9 launch activity.

Other observations support that conclusion. Over the last six or so months, SpaceX has been aggressively hiring to fully outfit its VAFB SLC-4 launch pad after supporting just two West Coast launches in the last ~28 months. Most notably, hiring ‘flyers’ distributed on social media by SpaceX employees touted a target of monthly launches from the company’s West Coast pad – an unprecedented cadence over the decade SpaceX has leased it.

With its hiring campaign finally starting to slow down and a new Port of Long Beach lease set to open on May 1st, the only real ‘missing link’ for SpaceX’s plans to restart regular West Coast Falcon 9 launches is the fleet of ships the company will need to recover Falcon boosters and payload fairings. To maximize efficiency, dedicated polar Starlink launches will require Falcon 9 boosters to land far downrange and will be even more challenging than the rocket’s now-routine missions to low Earth orbit (LEO), which require almost every ounce of performance the rocket can give.

SpaceX transported its second drone ship – Just Read The Instructions (JRTI) – across the Panama Canal from Port of LA to Port Canaveral, Florida in 2019, where it still operates today. To achieve SpaceX’s planned cadence of up to 48 launches in 2021, the company will almost certainly need both drone ships on the East Coast. A third drone ship – named A Shortfall Of Gravitas (ASOG) – has been in the works for years, though SpaceX CEO Elon Musk has long described the vessel as an addition to the company’s Florida fleet that would enable Falcon Heavy to land all three first-stage boosters at sea for maximum payload capacity.

For now, we’ll just have to wait and see if SpaceX intends to send that third drone ship directly to California to support an imminent series of polar Starlink launches.