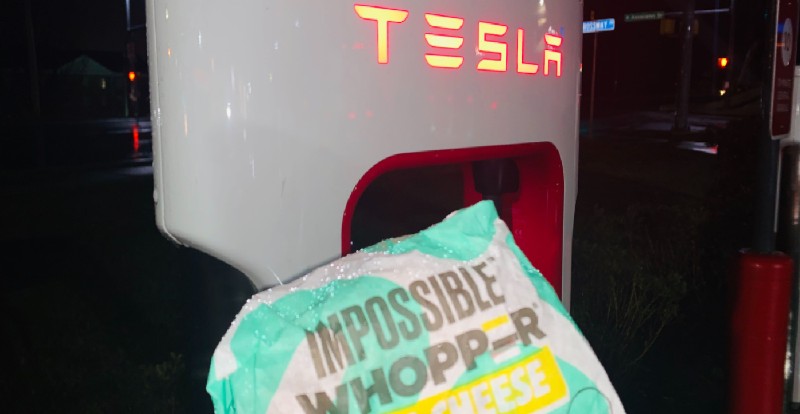 Tesla’s mission for sustainability and goal to reach price parity with its petrol-powered competition in the transportation industry is also starting to take shape in the food industry. The world of meat alternatives is currently competing with animal products to achieve the same goal: price parity to promote environmental sustainability in food, an item crucial for everyday survival.

Since the release of Tesla CEO Elon Musk’s Master Plan, the goal has always been to offer affordable and environmentally sustainable options to drivers everywhere. To do this, Tesla’s ultimate goal is to drive the cost down of batteries to $100 per kWh and close the gap between the cost of electric vehicles and gas vehicles.

Similarly, meat alternatives are fighting for the same price parity in their own way. The goal of meat alternative companies like Beyond Meats and Impossible Foods is to offer options to traditional beef products at equal prices so the average consumer will consider buying sustainable and more environmentally-friendly foods that satisfy their cravings. After CNBC reported Impossible Foods’ prices were slashed by 15% earlier this week because manufacturing efficiencies and large scale production, price parity is closer than ever.

The argument against electric cars and sustainably-produced foods has always been price. As electric vehicles, Tesla’s, in particular, started expensive, they have slowly dropped in price while increasing performance and efficiency. Batteries that power the cars have become a mass-produced item, thus forcing the price of cells to drop dramatically. Eventually, this will lead to batteries being produced at the $100 kWh target, inducing price parity.

This story is no different than meat alternatives. When Beyond Meats and Impossible Foods were formed in 2009 and 2011 respectively, the goal was to create products that would give people “meat” without the adverse environmental or health effects that come from eating real beef. The battle with the new “meat” products was that they were expensive to produce; thus, many people did not see the advantage of buying them.

However, the environmental movement has grown considerably because of the increased awareness of climate change. People are now willing to cut some meat out of their diets to fight industrial farming and are replacing it with meat alternatives. As many people across the world have embraced these new meat alternatives, large scale businesses like Burger King have adapted the products because of increased demand.

The increase in demand for meat alternatives has led to lower prices. Just like electric vehicle batteries, mass production has contributed to a decrease in price, and eventually, this will lead to price parity with real meat. Beyond Meat CEO Ethan Brown predicts his company will reach price parity with natural beef products in 2024, one year after analysts believe EVs will reach parity with gas vehicles.

In the grand scheme of things, the goal between battery vehicles and meat substitutes is the same: increase environmental sustainability by offering products that are equivalent to the things people have been using for their whole lives. Turn people away from things that harm the environment and make sustainable alternatives just as affordable as their competitors, eliminating the argument that battery cars or meatless options are “too expensive” and “unaffordable.”