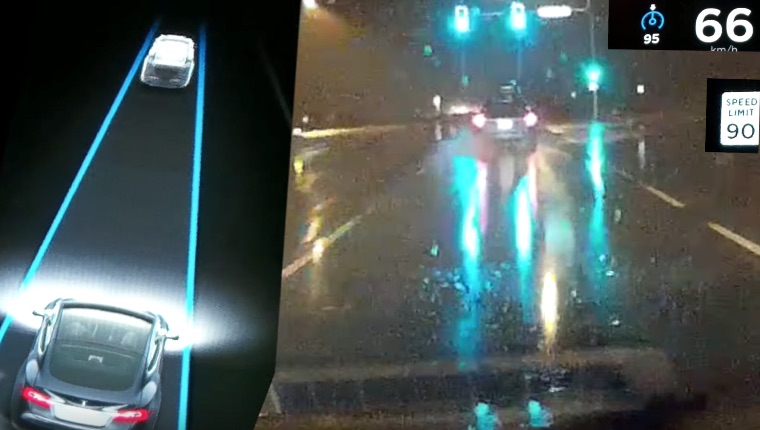 Experienced drivers will not be surprised by the Department of Transport finding that 22% of crashes and 16% of fatalities happen in bad weather. Some may suspect the dangers are ice and snow, but it is rain and wet pavement that account for the great majority of weather-related accidents.

In heavy rain, especially at night, our sense of the road is significantly degraded. Bright lights reflecting off the shiny black road make lane-markings difficult to distinguish. Powerful windshield wipers struggle to keep up with pounding rain. Passing vehicles unexpectedly throw dense bunches of water onto the windscreen, blinding us temporarily at the very moments we need our undivided attention on the road.

It can be surprising to watch Autopilot perform in such difficult weather. In good daytime weather, our critical eye may judge the automated system as performing only about on a par with our own confident driving abilities. However, in nighttime rainstorms, when our perceptive abilities and responses may be uncomfortably taxed to their limits, Autopilot seems more certain. Although Autopilot’s detection systems are similarly challenged, to a degree, it is at the times when things get most difficult for us that we begin to see in Autopilot a potentially life-saving ally.

In this video you can see representations of Autopilot’s sensors on the Tesla display screen as it switches rapidly among its sensing tools. The camera, radar and ultrasonic inputs to Autopilot’s software are displayed in real time. Autopilot’s primary focus is on detecting lane-markings, which glow blue on the dash screen. Often, one or the other of the two markings disappear as they become undetectable to the camera. As one disappears, the other often becomes detectable again. This goes on, switching back and forth; one is visible, then the other, then both. But sometimes they are both gone at the same time. When this happens, on the screen the vehicle ahead turns from its camera registered grey to the radar-tracked blue. Remarkably, when operating on radar alone, and even while traversing long curves, the Tesla remains safely in its lane.

All the while, ultrasonic sensors register adjacent vehicles and roadway infrastructure, indicated onscreen as waves of graduated, color-coded light; safe, informative white, cautious orange and sometimes, dangerous red. The Autopilot screen flickers its rapid switching among its detection tools, faster than the eye can absorb, as the Tesla ploughs through the rain and keeps comfortably in its lane.

The video shows Autopilot performing in a variety of situations,. The most surprising sequence is shown at the end when there is no vehicle ahead, and all other detection indications are absent; no blue glow of the lane-markings and of course no forward vehicle in the urgently needed radar-tracked blue. While Autopilot is apparently receiving no road orientation guidance, the Tesla inexplicably remains centered in its lane, following the curve of the darkened road.

My hands were on the wheel, ready to take control at all times during this 90 minute journey, (only three minutes shown in the video). I corrected Autopilot twice, once when it appeared to be following a car that was changing lanes, and once when it indicated a truck (represented momentarily as a car), as being off the road to the right when it wasn’t. That time, at 2:15 in the video, my correction is shown, which may or may not have been necessary, but probably was.

At this stage in its development, supervising Autopilot takes perhaps even more attention than when a person is driving the car himself.  Even so, the combination of Autopilot’s near flawless performance and my oversight certainly made this a safe drive.  When Autopilot becomes fully autonomous, difficult driving conditions will be much safer than what accident statistics tell us they are today.