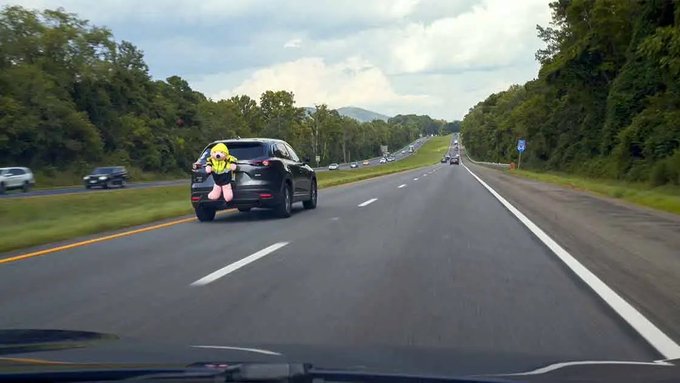 The Insurance Institute for Highway Safety (IIHS) recently published the results of a rather unique real-world driver attentiveness test. Using a 2019 Mercedes-Benz C300 equipped with a Level 2 Advanced Driver Assistance System (ADAS) and a giant pink teddy bear dressed in a yellow high-visibility jacket, the agency was able to roughly determine if systems like GM’s Super Cruise and Tesla’s Autopilot make drivers less attentive on the road.

To test the drivers’ situational awareness, the IIHS had an SUV with a giant pink teddy bear strapped to its back pass the Mercedes-Benz C300 three times as the participants drove over a stretch of Interstate 70 in Maryland for about an hour. Each time, the SUV with the massive stuffed bear stayed in front of the drivers for about 30 seconds. Researchers then measured the participants’ reactions after their driving session, while asking if they saw anything odd during their hour-long drive.

“Our data suggest that Level 2 driving automation has the potential to improve a driver’s situational awareness (SA) once he or she is familiar with the technology, although it does not guarantee it. Unfamiliar drivers, however, appear to have even more difficulty maintaining SA when using the system than when driving without it. On average, participants who were familiar with Level 2 systems showed the highest degree of SA about the bear when using the system, unfamiliar participants who drove with the system off had moderate SA, and unfamiliar participants who drove with the system on demonstrated the lowest SA,” the IIHS wrote.

Videos from inside the C300 showed that the drivers who correctly identified the giant stuffed bear actually spent more time scanning the road ahead of them. These drivers, particularly those familiar with Level 2 systems, even tended to look out of the car’s side windows. On the other hand, those who missed the bear spent a considerable amount of time just focusing on the road straight ahead. Drivers who failed to spot the bear even once spent considerable time looking at various aspects of the C300’s dash.

Considering the results of the IIHS’ study, it appears that some experience with Level 2 systems would be best for drivers before they are allowed access to more advanced driver-assist systems such as Tesla’s Full Self-Driving Beta, which is poised to be rolled out to a greater number of electric car owners in a couple of weeks. Situational awareness, after all, is critical when driving, and having drivers nervously fiddling around their vehicles’ features while operating a Level 2 system may present some risks. That being said, the IIHS’ results do go in line with one of Elon Musk’s more notable points–systems like Autopilot could actually perform as a formidable safety feature, provided that they are used responsibly and properly, of course.

The IIHS’ situational awareness study could be accessed below.