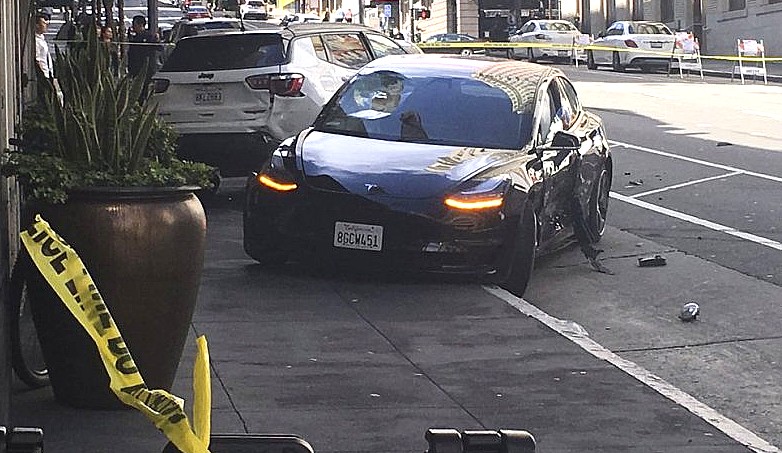 Tesla Autopilot was not on during deadly San Francisco crash, says investigators

Investigators have determined that Tesla’s Autopilot feature was not to blame for a tragic Model 3 crash in San Francisco this past Sunday, which claimed the life of one person and left another with critical injuries.

The announcement comes days after San Francisco authorities stated that they are checking to see if Autopilot had been engaged during the time of the accident, which involved a Model 3 running a red light, hitting a Mini Cooper, and striking two pedestrians — Benjamin and Kelly Dean, who were in the area to celebrate their third wedding anniversary. Kelly remains in critical condition while her husband, Benjamin, succumbed to his injuries.

Police noted that the Model 3 was running at least 45 mph when it ran the red light, despite the area being a 25-30 mph zone. The vehicle, which was rented from the GetAround app, was driven by 21-year-old Kelsey Cambridge of Vallejo, who was booked on suspicion of vehicular manslaughter and running a red light. It should be noted that GetAround requires users to be at least 25 years old to gain access to specialty vehicles.

In a statement to the SF Gate, a spokesperson for the San Francisco Police Department noted on Wednesday that “preliminary information” from investigators indicate that the ill-fated Model 3’s Autopilot feature “was not in operation at the time of the incident.” The police department’s Traffic Collision Investigation Unit are now “preparing search warrants and working with Tesla, Inc. to obtain documentary evidence.”

“Investigators also removed a data storage device from the Tesla. The information contained in the device will be analyzed to help determine the actions and events that lead up to the collision,” SFPD Officer Adam Lobsinger said.

Joe Nannery, a former SFPD lieutenant with some experience with Teslas, explained in a statement to ABC7 News that search warrants are standard procedure for investigations into incidents such as this past Sunday’s crash. “It’s a pretty common procedure for a big company if you are going to ask for records that they maintain that you would want a search warrant if you are going to want those records released to you,” he said.

Now that Autopilot has mainly been absolved of any blame for the fatal crash, Nannery noted that it is now safe to assume that the Model 3’s driver was at fault. “So far that’s what it looks like, yes. Speed was the primary collision factor,” he said.

Sgt. Frank Harrell, a motorcycle officer with SFPD, noted in a statement to CBS Global that there have already been 14 or 15 fatalities in the area. “It’s very upsetting. I mean, what are we at now? Fourteen or 15 fatalities regarding vehicle versus pedestrians in the city? Me and my officers are responding to these calls. It’s becoming very upsetting,” he said.

Elvia McKinley, who witnessed the tragic crash, added that the particular intersection where the Tesla driver ran the red light is notably dangerous. “This intersection is very dangerous–Taylor and O’Farrell–people are always speeding and don’t have…they don’t follow the law. It’s really sad that people have to die because people want to run a red light,” McKinley remarked.

Tesla Autopilot was not on during deadly San Francisco crash, says investigators