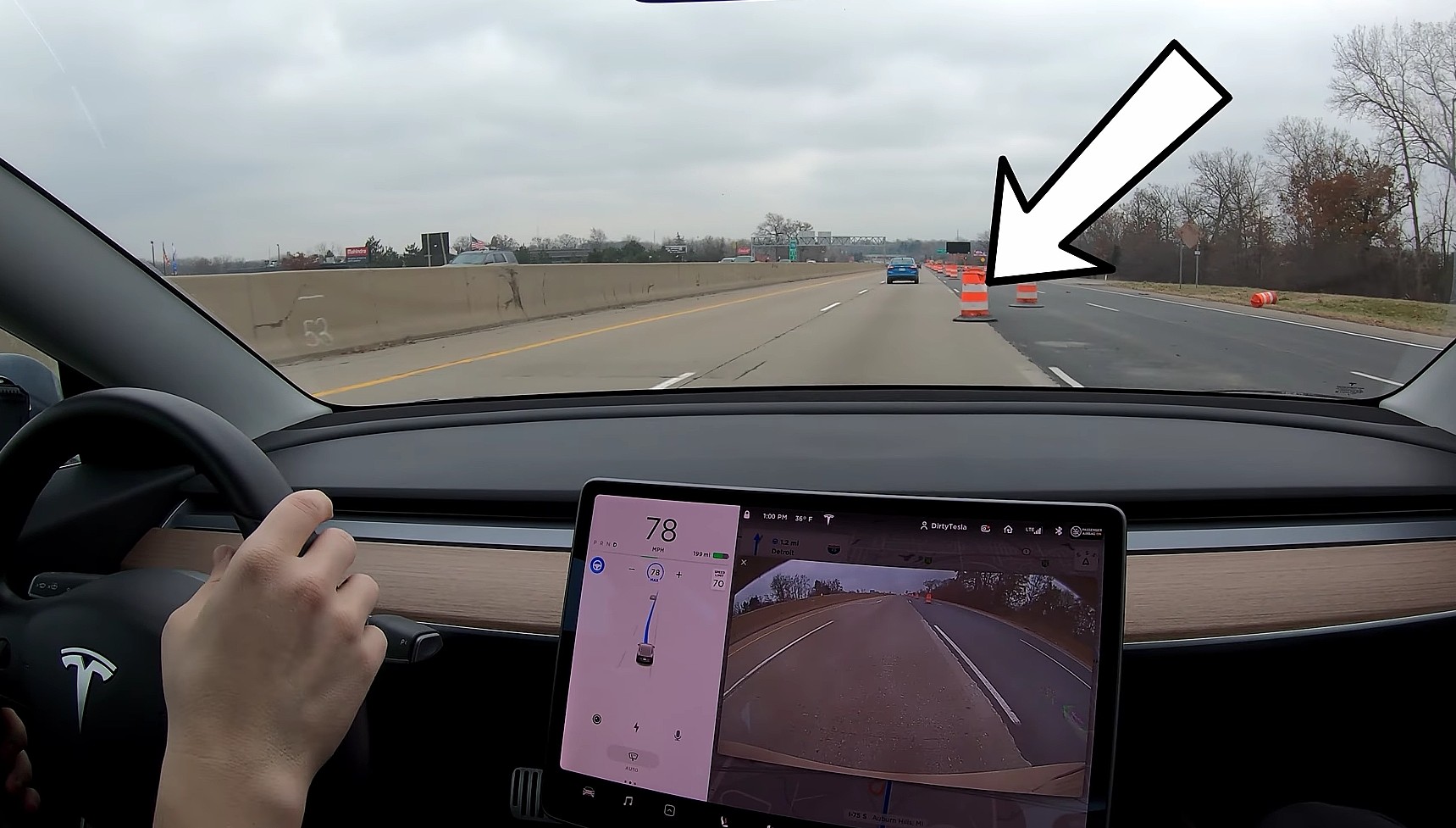 Tesla’s Autopilot continues to get more refined with each new update, and if a recent video from a Model 3 owner is any indication, it appears that the driver-assist system is getting more capable in recognizing and reacting to unexpected incidents on the road. Take, for example, a rogue construction cone strangely placed in the Tesla’s lane.

Chris of the Dirty Tesla YouTube channel was conducting one of his “Tesla Challenge” videos when his Model 3, which was running 2019.40.1.1, encountered a construction site. The area was lined with numerous construction barrels, some of which started cutting off the Model 3’s lane. This proved to be no problem for Autopilot, as the driver-assist system simply moved to the next lane without missing a beat.

As with many things in the freeway, something unexpected happened. At the end of the row of construction cones was a barrel that was actually in the Model 3’s lane. Hands ready at the steering wheel, the Tesla owner prepared to take over just in case the Autopilot does not react properly. But it did. As could be seen in the footage, the Model 3 avoided the stray construction cone before moving back to the center of its lane.

This is quite an improvement in Tesla’s driver-assist system, as the Model 3 ended up almost crossing into the next lane when it maneuvered around the rogue construction barrel. A look at the footage from the vehicle’s built-in dashcam showed just how close the Model 3 was to crossing into the adjacent lane during its evasive maneuver. The vehicle did not reduce its speed either when it avoided the construction zone.

Unfortunately, Chris’ Model 3 is still equipped with Hardware 2.5 and thus, the construction cones on the road were not rendered on the vehicle’s center display. Had the car been equipped with HW 3.0, it would have likely depicted the exact location of the rogue barrel as Autopilot evaded it. This seemed to be the case, as Navigate on Autopilot’s blue line actually curved when the Model 3 was avoiding the construction barrel.

These incidents hint at the subtle Autopilot improvements that Tesla has been releasing to its fleet with each new software update. With each improvement, the electric car maker is stepping a bit forward towards Elon Musk’s goal of releasing a feature-complete version of Full Self-Driving to the company’s early access users by the end of the year. With references to inner-city driving being found in Tesla’s source code, and with Navigate on Autopilot becoming more and more robust, Musk’s optimistic target may prove to be feasible after all.

Watch Dirty Tesla‘s encounter with the stray construction barrel in the video below.