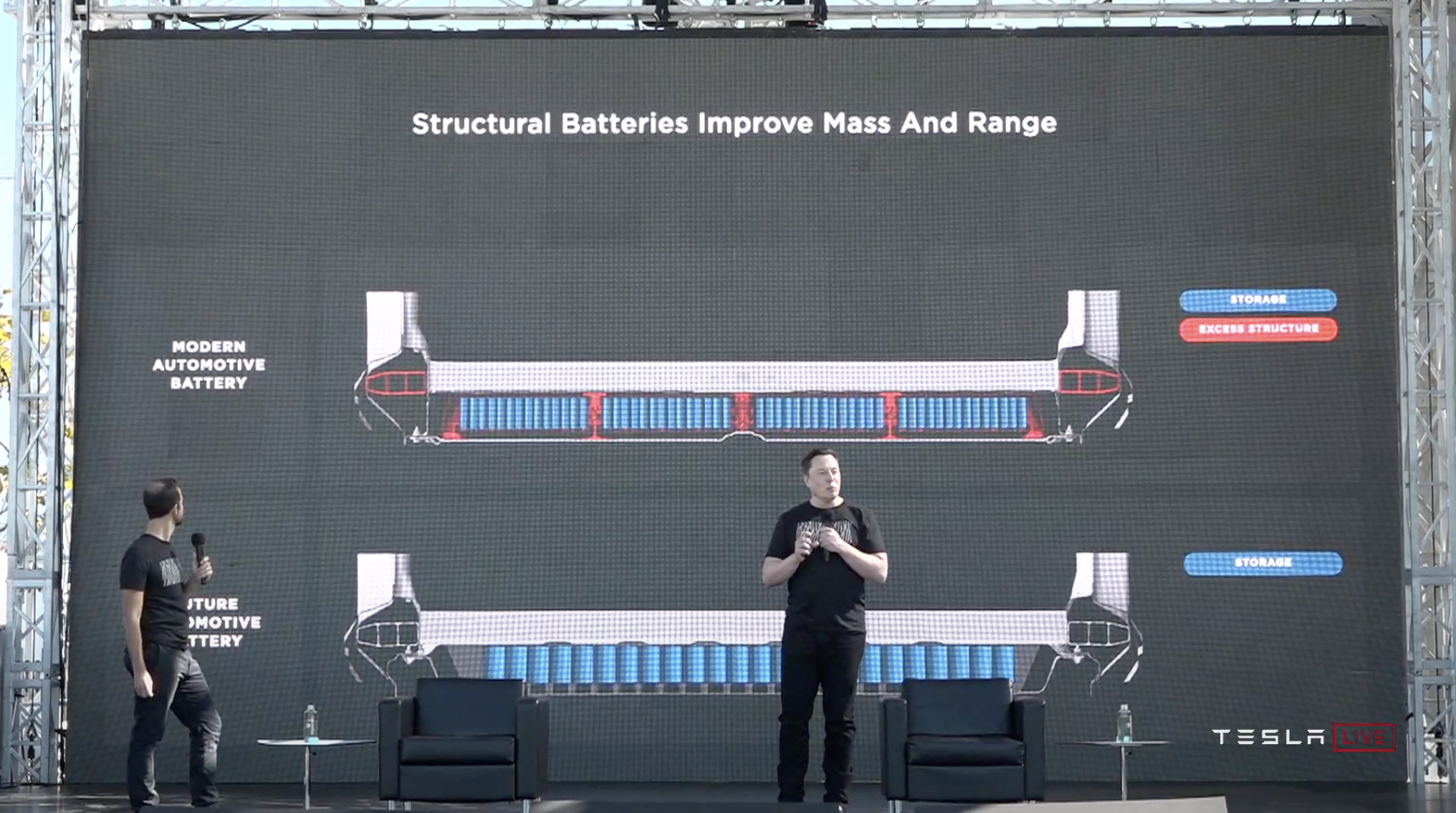 Tesla outlines its ideas for the Structural Battery Pack

Tesla’s Battery Day detailed a variety of topics that are related to the future of cell manufacturing efficiency. However, the presentation also showed how the automaker is improving the design of its vehicles by utilizing a new battery architecture. Tesla plans to adopt the same strategy within its vehicles to improve mass, range, and the structural integrity of its vehicles.

Teslarati reported earlier this year that Tesla would be using a single-piece casting design on the Model Y. The improved casting eliminates 79 parts per car, which not only increases manufacturing efficiency but also increases safety for drivers. The cost of each vehicle’s rear underbody design also decreases by 40% thanks to the casting, which is performed by a massive machine known as the Giga Press.

The single-piece rear casting is made from Tesla’s own high-pressure aluminum alloy that has a high strength thanks to no heat treatment or coatings that would take away from the structural integrity of the design. Heat treating a casting of this size after manufacturing causes deformation, CEO Elon Musk said during the event.

However, the manufacturing team at Tesla also drew inspiration from aircraft wings to improve the structural integrity of its vehicles. While the casting improves manufacturing efficiency and strength, the positioning of structural batteries eliminates excess structure from the battery packs, increasing density.

The minimization of negative mass allowed the automaker to increase the density of the battery pack. Individual cells could be positioned more efficiently because excessive structures within the pack itself were eradicated. The new Tesla battery design is completely free of any negative mass, which improves pack density along with structural integrity.

“The pack itself is structural,” Musk stated.

Additionally, the filler within the Model 3 and Model Y packs, which currently uses a flame retardant, now uses a structural adhesive and flame retardant. This adhesive effectively attaches the cells to the top and bottom sheets of the pack. “This allows you to do sheer transfer between the upper and lower sheet,” which increases stiffness and prevents major deformation in the event of a crash.

Improvements in the casting design of Tesla’s future cars and the newly designed battery architecture, which uses new materials and strategies to increase stiffness, will increase the already safe vehicles that the company manufactures. Tesla already holds three separate five-star crash safety ratings with the Model S, Model 3, and Model X. The Model Y has not yet been tested, but the vehicle does use the one-piece rear casting design already at the Fremont production facility.

Tesla’s Battery Day did not disappoint. While the blueprint to cell manufacturing efficiency was laid out, the company also showed how battery layout and architecture could increase Tesla’s vehicle safety. The new design revolutionizes EVs as a whole and will eventually lead to more safety than previously displayed.

Tesla outlines its ideas for the Structural Battery Pack