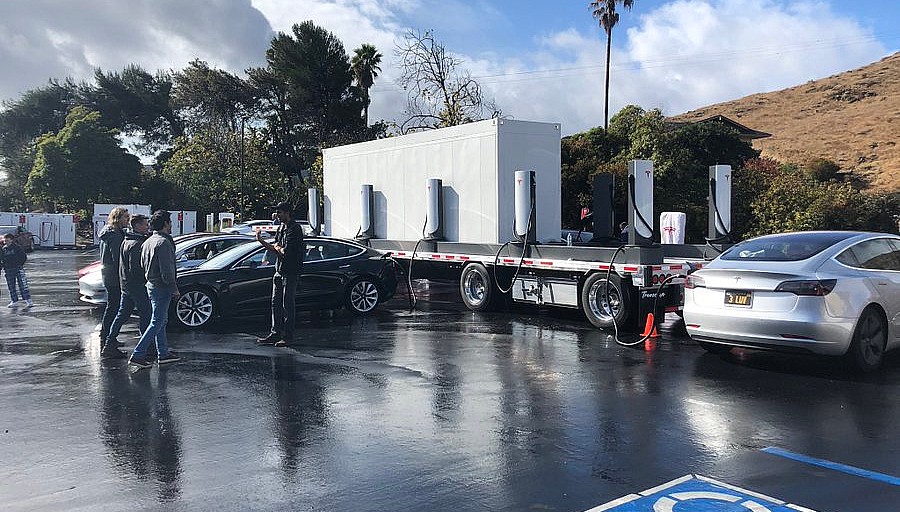 Tesla may just have figured out the perfect way to bolster its charging infrastructure during the holidays, a time when more drivers are taking long trips and relying on the company’s Supercharger Network. Based on images and videos captured by the Tesla community, it appears that the electric car maker has started deploying Mobile Supercharger units that are powered by Megapack batteries, which are then installed on a trailer.

This setup allows Tesla to instantly add more charging stalls at a specific location. One of these Megapack-powered chargers was spotted in San Luis Obispo (SLO) at the Madonna Inn Supercharger. Looking at the photographs of Tesla’s setup from EV enthusiast Brian Swenson, the Megapack appears to be hooked up to eight Urban Supercharger stalls that are set up on the trailer itself.

Quite interestingly, the Mobile Supercharger stalls are reportedly capable of providing up to 125 kW of dedicated power. This makes them comparable to the previous output of Tesla’s V2 network before it was improved by the electric car maker to allow peak charge rates of up to 150 kW. Regardless, 125 kW is not inconvenient at all, especially for drivers who wish to take a coffee break in the middle of a long drive.

The deployment of Tesla’s Megapack-powered Mobile Superchargers holds a lot of potential for the company. Such solutions, after all, are perfect for events such as concerts, sports events, and even calamities such as fires and hurricanes. Even if the grid were to go down unexpectedly, Tesla would be able to deploy a mobile charging system to owners across the country. This, of course, would most certainly benefit Tesla owners all over.

Tesla’s Megapack-powered Mobile Supercharger units will likely be more and more helpful in the coming quarters, particularly as the company starts delivering its most high-volume vehicle to date: the Model Y crossover. Once that vehicle is on the market, there is a very good chance that even Tesla’s expansive Supercharger Network would be utilized to its limits just to meet the demand from Model 3 and Model Y owners. During such instances, the Megapack-powered Mobile Superchargers would definitely be an ace for the company.