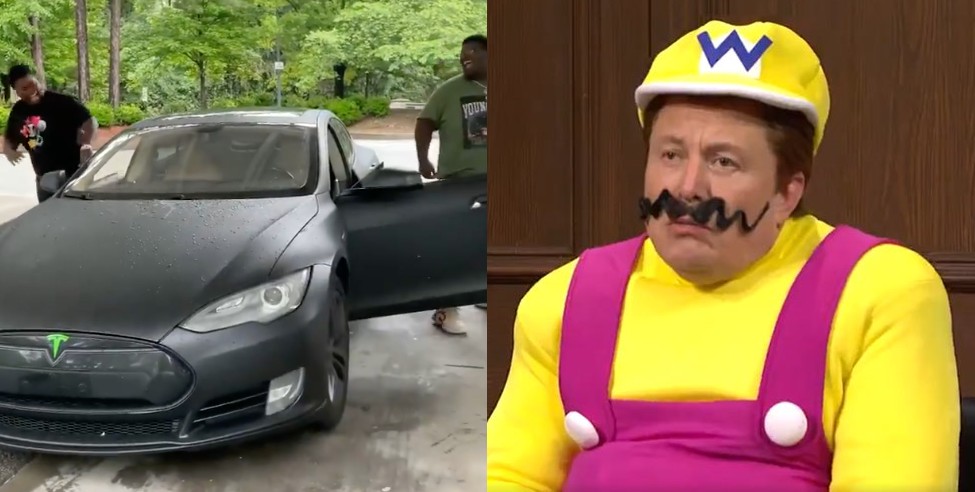 With memes being the preferred language of the internet and with the United States East Coast recently experiencing a gas crisis, it was almost inevitable to see EV fans using Tesla memes and jokes to make a point and perhaps even win over some fossil fuel supporters. Over the past few days, and as the lines of cars in gas stations got longer, memes about “Tesla owners during a gas crisis” became more widespread and creative.

The thesis of the Tesla memes was straightforward. Gas cars need fossil fuels to run, so when the supply of gas is compromised, said vehicles could not run. This results in panic buying for some car owners. Over the past days, images of people siphoning gas off one car into another, as well as people storing fuel in plastic bags, inspired lots of raised eyebrows and laughs among netizens.

Tesla owners simply do not have such problems. Thanks to their vehicles being powered by electricity, Tesla owners could simply charge their cars from their homes, just like their smartphones. Owners who have solar panels installed in their houses are even better off since not only can they run their cars, they can do so using literal sunlight. Needless to say, these EV advantages became an excellent source for memes online.

Apart from memes, short, funny videos highlighting Tesla owners during the ongoing crisis also made the rounds online. A couple of friends in a Model S who visited a gas station convenience store during the gas shortage proved immensely popular with over 115,000 likes on Twitter. Even the hosts of the Holderness Family Vlogs channel on YouTube got involved (albeit inadvertently) by sharing a skit of how Tesla owners are, particularly at a time when gas is scarce.

In the case of the YouTuber, the intended jokes about Tesla owners became all too real and ironic, as the host of the channel revealed that his personal vehicle, a gas car, was actually in need of some fuel. But with the fuel crisis ongoing, it was tough to get some gas. With that in mind, the host noted that he should probably just keep borrowing a friend’s Tesla, which could operate without any issues despite the fuel shortage.

Everyone with a @Tesla during the current gas crisis. 😄 pic.twitter.com/Pux066H4uV

Memes and funny videos may be used mostly for harmless fun, but there is no denying that they do work. Tesla CEO Elon Musk knows this, and this is one of the reasons why he himself dabbles in a lot of memes and humor. A look at the comments and threads of posts on Twitter about EVs operating fine in the fuel crisis also shows conversations and debates about the benefits of electric cars, hinting that a growing population is becoming more aware of EVs and their advantages. Ultimately, within the brought photos and the loud videos of the past few days, a notable narrative was being pushed—Tesla owners feel great during a gas shortage, and if you get an EV, you can feel the same way too.

Watch the Holderness Family’s video about Tesla owners in a gas shortage in the video below.