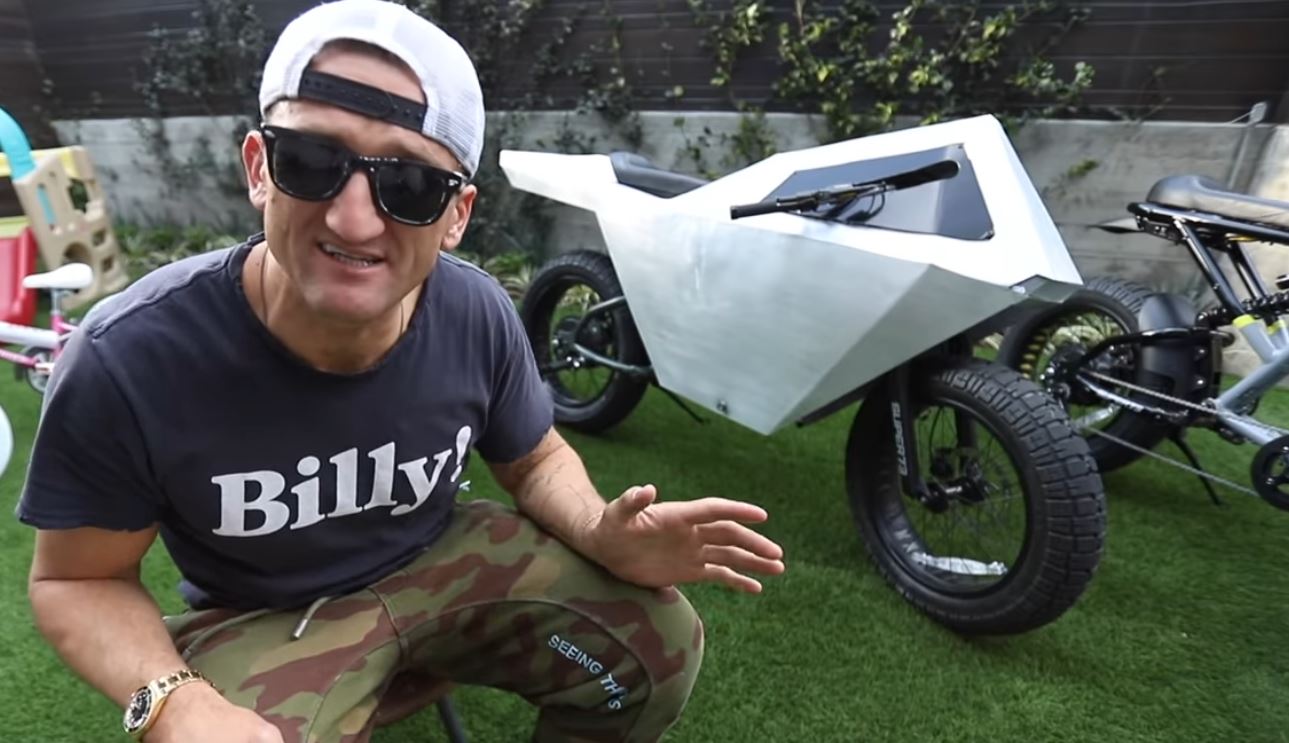 Casey Neistat, with 11.9 million followers on YouTube, showcased an electric CyberBike that features the same dystopian look of Tesla’s Cybertruck but unlike the latter that’s made of ultra-hard 30x cold-rolled stainless steel, the CyberBike is a  made of aluminum.

The Cybertruck-like exoskeleton is actually a camouflage shell for the Super73 electric motorbike that Neistat is testing, and the team from Super73 helped him build the CyberBike “because he cannot wait for the Cybertruck.”

“…while you can ride the CyberBike, you can’t ride it that well especially when you have to make a turn. See we had to get the handlebars and stick them out of the CyberBike’s windows that make it almost impossible to steer,” Neistat explained.

“See Super73 is this electric bike company and have this dope new bike coming out and they wanted me to test it but we needed a way to test it where other people wouldn’t be able to see the bike cause it wasn’t finished yet,” he explained.

The online celebrity who rose to fame during the early vlogging days of YouTube is also a known Tesla fan. Last year, Neistat drove his Model X from New York to Los Angeles. He was also given exclusive access by the electric carmaker when the Model 3 came out.

Just like the much-awaited all-electric pickup truck, Neistat gave the Cyberbike a controversial unveiling by throwing something onto the bike with matching glass-breaking sound effects.

He tested the eye-catching CyberBike on the road and just like the Tesla Cybertruck, it did not disappoint.

Onlookers threw him praises such as “that bike is fresh” or “that bike is dope” and of course, he wasn’t able to avoid curious bystanders taking snapshots of the Cyberbike.

In place of the huge truck bed of the Cybertruck that can be used for Camp Mode, Neistat’s Cyberbike features a 3D-printed plastic insert that has enough space for a six-pack beer.

The YouTube celebrity described the electric bike to be janky, hard to drive and not particularly safe but admitted that the team at Super73 had a difficult time building the tribute bike. He shared how they designed the body on cardboard before putting several panels of aluminum together to make a unibody that looks like the Cybertruck.

Unlike the Cybertruck that was recently spotted while filming a segment for Jay Leno’s Garage, the last segment of the world’s first Tesla CyberBike video involves a police officer flagging Neistat down. There was no cause for concern it seems, and the celebrity YouTube cruised along the beachfront.

For sure, Elon Musk will have a blast seeing the CyberBike by Neistat and Super73. He could even let the Neistat use his latest EDM track “Don’t doubt yer vibe” in a followup video.

Check out the video below featuring the CyberBike: