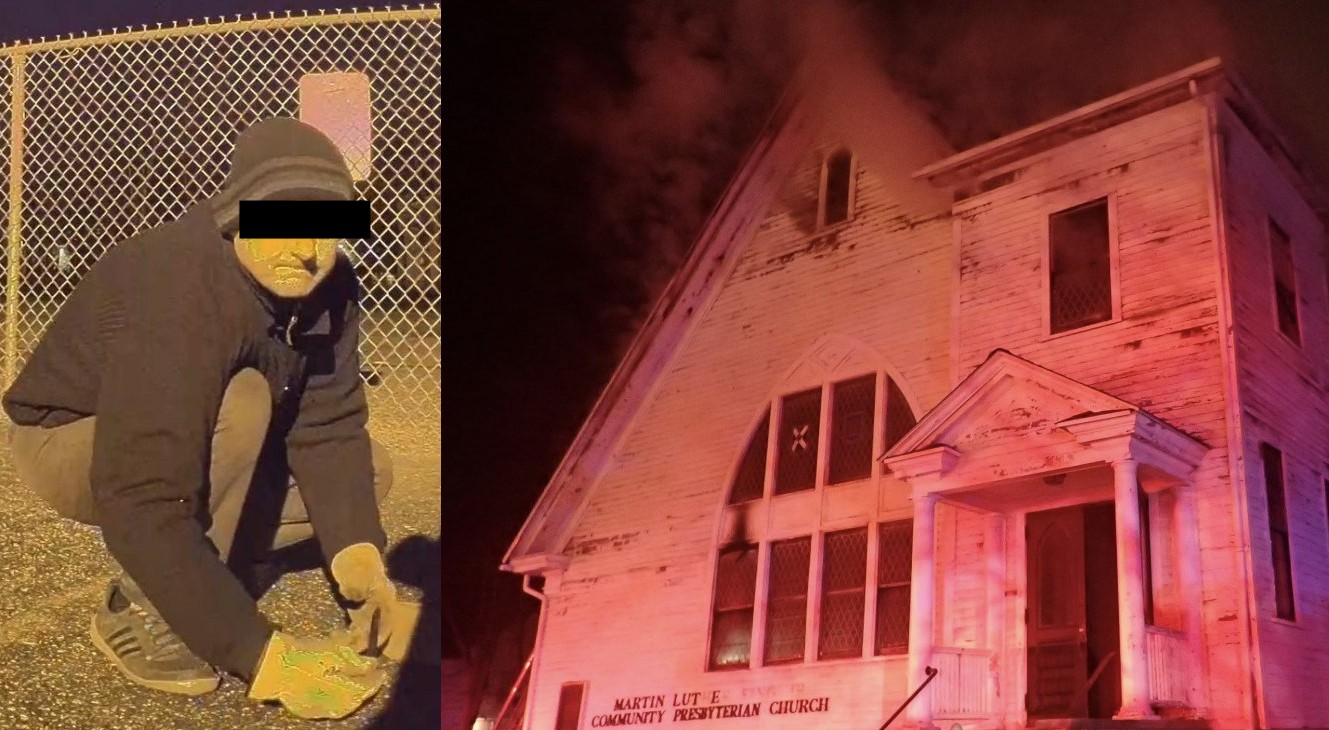 It appears that some members of the Federal Bureau of Investigation (FBI) are now becoming familiar with Tesla’s built-in security features like Sentry Mode, which allows vehicles to record videos from their cameras to actively monitor their surroundings. This was undoubtedly the case in an incident back in December, which involved slashed tires, arson, and what appears to be a racially motivated attack against a church.

In an affidavit dated April 15, 2021, FBI Special Agent Casey Anderson outlined the events that led to an incident that resulted in the destruction of the Martin Luther King, Jr. Community Presbyterian Church in Springfield, Massachusetts. The suspect behind the incident, 44-year-old Maine resident Dushko Vulchev, is a naturalized United States citizen from Bulgaria. As per the FBI agent’s affidavit, Vulchev had previously run afoul of the law prior to his apparent arson in December, having been convicted of threatening a foreign official in 2015 and a series of offenses such as domestic violence assault in 2017. 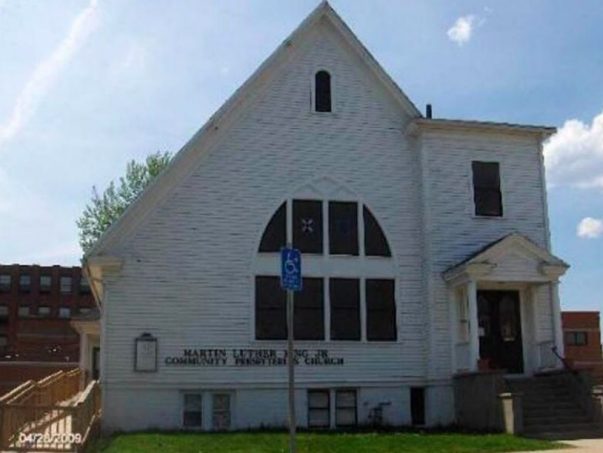 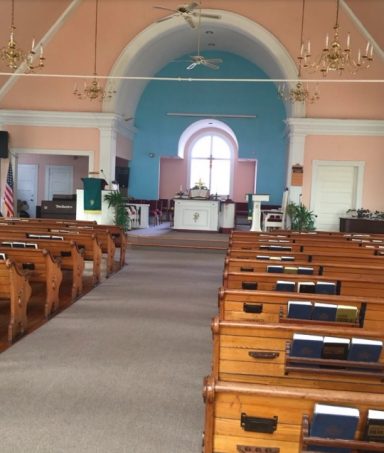 In December 2020, the MLK Church experienced a series of fires, one of which eventually destroyed the whole building. The first of these fires were reported on December 13, when the fire department was deployed to extinguish a blaze behind the church. On the same day, a vehicle had its tires slashed two miles away from the church. The next day, a BMW about 1.5 miles away from the MLK church and a Tesla parked less than a mile away from the church had their tires slashed. In the case of the Tesla, its owner found that one of the vehicle’s wheels was also missing.

Another fire behind the Martin Luther King, Jr. Community Presbyterian Church was set on December 15, 2020, at around 6:32 p.m. The Springfield Police Department (SPD) Arson and Bomb Squad investigated the fire and promptly determined that the blaze had been intentionally ignited. Interestingly enough, another fire in the church was reported at 11:03 p.m. that same day. Upon investigation, the SFD reported that the blaze had been “intentionally set to eventually involve the structure” of the church.

Things essentially calmed down until December 27, when a Dodge Charger had its tires slashed just 400-500 feet away from the MLK Church. At around 5:06 a.m. the next day, the American International College campus police reported a new blaze at the MLK Church. This time, the fire was started just outside the basement side door, where it burned through and up through the church’s main floor. The blaze essentially destroyed the church, and upon investigation, the SPD concluded that the fire was intentional. 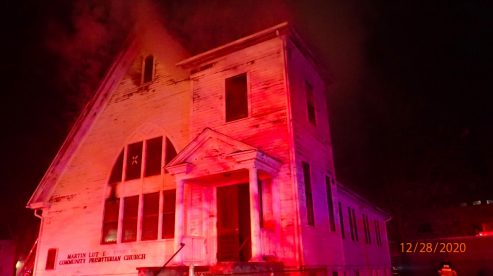 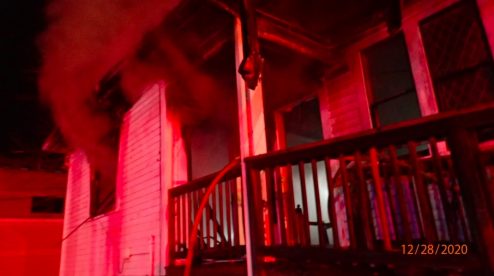 Photos of the MLK Church during the December 28, 2020 blaze. (Credit: CourtListener)

Investigators working on the case were able to obtain several video footage relevant to the case. In the first tire slashing incident on December 13, footage from the City of Springfield recorded a gray Chevy Cruze pulling up into the same parking lot as the vehicle that was attacked. The car was found to have been registered to the suspect, Vulchev. City video footage captured the suspect crossing the street in the direction of the MLK Community Center later that day. The gray Chevy Cruze was also recorded circling the MLK Church.

Vulchev’s Chevy Cruze was sighted by city video footage once more the next day, when the BMW tire slashing incident transpired. As per the FBI agent’s affidavit, a while male matching Vulchev’s height, gait, and clothing, was spotted approaching the BMW. Later that day, a Tesla became the next victim of the suspect’s tire slashing tendencies. But this time around, the special agent didn’t just have a faraway shot of a man approaching a vehicle. This time around, authorities were able to get a clear shot of Vulchev as he was slashing and stealing the Tesla’s tires and stealing a wheel, thanks to Sentry Mode. Tesla’s built-in cameras even captured the suspect putting the stolen goods inside his trunk.

Special Agent Casey Anderson related his experience with Teslas and their built-in cameras in his affidavit. “Based on my training and experience and this investigation, I am aware that the Tesla referenced above is equipped with cameras at various points around the body. ATF Special Agent Marc Maurino (“SA Maurino”) and I have reviewed video footage retrieved from the Tesla showing an individual that I can identify as Vulchev, based on my observation of Vulchev during the Vulchev PPD Interview.

“The video footage from the Tesla shows Vulchev at a close distance crouching near the Tesla and using a tire iron to remove the wheels. Additional Tesla video footage captured Vulchev removing one of the Tesla’s wheels and placing it in the trunk of Vulchev’s car. Vulchev’s face is clearly visible in the video. Vulchev was wearing grey pants and a dark-colored sweatshirt, Adidas three-stripe sneakers, a black hat with two grey stripes, and light-colored work gloves, the agent noted in his affidavit.

Vulchev and his vehicle were spotted around the MLK Church fires, as well as subsequent tire slashing incidents. 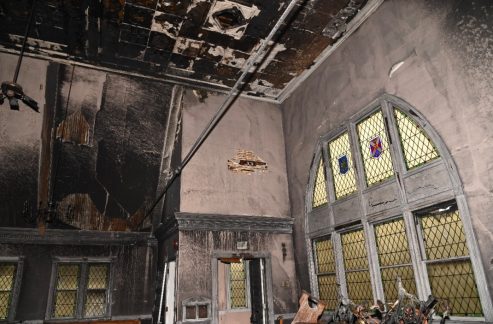 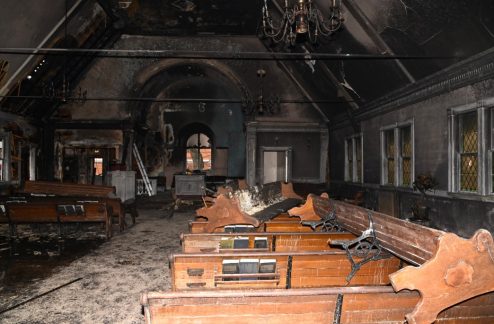 The MLK Church after the December 28, 2020 fire. (Credit: CourtListener)

On December 30, 2020, a complaint about a vehicle driving erratically was reported to authorities. When provided with the license plate of the vehicle in question, it was determined that the car was Vulchev’s. Police stopped the suspect’s vehicle on suspicion of erratic driving and possible links to the multiple tire slashing incidents. Since they were aware of the ongoing federal investigation into the fires against MLK Church, local authorities promptly contacted FBI Supervisory Special Agent of the Springfield Resident Agency Matthew Fontaine.

Special Agent Fontaine arrived at the scene of the stop, and upon initial investigation, the FBI agent noted that the suspect may have been living in his car for some time. The FBI agent spoke with the suspect for about eight minutes outside, and immediately, Fontaine noted that Vulchev was wearing the sneakers that were captured clearly by Tesla’s Sentry Mode. PPD officers initially released the suspect, though he was arrested the day after over his links to the multiple tire slashing incidents and the Martin Luther King, Jr. Community Presbyterian Church fires.

On January 4, 2021, the FBI and ATF conducted a search of Vulchev’s vehicle, where they found a computer, a hard drive, and several USB storage devices. A search of the computer revealed Vulchev’s shocking racially charged stance against non-white people. This was seen in messages to an ex-girlfriend—who currently has a lifetime protective order against Vulchev—which featured numerous slurs against Muslims and blacks. Vulchev’s apparent hate against non-whites was notable, as seen in a message to his ex-girlfriend where he was complaining about the race of ABC’s The Bachelorette. A search of the suspect’s phone revealed photos of several notable items, such as a firearm, an image of Adolf Hitler in an Adidas tracksuit, and a “White Lives Matter” mural, as well.

With these in mind, FBI Special Agent Casey Anderson noted that there is probable cause to believe that Vulchev committed damage to religious property, which is in violation of 18 USC §§ 247(c) and (d)(3), and the use of fire to commit a federal felony, which is in violation of USC § 844(h)(1). As per a press release from the US Department of Justice, Vulchev is currently in state custody and is due to make an initial appearance in federal court in Springfield at a later date.