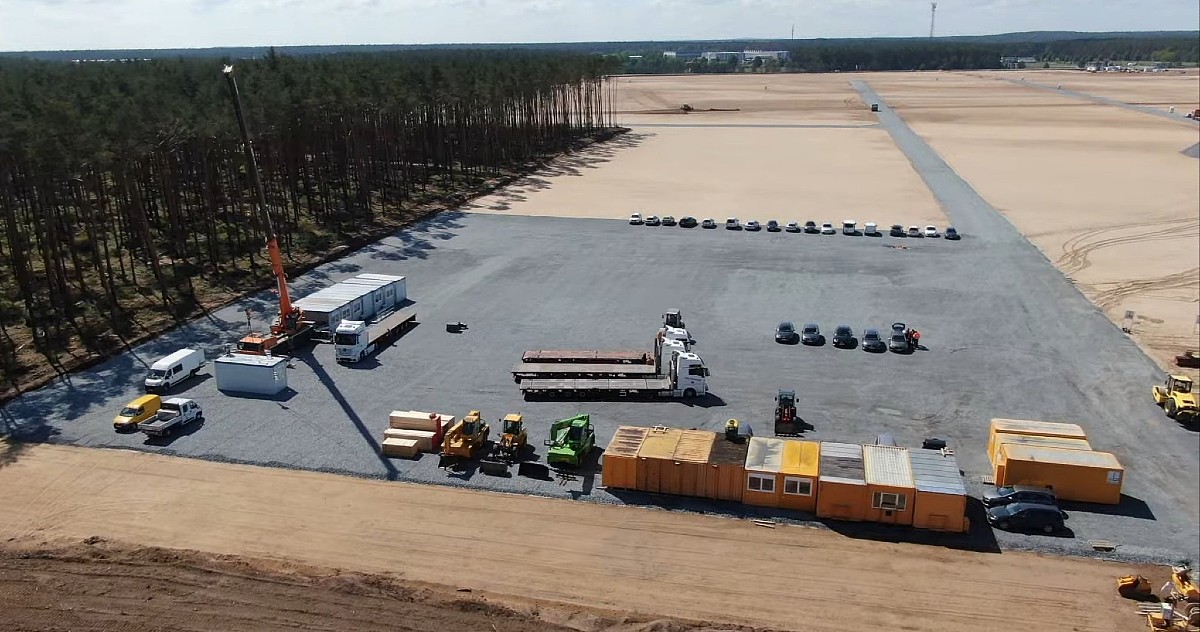 Tesla’s Giga Berlin site is beginning to show some hints that a potential groundbreaking event may be taking place sooner than expected. Recent photos of the Gigafactory Berlin complex reveal that construction crews are seemingly preparing to set up the initial stages of the Model Y facility by performing several tests on the site.

A Tweet from @Gf4Tesla indicates that crews are preparing for a load test to make sure the area’s ground is stable and ready for foundation work. Several heavy equipment are at the Giga Berlin site maneuvering large pieces of structural steel on a large expanse of what appear to be gravel.

Load testing helps create confidence for construction crews. The results of the tests can indicate whether the property is deteriorating or under severe stress, which could cause long-term issues after a structure is built.

-The test piles are prepared for a load test.
-more containers have been placed.👷‍♂️
-Geoglyphs are being drawn in the sand.😉

Waiting for the starting signal….📑

Containers and small trailers are also now present on the Gigafactory Berlin complex. Containers can be used for storing materials, protecting them from the elements. The trailers are where the site’s superintendents will stay during work hours.

Earlier this month, construction crews placed its first pile driver on the Giga Berlin area, hinting at an upcoming groundbreaking event in the near future. Pile drivers provide foundational support for buildings or structures.

With the addition of load tests being performed at the site, Tesla seems to be prepared to begin the foundational work of Giga Berlin so it can start construction on the planned Model Y facility as soon as possible.

Today the concrete of the piles at #GigaBerlin has been cut down in preparation for load tests.

Also a lot of new gravel is getting delivered to the west of the construction site. pic.twitter.com/KdDVzSuJ7D

Crews have been working since the first days of 2020 to prepare the land for the eventual German production facility that is expected to employ 12,000 workers. Despite delays from COVID-19 and some concerns from local citizens that needed to be heard, Tesla remains on schedule.

The first vehicle that will be built at Giga Berlin is the Model Y. The all-electric crossover is not yet available for European region for now, as the ramp of the vehicle is still focused on North America.

It is currently unknown whether the groundbreaking event of Gigafactory Berlin will become an event that Tesla will host. Initially, a groundbreaking event was planned for late March, but the COVID-19 pandemic halted any possibility of that happening due to social distancing measures.