Tesla’s Gigafactory Shanghai expansion is well underway, paving the way for a potential local Model Y ramp sooner than expected. As per recent drone footage recorded from the GF3 site, the facility’s Phase 2A area, widely considered to be allotted for the Model Y line, is coming to life.

Tesla enthusiast and drone operator Wuwa Vision recently conducted a flyover of Giga Shanghai to document the status of the site as of April 15. Based on the video, the steel beams that make up the outer framework of the Phase 2A building are nearly all in place. Initial roofing is even underway in some sections of the ongoing buildout.

In late March, drone footage from Tesla enthusiast Jason Yang revealed that the construction in the Phase 2A area was just starting. Significant progress has been made since then, as depicted in the two pictures below. Take note that the images were taken less than three weeks apart. 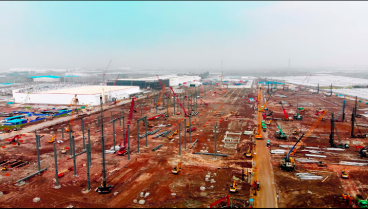 Being a massive facility, Tesla’s Gigafactory Shanghai is being built in several sections. Phase 1, which was completed last year, is allotted for the Model 3 production line. Another seemingly finished area, Phase 1.5, is reportedly set to become a battery and powertrain facility. The Phase 2 zone is extremely large, and is split into two areas, widely dubbed in the Tesla community as Phase 2A and Phase 2B.

The exact purpose of the Phase 2A area has not been revealed by Tesla, though signs point to the site being utilized for Model Y production. Phase 2B, on the other hand, is still up for speculation. So far, the ongoing buildout is focused on the Phase 2A area, while the pace of Phase 2B is more restrained. As per recent drone footage, pile drivers are still operating on the Phase 2B site.

Giga Shanghai has managed to reach a run rate of 3,000 vehicles a week, but Tesla will need increase its capabilities to keep up with the demand that has come about in China. While COVID-19 has slowed the Chinese automotive industry by nearly 50%, Tesla has managed to avert the slowing economic downfall that has come with the virus’ presence. In February, only 2,314 Tesla vehicles were registered in China. This number soared more than four times in March to 12,709 total registrations for the electric car company.

Tesla’s expansion of the Giga Shanghai plant will help address the country’s demand for high-performance electric vehicles. Now that Tesla plans on offering additional variants of the Model 3, more production capabilities will be needed. This is especially true since Tesla China is poised to release the Model Y, which will compete in the country’s lucrative crossover market.