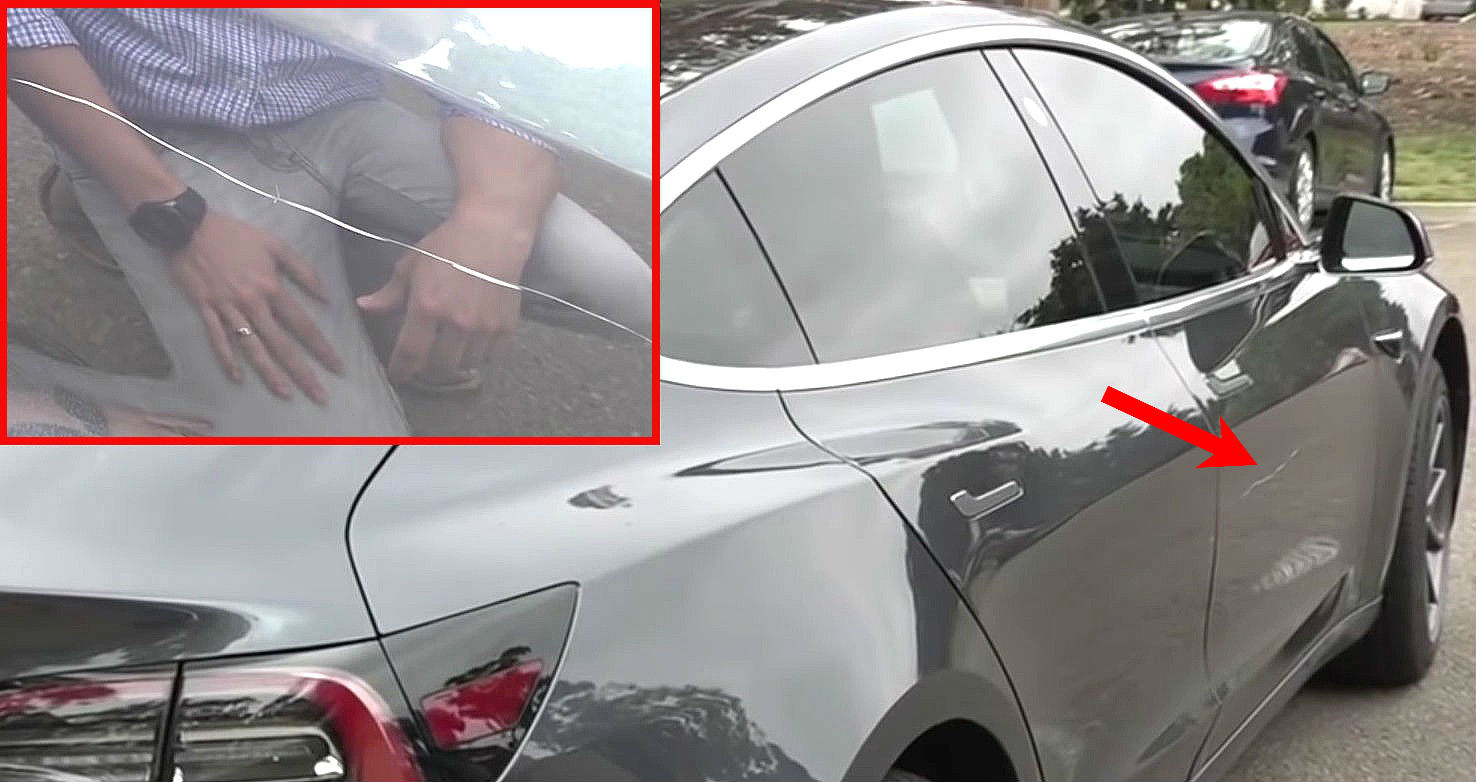 A Tesla owner had no idea that his Model 3 will be the victim of a road rage incident after he encountered a BMW in a parking lot at Carmel Mountain Ranch in San Diego, CA. The incident, which transpired after the Model 3 owner briefly called out the BMW driver, resulted in what could very well be some costly repairs for the electric sedan.

Cory Janney and his wife were doing a simple run to a Best Buy outlet at The Courtyard shopping center last Saturday when they passed a gray BMW, which pulled through a stop sign just as the Tesla Model 3 was pulling in. Janney pressed on his vehicle’s horn briefly in response. Thinking nothing of the incident, the couple then parked their electric car and went inside the store.

They were only inside for around six minutes, but by the time they returned to their Model 3, they were greeted by paint shavings on their vehicle and a long, deep gash across the electric car’s front passenger side door. Speaking to ABC10 News, Janney noted that he and his wife did not expect their vehicle to get attacked from such a brief, seemingly normal parking lot encounter. “We were both pretty shocked,” he said.

Reviewing the dashcam footage from their Model 3, Janney and his wife saw what appeared to be the very same BMW that they encountered park beside their Tesla. The BMW driver then exited his vehicle and looked around, seemingly surveying the area and checking if he parked beside the right electric car. When he went back into the line of sight of the Model 3’s dashcam, the BMW driver had something small and sharp in his hands. He then proceeded to walk towards the Model 3’s passenger side. “He had a stiff arm and proceeded to scratch the passenger side of the door, before getting back into the vehicle,” Janney said.

The damage to the Model 3’s paint was quite significant, as the scratch was deep enough to go past the vehicle’s clear coat and paint. The Model 3 owner has not received an estimate for his vehicle’s repair yet, though a consultant informed ABC10 that the scratch could cost the Tesla owner several thousand dollars. Fortunately, a police report has been filed against the BMW driver, whose face was clearly visible in the Model 3’s dashcam footage. And since incidents such as these are considered a felony in the area, the BMW driver might soon regret attacking the Model 3.

Janney, for his part, hopes that the road-raging BMW driver could be located by the authorities soon. “It’s disturbing (that) something so small could lead to so much rage. If he gets this frustrated, who knows if he’s going to escalate it to something bigger,” he said.

Teslas are becoming a lot more common today with the advent of vehicles like the Model 3. Despite this, the company remains polarizing for several groups of people, some of whom seemed to have developed a strong dislike for Teslas and their infrastructure. This has been displayed in ICE-ing incidents, which involve gas-powered cars intentionally blocking EV charging stations, and even an instance involving a vandal who attempted to sever the wires of a Tesla Supercharger. In response to these, Tesla has rolled out several safety updates for its vehicles, such as improvements to its fleet’s built-in dashcam features and Sentry Mode, an upgraded alarm suite designed to discourage thieves from breaking into an electric car.

Watch ABC10‘s feature on a Tesla Model 3’s unfortunate encounter with a road-raging BMW driver in the video below.