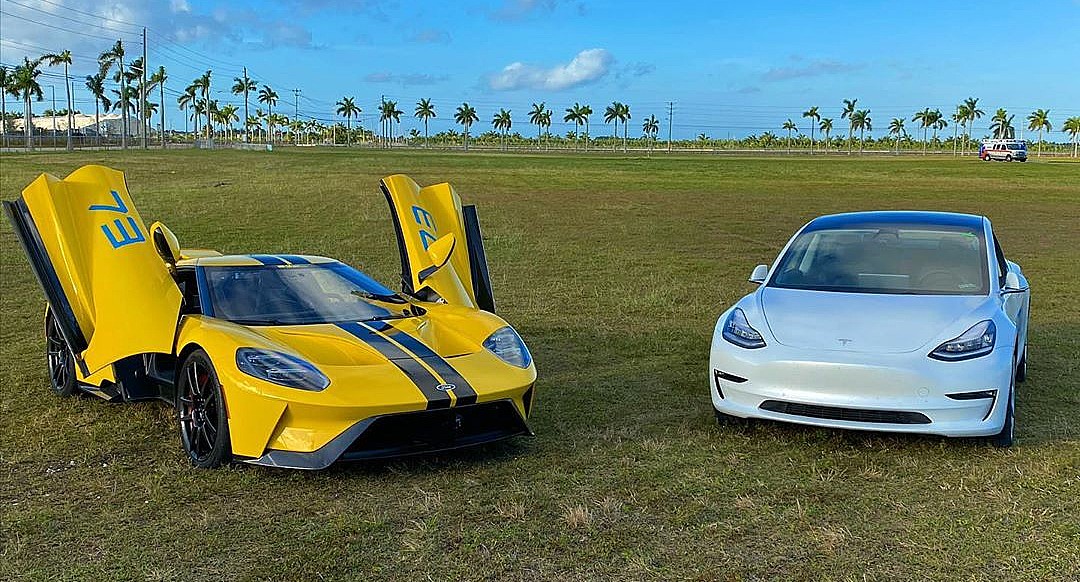 Among Tesla’s lineup, the Model S Performance is the resident quarter-mile supercar killer. The Tesla Model 3 Performance is quick, but it is designed to take down vehicles like the BMW M3, not supercars like the Ford GT. Yet in a recent video from YouTube’s DragTimes, the Model 3 showed that it has what it takes to give the Ford GT a pretty good challenge, both in an autocross course and in a straight-line race.

Brooks Weisblat, the host of the Youtube channel, actually sold his 2018 Ford GT recently. But even with the car gone from his garage, the DragTimes host decided to share some of his sessions with the American-made supercar. One of these involved an autocross run and straight-line race against the Tesla Model 3 Performance, a midsize sedan that should, for all intents and purposes, be overcome by the Ford GT without any problems.

The Ford GT, after all, is the flagship vehicle of the veteran American automaker. Designed from the ground up to be a mighty force on the track, the 2018 Ford GT carried over all the pedigree of its predecessors, which soundly humbled supercar titan Ferrari in the 1966 Le Mans by finishing first, second, and third in the legendary race.

As noted by Brooks, he has been interested to see how the Ford GT could perform in an autocross, seeing as the events usually involve tight courses. The Ford GT was a pretty big and wide car, but based on its runs, it was able to take the tight twists and curves of the course pretty well. Ultimately, Brooks noted that his best time in the GT’s autocross sessions stood at 52.8 seconds.

The Model 3 Performance, with its all-season tires and Track Mode Version 1, was able to complete a run in a very respectable 53.2 seconds. This is impressive for the Model 3, seeing as the Tesla is a midsize sedan that’s designed as a people hauler that just happens to be really fast. The Model 3 Performance is also a fraction of the GT’s price, so its 0.40-second time deficit against the supercar in the autocross course was not too bad at all.

The real surprise in the recent video came after the autocross sessions. In classic DragTimes fashion, Brooks opted to drag race the Ford GT against the Model 3 Performance. During both runs, the Model 3 commanded an early lead against the supercar, thanks to its instant torque. In a way, there is just something satisfying about seeing a supercar getting smaller behind the rear of an electric car in a drag race, especially if that vehicle is a Model 3.