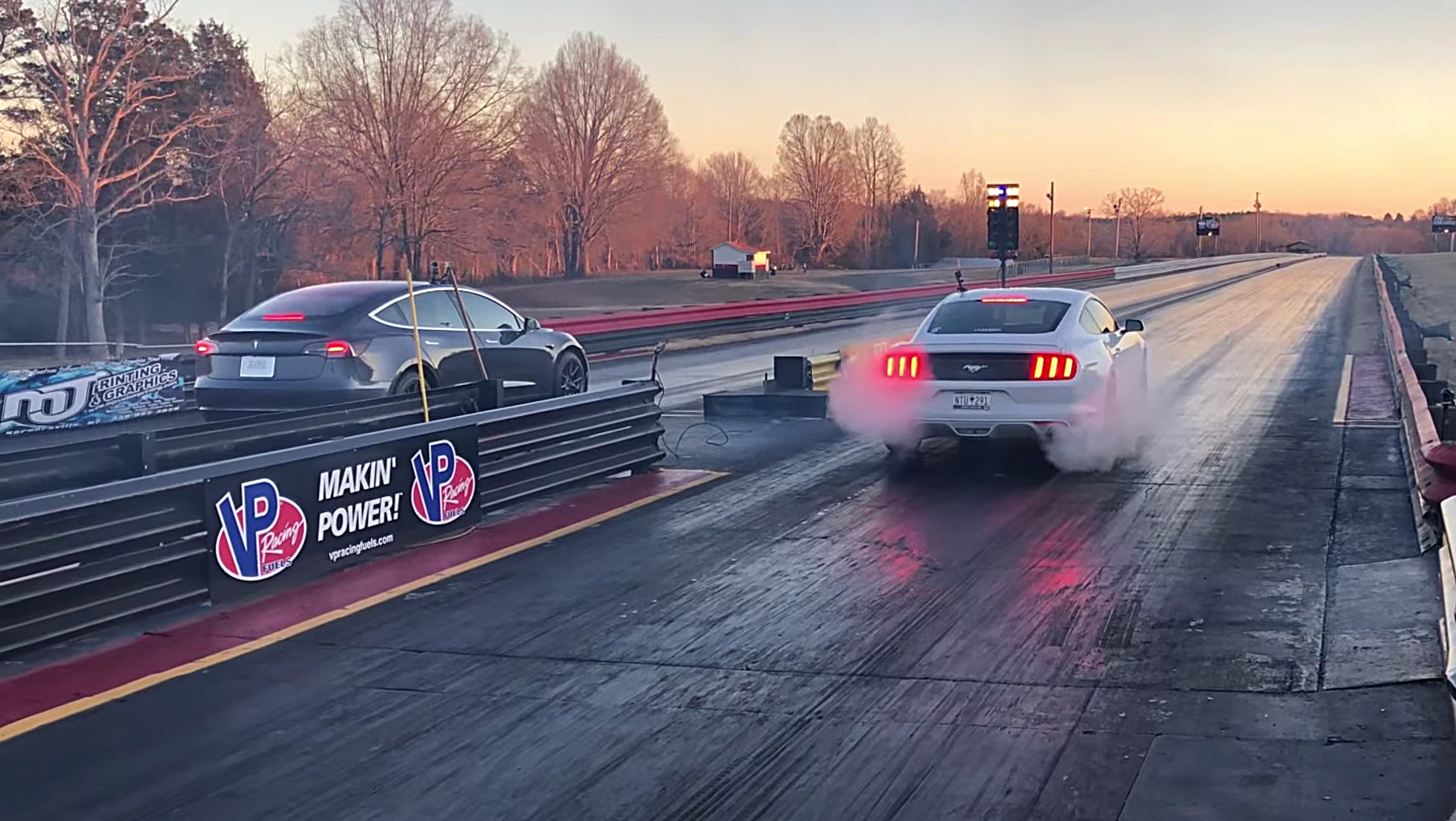 Following a recently posted video of a Tesla Model 3 drag racing against a Model S 75D, and a modified P100D, Brian Jenkins posted yet another Model 3 drag racing video, this time featuring the compact electric car doing battle against a 2017 Ford Mustang with Ecoboost in a 1/8-mile run. The results, as it turned out, were in the Model 3’s favor.

Jenkins uploaded the Model 3’s latest feat on his YouTube channel, i1Tesla, where he described the conditions that preceded the race. According to Jenkins, the Model 3 in the clip had been doing runs in the drag strip all day in 23-degree weather, significantly reducing the battery charge of the compact electric car.

By the time the Model 3 ran against the 2017 Ford Mustang with Ecoboost, Jenkins estimated that the Long Range Model 3 in rear-wheel drive configuration was at a 50% state of charge. Posting on the r/TeslaMotors subreddit, however, u/siege342, the owner of the Model 3 in Jenkins’ clip, stated that the car had exactly 65% battery left. Despite this, the compact electric sedan was able to give the American muscle car a good fight, and then some.

As could be seen in Jenkins’ recent YouTube video, the Model 3 got the jump at the light, before extending its lead on the Ford. By the time the 1/8-mile race was done, the Model 3 was 0.60 seconds ahead of the all-American classic, finishing the run at 8.7 seconds compared to the 2017 Mustang’s 9.3 seconds. The Tesla also registered a trap speed of 81.79 mph versus the Ford’s 77.23 mph.

While the performance of the Model 3 was admirable, however, some members of the r/TeslaMotors subreddit noted that the 2017 Ford Mustang with Ecoboost was not a formidable opponent at all. After all, as noted in Edmunds.com’s review of the vehicle, the Ecoboost Mustang is equipped with a 2.3-liter, four-cylinder turbo engine that generates 310 hp to its rear wheels. This allows the muscle car to hit 0-60 mph in an impressive 5.6 seconds.

The Tesla Model 3, on the other hand, is equipped with a reported 80.5 kWh battery pack that enables the vehicle to travel up to 310 miles on a single charge. As noted in a previous Teslarati report, an EPA document revealed that the Model 3 has a rated 258 hp. Tesla also quotes the long-range RWD configuration of the Model 3 to hit 0-60 mph in 5.1 seconds, thanks in part to the instant torque delivered by the vehicle’s electric motor.