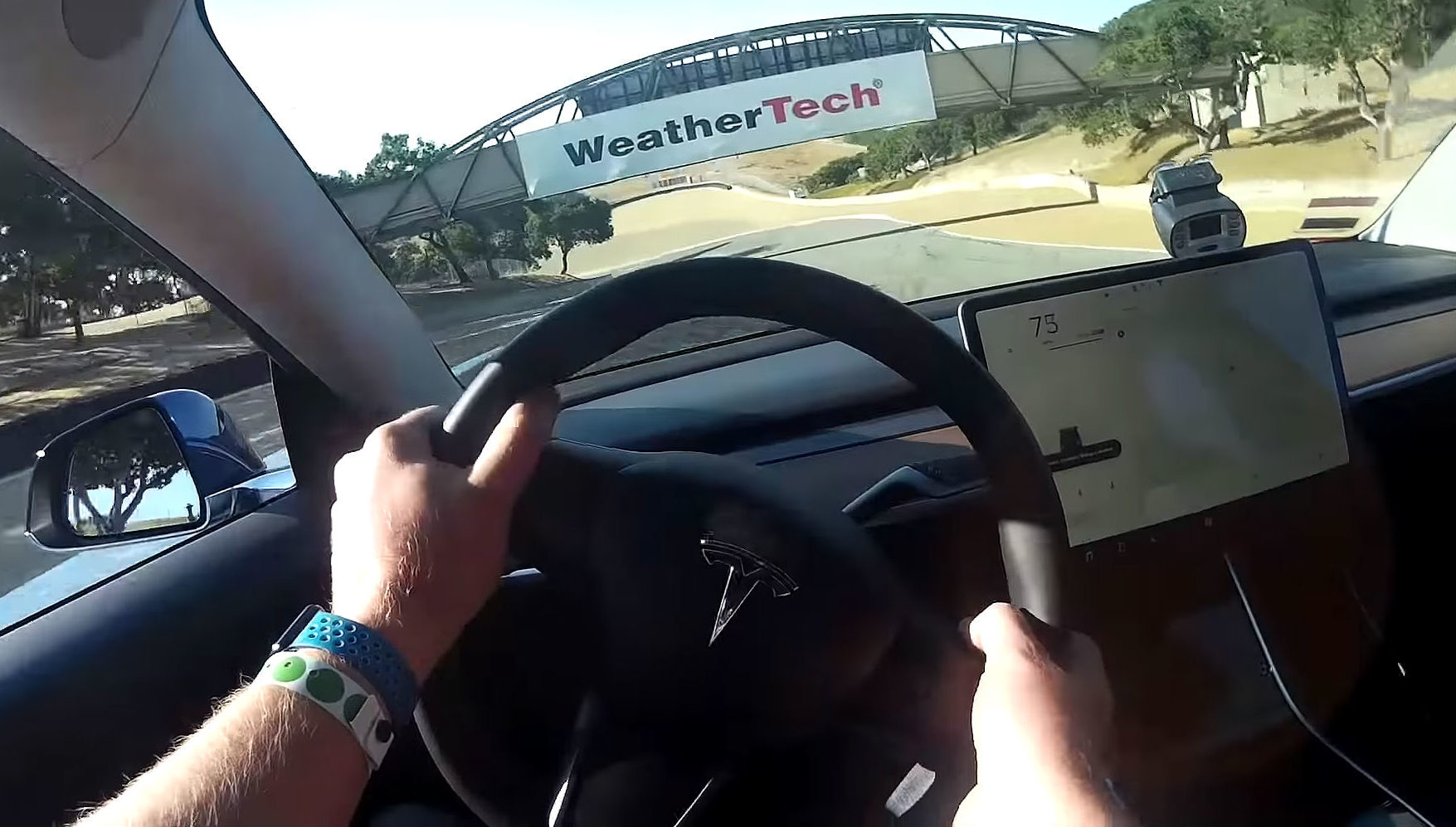 The Tesla Model 3’s recent feat was shared with Teslarati by car enthusiast and driver Cameron Rogers. According to Cameron, he first drove the Model 3 around the track on the vehicle’s stock tires. In this initial run, he was able to complete the course in 1:54. After changing his tires to racing slicks, however, the vehicle performed considerably better.

As noted by Cameron in a post on the Tesla Motors Club, his modifications to the Model 3 involved a set of Hawk Performance Blue 9012 Racing Brake Pads, Motul Dot 4 Racing Brake Fluid, a set of 18×9.5 Enkei RAIJIN 5×114.3 + 35 Hyper Silver Wheels, and Hoosier A7 slick tires. To provide him with more control during his drive, Cameron opted to disable the vehicle’s wheel speed sensor as well, allowing him to disable stability control and traction control.

The results of the Model 3 run with the Hoosier slicks were notably better, with the compact electric car completing the course in 1:48.6 seconds. Such figures place the non-Performance Long Range RWD Model 3 above records of gasoline vehicles in its class such as the Honda S2000 (1.50.74), BMW Z3 3 (1:50.80), Subaru BRZ (1:51.30), and even a Porsche 911 Carrera (997), which has a record time of 1:51.80, according to results from FastestLaps.com. The Model 3’s 1:48.6 lap places the compact electric car just a hair away from the record set by the Mitsubishi Lancer Evolution IX — a vehicle iconic for its rally pedigree and its legendary 4-cylinder 2.0-liter 4G63 engine. The Evo IX currently has a 1:47.93 record on the Laguna Seca Raceway.

Perhaps even more notable, however, was that the Model 3 was able to complete its laps without running into any overheating issues similar to those exhibited by early Model S’ when driven hard on the track for extended periods of time. According to Cameron, he was able to complete a total of 15 laps around the track during the entire day without any issues.

The Model 3’s recent feat at the Laguna Seca Raceway stands as yet another proof that the compact electric car is capable on the racetrack. Just recently, a Model 3 with upgraded suspension and brakes, finished in first place at the Canadian Sport Compact Series Time Attack series, defeating a Porsche Boxter in the process.

It should be noted, however, that the Model 3 on the road today are not the Performance versions of the electric car. The dual motor Model 3 Performance, a variant of the electric car with a 0-60 mph time of 3.5 seconds and a top speed of 155 mph, is expected to be 15% faster on the track than a BMW M3.

Watch the Model 3’s hot lap around the Laguna Seca Raceway in the video below.