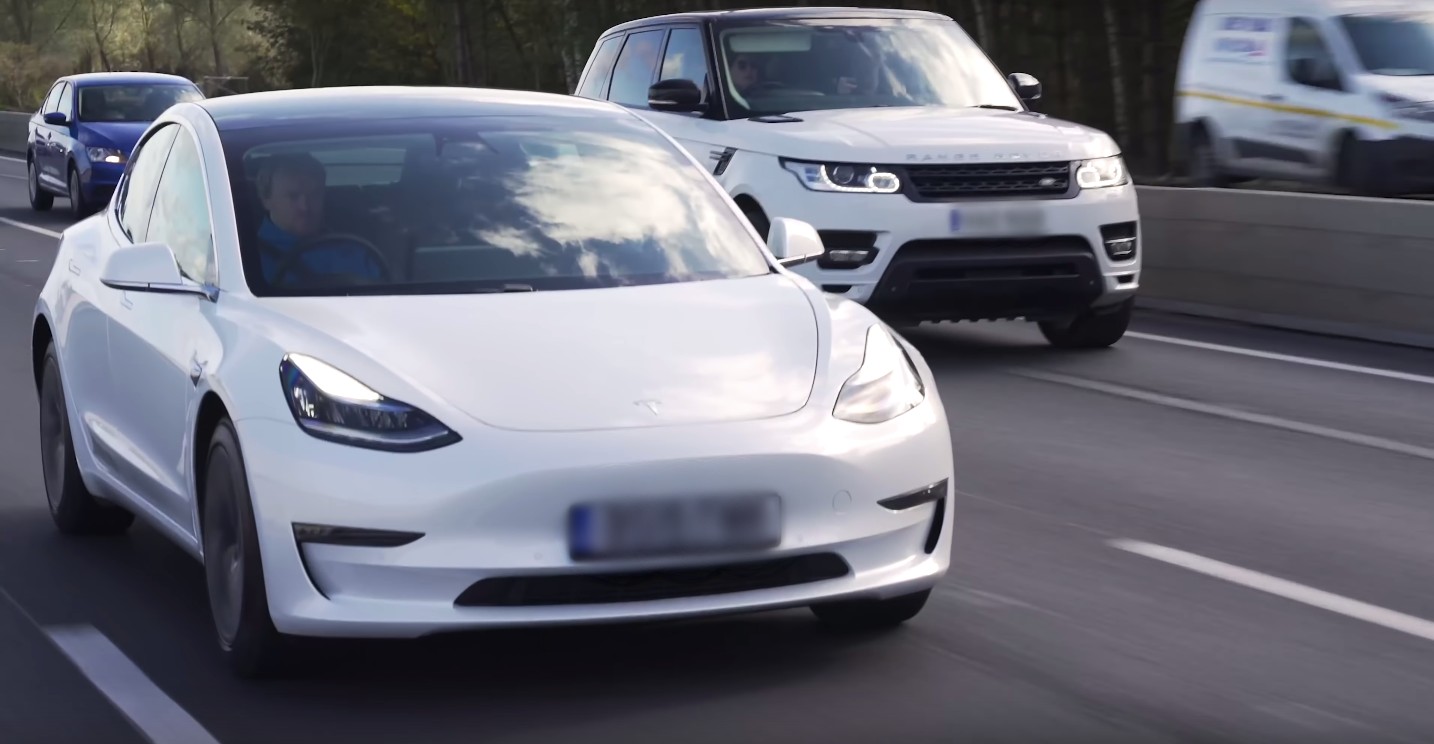 Tesla Model 3 goes up against Audi, Jaguar and top EVs in test to 0% battery state of charge

A Tesla Model 3 was put up against a lineup of the world’s most popular electric vehicles in a test to see what car’s battery could outlast the rest. The assessment performed by popular British YouTube channel Carwow tested six fully-charged electric cars by driving them until they died.

Carwow chose the Model 3 Long Range AWD, Audi e-tron, Jaguar I-Pace, Nissan Leaf, Kia e-Niro and Mercedes EQC for the experiment. Each vehicle was driven along a highway in the United Kingdom to determine what electric car had the best range and battery performance.

The test was performed by utilizing a system that included driving at the same speed on the same stretch of road at the same time. Each vehicle was put into its most energy-efficient setting and was operating with its air conditioning at 68 degrees Fahrenheit. The consistency showed there was no bias in the actual execution of the assessment, making it completely fair for all vehicles that were chosen to partake in the test.

Each vehicle was charged the night before the test. At the time the testing began, each vehicle held at least a 95% charge. While other variables like external temperature may have affected the performance of each vehicle, it was still an even playing field. By the end, Carwow would be able to tell electric car enthusiasts what vehicle was best suited for long-range driving.

By the conclusion of the test, a clear winner had emerged. It was the Tesla Model 3.

The Model 3 lasted a total of 270 miles, outlasting its closest competitor in the Kia e-Niro that ran out of battery at 255 miles. While the 75 kWh battery of the Model 3 Long Range AWD was the longest-lasting in the test, we must ask ourselves if it is really a surprise.

The other vehicle’s performance is as follows:

Tesla’s battery technology has been the benchmark of the electric vehicle industry. Tesla has emerged with range and performance that puts it head and shoulders above the rest of the sector.

Among recent developments and improvements in the company’s battery technology, Tesla recently filed a patent for an electrolyte solution that could bring Elon Musk’s vision of a million-mile battery to light. Tesla’s emergence as a leader in lithium-ion battery technology comes after the company sought out the help of Jeff Dahn of Dalhousie University. Dahn and a team of researchers at the Canadian University state that Tesla batteries should be able to last one million miles if utilized in grid energy storage.

The test performed by Carwow is just another indicator of Tesla’s world-class battery performance. Tesla’s acquisition of battery companies Maxwell Technologies and Hibar Systems last year further solidified the company’s thirst for increased battery performance. As the Model 3 was the longest-lasting vehicle in this test, it is another feather in the cap of Tesla.

Tesla Model 3 goes up against Audi, Jaguar and top EVs in test to 0% battery state of charge