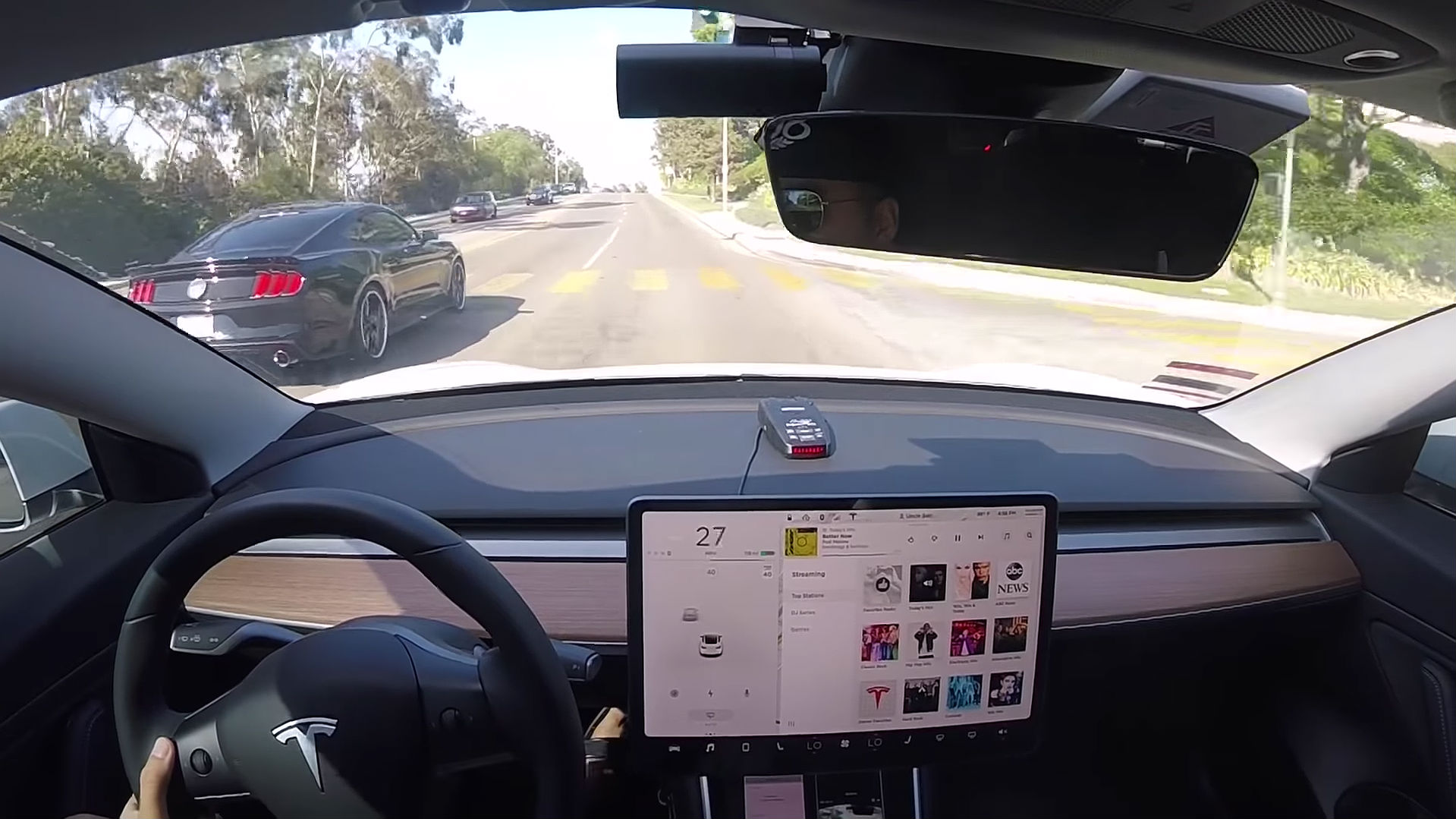 Looking at the listed performance specs for the Long Range Tesla Model 3 in single motor configuration, the vehicle’s 0-60 mph time of 5.1 seconds and a top speed of 140 mph isn’t the frightening power and acceleration of Tesla’s flagship sedan, the dual motor Model S P100D. Tesla’s exotic car killer is capable of sprinting to 60 mph in 2.3 seconds on Ludicrous Mode and holds the title as winner of Motor Trend’s “World’s Greatest Drag Race.” Nevertheless, a recent video shot in the perspective of a Model 3 driver shows how even a single motor, Tesla’s more modestly specced all-electric powertrain is impressively quick and capable of turning impromptu stop light challenges from high-performance gas-powered cars into child’s play.

A Model 3 owner who runs the YouTube channel TeslaExposed recently posted a video featuring a casual acceleration test against a Ford Mustang GT. On paper, the matchup between the Long Range RWD Model 3 and a 2015 Ford Mustang GT look compelling. Between the two vehicles, the Mustang GT actually has the edge in terms of listed performance specs, with its 0-60 mph time of 4.4 seconds and its top speed of 164 mph. The 2015 iteration of the American-bred muscle car is powered by a 5.0-liter DOHC 32-valve V8 engine with 435 hp that produces 400 lb-ft of torque. The high-performance car, just like its predecessors from years past, is also equipped with a 6-speed manual transmission.

On the other hand, the Long Range Tesla Model 3 is equipped with a single 192 kW AC three-phase permanent magnet electric motor that produces instant torque off the line. It is also fitted with a battery pack comprised of Tesla’s new 2170 cells, which give the electric car a range of 310 miles per single charge.

The race between the  performance vehicle and the electric car started when the light turned green. The driver of the Model 3 had a pretty bad start, stepping on the accelerator noticeably after the 2015 Ford Mustang GT’s driver. While the Mustang GT commanded an early lead, it only took a split second for the Model 3 to overtake the American muscle car with authority. Needless to say, the first-person view from the driver’s seat shows Tesla’s rather conservative Long Range RWD Model 3 is plenty quick.

Tesla is currently beginning deliveries of the Model 3 Performance, the top-tier variant of the electric car, to reservation holders. The Model 3 Performance is equipped with dual electric motors that produce a combined 450 hp and 471 lb-ft of torque. The vehicle, which Elon Musk states would be 15% faster than a BMW M3 on the track, is listed with a 0-60 mph time of 3.5 seconds and a top speed of 155 mph. Just like Model 3 in a single motor configuration, Model 3 Performance is capable of traveling 310 miles on a single charge.